In its dual function as state library and university library, the library provides users and institutions from the state of Bremen and the Lower Weser region with scientific and regionally related literature. Special collecting areas were journalism and journalism as well as mass communication and the theory and history of the press within the framework of funding from the German Research Foundation up to and including 1997. As a library for the country Bremen collects Bremensien . As the archive and state library of the Free Hanseatic City of Bremen, it exercises the right to deposit copies. Around 95% of all media acquired from 1966 onwards are included in the online catalog.

In 1628 Gerlach Buxdorff , Bremer Syndicus , left his books to the city. In 1646 the Bremen council bought the books and manuscripts of the scholar Melchior Goldast von Haiminsfeld . This included 2,000 volumes, u. a. the famous pericopes of Henry III. In 1660 these holdings became the Bibliotheka Bremensis , Bremer's first scientific, public library in the Dominican monastery of St. Katharinen , the seat of the Latin school founded in 1528 and expanded into an illustrious high school in 1610 . At the end of the 18th century, the holdings were taken over by Johann Philipp Cassel . These regionally and locally interesting holdings form the heart of the Bremen collection. 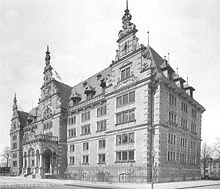 Building of the city library (later the state library) on Breitenweg. Erected in 1897 by Johann Georg Poppe , largely destroyed in 1942.

The librarian Johann Georg Kohl produced a comprehensive catalog between 1863 and 1878. The librarian Heinrich Bulthaupt managed to have a new building built. In 1897 the library building, which was designed by the architect Johann Georg Poppe , was built and inaugurated on Breitenweg (today the CinemaxX cinema) .

From May 1, 1922 until the departure in 1940, the headquarters of the reading hall in Bremen had to relocate its operations to the basement of the State Library, as the assets of the sponsoring association had been completely drained due to inflation and the state only marginally supported the continued existence.

In 1927 the scientific city library was named Bremen State Library

In the course of the national socialist control of the synchronization of the entire literature business, a reorganization of the library system also took place in Bremen between 1933 and 1937. Right at the beginning, the reading room was nationalized. The director of the State Library, Hinrich Knittermeyer , took over provisional management until 1936 and "cleaned up" the holdings by 25% in accordance with National Socialist ideology - from 29,000 to 22,000 volumes.

In 1939 the State Library had 284,000 volumes, 218 incunabula and 1,660 manuscripts. Valuable holdings were relocated during the war, including to Wernigerode Castle . The library building was hit by bombs in 1944 and poorly repaired. From 1945 to 1950, Hermann Entholt was director of the rebuilding of the library. In 1948 the State Library was able to resume operations after the repatriation of many of the relocated holdings. The stocks that remained in the GDR and those stored in the Soviet Union ( Tbilisi University Library , Georgia ) could be returned from 1989 onwards. Only in 1998 and 2000 did further holdings of valuable 575 manuscripts from Yerevan ( Armenia ) follow . Store other outsourced stocks and a. still in St. Petersburg , Moscow and Tomsk .

By 1964 the State Library had a collection of 350,000 volumes. In 1965, when the university was founded, it was decided that the future university library would be connected to the existing state library. The director of the State Library, Rolf Kluth , developed the concept of a scientific library with a substantial collection in an open access list . The users, the advising librarians and the free-standing books should be on the same floor level so that the contact between them could be as seamless as possible. In 1975 the new building on the university campus was inaugurated.

In 1982, the library was given the task of supplying the Bremen universities with literature.

The old building on Breitenweg served the Überseemuseum as a warehouse for a few years until it had to give way to a large cinema in 1999.

The Pericope Book of Henry III. (1039-1043), an important work of Ottonian book illumination in the holdings of the SuUB

The historical holdings today include 2,063 manuscripts , 3,800 historical maps and views, 84 Greek papyri , 64 bequests and an extensive collection of autographs. Around 70,000 bibliographical units were printed before 1899.

In the main building there are a total of 490 workplaces, including 186 internet workplaces, 23 individual work rooms and 5 group work rooms with 72 places.

The SuUB has the following special offers:

The campus of the University of Bremen from above

On the basis of structural plans from 1965 by the head of the then Bremen State Library, Rolf Kluth, the university library was designed by the University Building Department (architects Eberhard Kaiser, Roland Kutzki ; interior designer Rainer Tietmann) and built from 1971 to the end of 1974.

The five-story building on the central axis of the university is a rectangular building measuring around 70 × 80 meters on the upper floors. The reinforced concrete structure has a shell grid of the rounded columns of 7.20 meters and an expansion grid offset by 0.60 meters for the flexible walls of 1.20 meters. A considerable technical expansion with air conditioning systems, conveyor systems, safety systems, vacuum cleaning systems, and rolling shelving systems was necessary. The air conditioning required for the size of the room and the assignment of the library staff in the individual rooms without corridor separation on levels 2 and 3 did not meet with broad approval from these employees from the start.

The building was designed for a capacity of around 2 million volumes (with a compact arrangement of 2.5 million volumes), of which over 0.8 million volumes should be accessible hands-free. In addition, up to 200 employees and around 750 reading spaces were created.

The following are accommodated:

In the 1990s, a planned expansion of the magazine took place on level 0.

The library was technically modernized from 2002 to 2004 as part of a funding concept for the “energetic improvement of the building fabric”. The energy saving potentials of fully air-conditioned buildings from the 1960s and 1970s were shown. The entire renovation measures were financed with EUR 14.5 million by the federal government and the state of Bremen. The primary goals of the renovation were to reduce energy consumption by more than 50%. From 2013 to 2014 the magazine reading room and the entrance area were renovated. The aim of the renovation measures is to expand the cloakroom area, to redesign the magazine reading room, to set up a group learning room with multimedia equipment and to set up a small cafeteria.

In November 2016, the library received a four-story book tower to hold around 725,000 books, which are set up on mobile shelves. The white, expandable building was erected over the roof of the magazine according to plans by Jens Kruse.

The State and University Library Bremen is located on the campus of the University of Bremen. With the Bremen Technology Park, the campus forms almost a separate district on the outskirts of Bremen and is conveniently located on the A27 with its own exit. The university can also be easily reached by bus (lines 20, 21, 22, 28, 630, 670) or tram. There are three tram line 6 stops on campus .

The library is housed in a central building. In addition to the main building (Uni; Bibliothekstrasse) there are nine other decentralized locations:

The user can obtain information from the central information office, the lending office, interlibrary loan, the specialist advisors in the departments, information technology and the library's press and public relations office (for current addresses, see the WEB)

The SuUB was headed by Rolf Kluth when it was founded . She is currently headed by Maria Elisabeth Müller with the Departments for Use and Administration as well as the department heads for natural sciences, social sciences, cultural sciences and the special department and the information technology department.

The electronic library of the State and University Library Bremen is a virtual library that has existed since 1998 , which makes available both the physically existing library holdings of the SuUB Bremen as well as free or licensed electronic media . For more information, see there.