The former St. Catherine's Monastery of the Dominicans in Bremen is as a building only in small parts. It existed in its original function from 1253 to 1528. The monastery was located in the old town between Sögestraße , Unser-Lieben-Frauen-Kirchhof , Schüsselkorb and Domshof in the area of ​​today's Katharinen-Hochgarage.

The Dominicans settled in Bremen in 1225. Possibly they took over the buildings of a Cistercian convent founded in 1185 but then abandoned. [X] Presumably they soon began to expand the monastery buildings and the church mentioned in 1253. First, the Dominicans helped in Stedingerkrieg the Archbishopric of Bremen in his "crusade" against the Stedinger farmers who in the 1234 Battle of Altenesch lost the war and their freedom. From the 13th to the 16th century, the Dominicans worked in catechesis in addition to their pastoral duties.

In 1253 the council donated a building site to the convent , presumably the place where a second church, consecrated in 1284 , was built. This basilica was converted into a transeptless hall church in the 15th century , a condition that is still shown in the watercolor by Polzin around 1810. Its towerless facade faced Sögestraße, and the polygonal choir, which had also been converted, was temporarily visible from the bowl basket. A mighty saddle roof, similar to that of St. Johann , the other large mendicant order church in Bremen, covered the nave. To the south of the church, along Sögestraße, the cloister courtyard with the cloister , the farm yard , the remter ( refectory ) and the other living and utility rooms were connected.

The former refectory as a restaurant (photo 2018)

The Bremen armory around 1811 in the former Katharinenkirche, watercolor by Polzin

In 1524 the Reformation had prevailed in Bremen. Masses were no longer read at the parish churches, but Protestant preachers were appointed. The Dominicans did not follow the new teaching, which is why the first friars - including the prior and the reading master - were expelled in the same year . The monastery was closed in 1528. 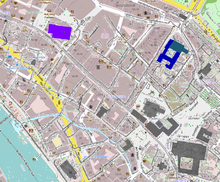 From 1597 the nave was used as a municipal armory , in 1820 it was converted into a packing house, and in 1888 most of it fell victim to the construction of a new commercial building on the corner of Sögestraße / Schüsselkorb. The choir that had stood still was placed under monument protection in 1909 and also survived the Second World War. Nevertheless, it was demolished in 1960 in order to widen the bowl basket. In addition to the typical bricks in the monastery format , older, smaller bricks (such as those of the Verden cathedral tower ), possibly remnants of the Cistercian building , can be seen on film recordings of the demolition .

The monastery buildings were also rededicated after the Reformation. The Protestant school of scholars (Latin school) began here in 1528, was expanded to become an academy in 1584 and from 1610 was called Gymnasium illustrious , a hybrid between higher and higher education. Their library was expanded into the public city library in 1660 and remained there until the move to the new building of what would later become the state library on Breitenweg in 1896. Meanwhile, high school operations had relocated to the Domshof and its neighborhood by 1820, but Heinrich Graefe's public school moved in 1855 ( 1868: Realschule in the old town ) and remained in this repeatedly redesigned building complex until it was destroyed in the Second World War, which in the meantime also housed a pawn shop (1817) and the Historical Museum (1898).

The remains of the monastery - some vaults of the cloister and the refectory  - are now built over with the Katharinen-Hochgarage and Katharinen-Passage and are used for gastronomic purposes. They have been a listed building since 1973 . Incidentally, only the names Katharinenstraße, Katharinenklosterhof and Katharinenpassage remind of the Dominican church and convent. Only between 1966 and 1988 did the order return to Bremen; first in the parish of St. Hedwig in the Neue Vahr and from 1968 in St. Ursula in Schwachhausen .