The Hebrew University of Jerusalem ( Hebrew האוניברסיטה העברית בירושלים ha'universita ha'ivrit biruschalayim ; Arabic الجامعة العبرية في القدس, DMG al-ǧāmi'a al-'ibriyya fī'l-quds ) is the second oldest and at the same time most important university in Israel with a worldwide reputation. Asher Cohen has been President of the University since 2017 . The university’s first board positions were held by Albert Einstein , Sigmund Freud , Martin Buber , Chaim Bialik and Chaim Weizmann , among others . Four of Israel's nine prime ministers are graduates of the university, which is also associated with eight Nobel Prize winners and one Fields medalist .

Construction of the university clinic (1934)

Establishing a university in Israel was part of the Zionist vision from the start. Proposals were already made in the Katowice Conference of 1884 and in 1897 at the first Zionist Congress in Basel , this idea was pursued with the participation of Hermann Schapira . The idea of ​​founding a university in Jerusalem was then propagated in a leaflet by Chaim Weizmann , Martin Buber and Berthold Feiwel in 1902 . The Jewish physicist of German origin Albert Einstein was also among the proponents. He bequeathed his writings and possessions to the university. The building plot on Mount Scopus was acquired by Russian Zionists. Some parts of Mount Scopus, on which the university stands, were sold by Raghib to Naschaschibi . The original plan for the university buildings came from Sir Patrick Geddes , but only the national library, today's law faculty building, was carried out by them.

The foundation stone for the university was laid on July 24, 1918. The celebration was attended by General Allenby and Chaim Weizmann, who was the keynote speaker. In the mandate of Palestine , however, there was also opposition to the project, as some Zionist activists believed that an agrarian settlement of the country was more necessary. The university opened on April 1, 1925 with the three faculties of Microbiology , Chemistry and Jewish Studies . Lord Balfour , Chaim Weizmann, Abraham Isaak Kook , Herbert Samuel and Chaim Nachman Bialik spoke at the opening ceremony . Judah Leon Magnes was a founding member, chancellor from 1925 and first president from 1935 to 1948 . In its early years, the university was a research institution; formal teaching did not begin until 1928.

In the 1930s, the university offered many Jewish scientists who had to flee from Europe before the National Socialists a new place of work. Among them Hans Jakob Polotsky , who founded the linguistic department of the university, Ladislaus Farkas , who founded the department for physical chemistry in 1935 , Bernhard Zondek professor for gynecology, Chanoch Albeck , professor and later head of the Talmud faculty and Martin Buber .

During the Israeli War of Independence in 1948/1949 Mount Scopus was cut off from the rest of Israeli Jerusalem and formed an Israeli exclave. Teaching and learning at the university had to be relocated. To this end, the Givat Ram Campus, inaugurated in 1958, and the En Kerem Campus in western Jerusalem were built. It was not until 1969, after the Israeli armed forces occupied East Jerusalem in the Six Day War , that the campus on Mount Scopus was reopened and expanded and has been the center of the university again since 1981. The university also has the Agricultural Faculty in Rechovot , which is also a member of the Euroleague for Life Sciences .

When Crossair Flight 3597 the dean of the medical faculty, Yaakov Matzner was killed on 24 November 2,001th

During the 2nd Intifada , on July 31, 2002 , the terrorist group Hamas dropped a bomb in a cafeteria of the Frank Sinatra International Study Center. Nine people, including five Americans, were killed and about 100 injured.

The Hebrew University covers almost all areas of the natural, human and social sciences. It has seven faculties, 14 departments and around 90 research institutes. Faculties include the humanities, social sciences, natural sciences, agricultural sciences, medicine, dentistry, and law. The departments include a. Education, Social Work, Nursing, Pharmacy, Veterinary Medicine, and Nutrition. Since the university was founded, more than 95,000 graduates have received their diplomas. There are currently around 20,000 students studying at the Hebrew University. Another 10,000 take part in additional studies and supplementary programs. The university is actually spread over 4 locations (campus): 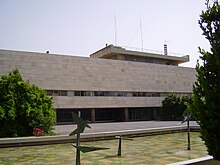 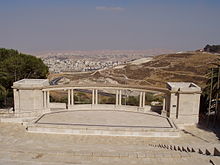 On the after plans Richard Kauffmann , Ossip Clear wine and Heinz Raus scale Mount Scopus - Campus (Heb .: Har Hatzofim הר הצופים) located in the eastern part of Jerusalem from the Faculty of Human Sciences, the Institute of urban and regional research where the Floersheimer Studies housed is. Also on Mount Scopus are the Faculty of Law and Business Administration and the Rothberg International School , which in 1978 founded International Frank Sinatra Student Center , the Harry S. Truman Research Institute for the Advancement of Peace , the Mandel Institute of Jewish Studies (Jewish Studies) and the new School of Public Policy (political science). The Hecht Synagogue, built in 1981, is also located on the site of Mount Skopus .

The Givat Ram Campus, named after Edmond Safra , houses the science institutes. There is also the National and University Library of the State of Israel, which contains around five million volumes. It represents the world's largest collection of Hebrew books. The library includes the monumental stained glass windows by Mordechai Ardon .

In En Kerem , the campus is also the site of the Hadassah En Kerem Hospital (Hadassah Clinic for Medicine, Dentistry and Molecular Biology ).

The veterinary and agricultural faculties (agricultural sciences) are located in Rehovot . 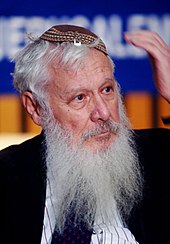 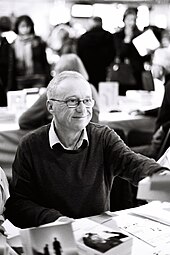 In the current international university rankings, the university is usually included in the best 150 or 200 universities in the world (as of 2017):

Friends of the University of Jerusalem in Germany V. (Berlin)

In October 2014, 343 UK university professors and lecturers (including Patrick Bateson from the University of Cambridge , Ted Honderich from University College London , TWB Kibble from Imperial College London and Richard Sennett from the London School of Economics ) signed against, along the lines of the boycott South Africa under the apartheid regime called for an academic boycott of Israeli universities, as they are involved in Israeli violations of international law . An example of this involvement is highlighted at the Hebrew University of Jerusalem, which is "involved in the seizure of Palestinian land as it expands into Occupied Palestinian Territory" and "some of the university student accommodation is in an illegal Israeli settlement" ( French Hill ) in occupied East Jerusalem .

The Hebrew University responded to a similar boycott call by the British Association of University Teachers in 2005 with a joint statement with al-Quds University . The declaration signed by the then presidents Menachem Magidor and Sari Nusseibeh calls for academic cooperation and confirms the continuation of the cooperation between the two Jerusalem universities in terms of a peaceful solution to the Middle East conflict.

The boycott movement has in the past u. a. accused by the Anti-Defamation League and the Simon Wiesenthal Center of anti-Semitism because they only attack Israeli institutions, while elsewhere actual or supposed breaches of international law (for example by China in Tibet ) are not countered with similar campaigns.