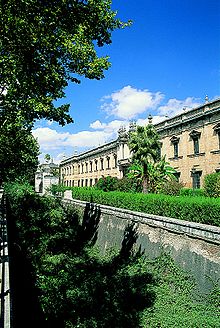 The University of Seville ( Spanish : Universidad de Sevilla ) is one of the largest public universities in Spain with 73,350 students (2004) and is based in the city of Seville in Andalusia .

In the mid-13th century, the Dominicans organized schools to teach Arabic, Hebrew, and Greek for missions. Alfonso the Wise founded escuelas generales in 1254 . Pope Alexander IV recognized them as generale litterarum studium in the bull of June 21, 1260. Rodrigo Fernández de Santaella began building a building for a university in 1472, which was founded in 1502 by the Catholic monarchs and confirmed in 1505 by Pope Julius II . As is usually the case, degrees were in theology , philosophy , law and medicine .

Since March 2002 the university has provided the entire data storage for the Spanish-language Enciclopedia Libre .

There are five institutes with a total of 122 departments. The university has exchanges with the US University of Virginia's College at Wise in Virginia (since 2000).