The history of the University of Valladolid is deeply rooted in the city's history. This is because it has had an important, above all cultural, influence on the city. At first the university was represented in the colegiata , in the collegiate church, then it moved to the opposite side of the square in Valladolid to the Facultad de Derecho . 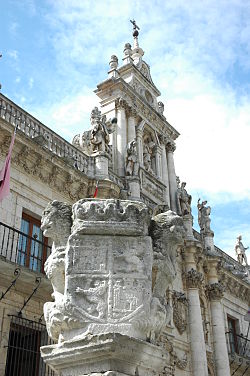 Baroque facade (1715) of the university

The first building worth mentioning due to its construction was built at the end of the fifteenth century. The new building, which was occupied after the collegiate church, consisted of a four-sided cloister , which opens into the hall, which is a former Gothic chapel of large dimensions. Furthermore, the cloister opens into a Gothic portal that leads to a bookstore street.

At the beginning of the 18th century it became necessary to expand the university building, which would then lead to various corridors. From the Santa María square you can see the facade, built in 1715, which is baroque in style and designed by Fray Pedro de la Visitación. You can also see various figures that have allegorical value. The central section, which can be recognized by the four columns depicting giants, is ended by an equally large crest.

1909 saw the controversial decision to tear down the 15th century building to replace it with a modern building designed by Teodosio Torres. Only the baroque facade was not touched, although it was clear that it could be damaged by the renovations.

The design by Torres showed two cloisters. A large staircase was placed between the two cloisters and a large vestibule led to Bucherstrasse.

In 1939 the university building suffered a fire. Since the problem of the facade was still not integrated, Constantino Candeira was commissioned to draw up a new plan. He created a large staircase and a hall, which were stylistically in harmony with the facade.

In 1968 the demolition of the two cloisters was completed and the construction of a five-story building for students began. In the course of the demolition process, the observatory tower and the auditorium, both of which were built in 1909, also fell. The facade facing Libería has been redesigned and thus also detached from the traces of the architect Torres. The new auditorium now flanks Candeira's facade.