from Wikipedia, the free encyclopedia
This is the spotted version , flagged on January 22, 2019 . There is 1 pending change that has yet to be viewed. 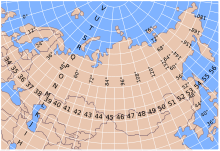 Map index of the International World Map for North and Central Asia. The northern hemisphere is prefixed N .

For 90% of the earth's surface is the sheet line of the card in plant geographical latitude 4 °, in length 6 °. This corresponds to a north-south expansion of the map sheets of 445 km, while in east-west direction at the equator it is 670 km, at 60 ° latitude it is half. For the few leaves beyond 60 °, the length range is doubled to 12 ° because the meridians converge towards the poles.

Of the planned 1,800 map sheets (30 width zones of 60 sheets each) only just under half were printed because the production of an aeronautical map of the same scale was more urgent.

The idea of ​​creating a globally standardized map series goes back to the German geographer Albrecht Penck (1858–1945) who, at a congress in 1891, suggested creating a total of 2500 maps of the entire surface of the earth based on uniform standards. Each of these maps should cover four degrees of latitude and six degrees of longitude .

The standards were set at an international conference in 1913. The respective countries should be responsible for creating the individual maps. By the beginning of the First World War , however, only eight maps could be completed.

In the 1920s and 1930s, 405 cards were issued worldwide. The Second World War , however, caused the project a serious setback, as, among other things, the Central Bureau of the Map of the World at the official map authority of Great Britain ( Ordnance Survey ), along with its maps and archives, was destroyed in bomb attacks.

In 1953 the United Nations took control of the project. Many countries showed less interest in the implementation over the years, partly due to similar (but more urgent) aeronautical chart projects . In 1980 the regular reports on the progress of the project were stopped. In total, only 800 maps were completed, which largely cover the mainland and island areas of the world. However, many of the maps do not adhere to the agreed IWK specifications in terms of color and character code, so that the original goal of a uniform map series was not achieved.

Since some of the map material is no longer being continued, many sheets are out of date. In practical use as an international map series, the international world map has been replaced by the Operational Navigation Chart (ONC), which was developed under the leadership of the USA .

As a projection for the representation of the earth on a scale of 1: 1 million, the Lambertian conical projection was used in the IWK . A new cone is used as a basis for each row of cards.

The world's largest rotatable globe, Eartha, uses the same scale as the international map of the world at 1: 1 million and has a diameter of 12.52 meters.

Commons : International Map of the World  - collection of images, videos and audio files