from Wikipedia, the free encyclopedia
This is the spotted version , flagged on July 25, 2020 . There is 1 pending change that has yet to be viewed.
lf lb le ls lh

The German twin town of Deinze is Rheinbach near Bonn.

The city, about 20 km southwest of Ghent , was first mentioned in 890 under the name Donsa and lies on the Leie river . The flax industry flourished here from the Middle Ages until after the First World War . In May 1940, members addressed the 225th Infantry Division (Wehrmacht) the vinkt massacre named after a district of.

On January 1, 2019, Deinze merged with the neighboring municipality of Nevele .

The Deinze poultry market is of national importance; the prices for poultry and eggs determined there every Wednesday are important key data for the European Union.

Liebfrauenkirche and drawbridge in the city center of Deinze 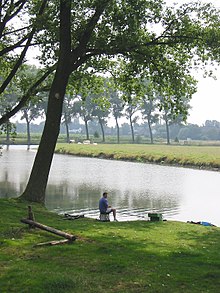 Fishermen's paradise on the old Leie

Ooidonk Castle was built in 1595 in the Spanish-Flemish style on the foundations of a burned-down fortress and is one of the most magnificent castles in Belgium. In addition, there is the Liebfrauen parish church from the 13th century , with its valuable furnishings from the 18th century . This church is a wonderful example of the Scheldt Gothic . In the sub-municipality of Astene you can find a 5 km long cut arm of the Leie . This is a true fishermen's paradise.

In 2021 Deinze will host the 20th  European Shooting Festival , an event of the European Community of Historical Shooting .

Municipalities in the Belgian province of East Flanders