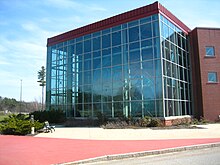 Eartha is located in an exhibition building with large glass walls of the DeLorme publishing house, which specializes in cartography and geographic information systems, in Yarmouth , Maine (USA) right next to US Highway 1 . It was completed on July 23, 1998. The globe is illuminated at night. Visitors can view it from the ground and its upper regions from two balconies.

One millimeter on Earth is actually one kilometer. The globe was created from a unified database using satellite images , relief shading , regional colors ( bathymetric coloring of the seas) and data on streets and urban areas.

As with most globes, Eartha's axis of rotation is tilted 23.5 ° from the vertical to represent the tilt of the earth's axis from the ecliptic . Eartha rotates on a cantilever , powered by two motors. Normally the globe completes one revolution in 18 minutes, but a higher speed level is also possible, at which it completes one complete revolution in one minute. Due to an engine failure in 2006, the globe stood still until it was repaired in 2007.

Eartha is constructed around a structure called Omni-Span made of over 6000 aluminum tubes . These are clad with a covering of 792 map panels, each of which comprises eight degrees of latitude and ten degrees of longitude and is mounted on the inner structure with hidden bolts.