As Maps small scaled are topographic maps referred that provide an overview of settlements, transport links and topography of a larger area. The map scale depends on the intended use and is usually in the range from 1: 200,000 to 1: 1 million, in which the predominant terrain forms can still be seen.

In some geosciences such as geology or hydrology or for navigation and aeronautical maps , scales of up to 1: 2 million are also used, where the topography can only be represented in a highly generalized manner.

State overview maps usually have a scale of 1: 500,000, for example maps of German federal states or the Austrian map ÖK 500 . Since almost all official maps are subject to copyright, only a less detailed overview map can be shown as an example (right), as it is suitable for a school atlas .

The most common aeronautical charts also have a scale of 1: 500,000 - see ICAO chart . Worldwide map series 1: 1 million are the International World Map (IWK) and the Operational Navigation Chart (ONC). Even smaller is z. B. the world map 1: 2.5 million .

While geological maps are usually on the scale of detailed maps - usually 1: 50,000 - for field work, smaller-scale documents are necessary for many overview and planning tasks . Most federal states (Germany, Austria) or regions (e.g. in Italy, France) therefore issue overview maps for tectonics and rock types on a scale of 1: 200,000 to 1: 500,000, states or larger regions often also 1: 1 million to 1: 2 Millions.

The first geological overview map was published in 1815 by William Smith of the rocks of Great Britain. 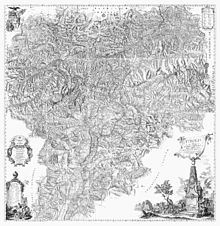 The Tabula Peutingeriana , a road map of the late Roman Empire, is one of the earliest, though by no means true to scale, overview maps . From the 7th century onwards, large continental areas were mapped as mappa mundi (world or bike maps). The medieval portolans , which covered the Mediterranean coast well, but hardly the interior of the country, were much more precise . The overview maps, which were only sparsely available up to the 17th century, were criticized. a. Johannes Kepler the lack of area or angle fidelity . A rare exception are the very precise maps of flat areas in northern Germany by Tilemann Stella (1525–1589) or the Thuringian land table by Adolar Erich from around 1650. A more accurate and detailed representation of the terrain did not develop until the 18th century. through military geography , while in the mountains the Atlas Tyrolensis by Peter Anich (1723–1766) remained unmatched for a long time. Its original scale of 1: 103.800 was an extremely precise map at that time and corresponds in detail to a modern general map on only a slightly smaller scale. The synopsis of the 20 sheets (1: 545,000, picture above left) practically represents an overview map in today's sense.

The systematic land surveys in France and Central Europe, beginning around 1870, marked a significant further development . B. the above map of the Reims region or in Austria-Hungary the Franzisco-Josephinische Landesaufnahme . On this basis, the so-called general maps were created on a scale of 1: 144,000 and 1: 200,000, which were still hatched maps , but geometrically already meet today's requirements. At the same time, the atlas cartography also developed the comprehensive representation of very large areas in physical maps .

Maps for special purposes and tourism

In some subject areas, the overview or overview map is also used for cartographic representations that only give a schematic overview of the geographical location of special objects - for example of tourist destinations, the course of military operations or of service or industrial companies . The possible scale range is wider than mentioned above, depending on the area to be covered. In surveying, on the other hand, there is the fixed point overview , in which all fixed points of a district are listed. Because of the attention to detail, the scale here is 1: 10,000 to 1: 50,000.