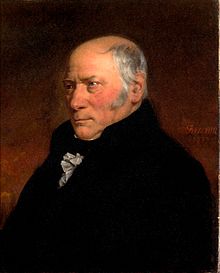 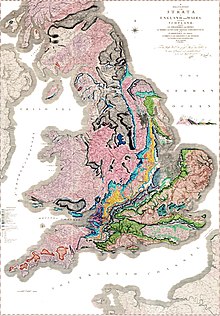 William Smith [ ˈwɪlɪəm ˈsmɪθ ] (born March 23, 1769 in Churchill, Oxfordshire , † August 28, 1839 in Northampton ) created the first geological map for Great Britain and is considered the founder of British geology and stratigraphy . In 1831 he received the Wollaston Medal, which was awarded for the first time .

As an engineer , Smith noticed while building a canal that some fossils were found only in specific layers. With this realization, he and others could geologist far apart outcropping rock strata due to similar characteristics correlate d. This means that they are stratigraphically assigned to the same level on the geological time table . This led to his nickname Strata Smith ("Layer Smith").

Based on this, Leopold von Buch and others were able to formulate the key fossil principle. His greatest work was the geological mapping of Great Britain published in 1815. As early as 1799 he published a map of the area around Bath .

Smith was the son of a blacksmith who came from a locally respected farming family. After losing his father at the age of eight, he grew up with his uncle, who was also named William Smith. Smith was essentially self-taught, read a lot, and showed an early tendency towards drawing and mathematics. In 1787 he became assistant to the surveyor Edward Webb from Stow-on-the-Wold ( Gloucestershire ). He made rapid progress in his apprenticeship and in 1791 was commissioned with surveying work at Sutton Court, Somerset . He spent the next eight years in the area, living in High Littleton , a village between Bristol and Bath . First he worked for Webb, then for the Somersetshire Coal Canal Company, a group of entrepreneurs who wanted to build a canal to transport coal from their pits. Construction began in 1795. While inspecting various coal mines in the area and while overseeing the excavation of the sewer, he made his first systematic observations and developed his ideas on stratigraphy . Around 1793 he recognized the similar arrangement of layers in different places, which could be characterized with guide fossils. He continued these observations while traveling in England in the following years. Until 1799 he was a surveyor for the Canal Company, hired by the engineer John Rennie senior . Then he worked, among other things, for landowners (surveying, drainage work), so 1800 for Thomas William Coke, 1st Earl of Leicester in Norfolk and 1801 for Francis Russell, 7th Duke of Bedford in Woburn. He also published his findings with pictures from his fossil collection, which included formations of the Jura in particular . While he had previously only taken profiles, he published a geological map of the area around Bath in 1799 (model was a colored soil map at the Somerset County Agricultural Society). In 1801 the first rough sketch of a geological map of England followed, for which he received support from Joseph Banks . During this time he traveled extensively around the country as a prospector for minerals. From 1811 to 1824 he published individual maps of the individual counties in England and Wales, and in 1815 an overall map was published that also included parts of Scotland. She received a prize of 50 guineas from the Society for the Encouragement of Arts, Manufactures and Commerce , which has been awarded since 1802 , for a mineralogical map of England and Wales. 250 copies had been sent to subscribers by March (there were probably around 400 copies in total, all numbered and hand-colored, fewer than a hundred are known). Also in 1815 he published an overview of the strata to be encountered and from 1816 to 1819 his book Strata identified by organized fossils followed . In 1817 he published a geological profile from Snowden to London.

At the same time he ran into financial difficulties. He had taken out loans and got lost in a quarry with a sawmill for building blocks that were of insufficient quality. Although he sold his fossil collection to the British Museum for £ 700, he was in debt prison in 1819 . His geological publications, printed at his own expense, did not bring the hoped-for profit and recognition, although he had contact with important personalities. He himself passed on information freely, and his work spread so quickly. After his release from guilty prison he worked again as a surveyor in the north of England, where he had no permanent residence. Sir John Johnstone recognized him and took the first steps to gain him recognition. From 1824 to 1825 he lectured in Yorkshire with his nephew John Phillips (later professor of geology at Oxford), and in 1828 his admirer Johnstone in Hackness near Scarborough offered him a position as land manager. He stayed there for five years and published a geological map of the Hackness Hills in 1832. In Scarborough he designed a geological museum built by Johnstone in 1829, the Rotunda (from 2008 William Smith Museum of Geology). In 1831 he was also recognized by the Geological Society of London as the first recipient of the Wollaston Medal , on which occasion Adam Sedgwick referred to him as the father of English geology . At a meeting of the British Association in Dublin in 1835 he received an honorary doctorate from Trinity College. In 1838 he was a member of the commission that selected the building block for the Palace of Westminster. He died in Northampton and is buried there in St. Peter's Church in Marefair.

The headquarters of the British Geological Survey in Keyworth was named after him in 2009. One of Smith's geological maps of Great Britain is on display in the Geological Society of London, which also has an oil portrait (Fourau 1837) of him. A large collection of his manuscripts is in the possession of Oxford University. Prior to the discovery of the manuscripts at Oxford in 1938, the biography of his nephew John Phillips was the main source for his biography.

He was interested in technical developments of his time and corresponded with Richard Trevithick about steam engines.