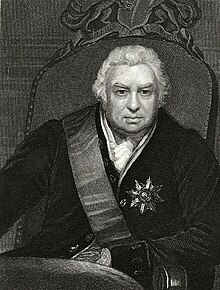 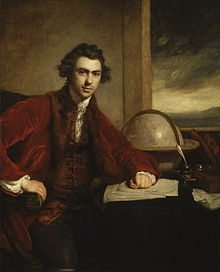 Banks based on a 1773 painting by Joshua Reynolds

Banks around fifteen years old. The artist of the painting, created in 1757, is not known. It has been attributed to Lemuel Francis Abbott and Johann Zoffany .

The following important information is missing from this article or section:
Its importance for the British crown ( Privy Council , confidante of George III. ) Is not even remotely represented.
Help Wikipedia by researching and pasting it .

Joseph Banks was born in Westminster as the only son of William Banks (1719–1761) and Sarah Banks, born Bate (1720–1804). The family home in Revesby Abbey , Lincolnshire had been bought by their great-grandfather in 1714.

The young Banks was initially homeschooled. From April 1752 he attended Harrow School and moved in September 1756 to Eton College . In December 1760 he entered Christ Church College, Oxford . Banks discovered his fondness for botany already in Eton and continued his studies in Oxford. As he came from a wealthy background, the 25-year-old contributed the same amount as the crown to the financing of James Cook's first expedition with the HMS Endeavor .

In 1766 he left England and went to Newfoundland and Labrador with Constantine John Phipps to conduct natural history studies. He described the plants and animals of northeastern North America. Banks described 34 species of birds, including the giant alca ( Alca impennis ), which became extinct in 1844.

Banks was appointed by the Royal Navy and the Royal Society as a participant in James Cook's scientific expedition to the South Pacific from 1768 to 1771. Banks had organized participation in this 1768 expedition well. He selected a staff of ten people. The 39-year-old botanist Daniel Solander was a student of Carl von Linné and also a member of the Royal Society. He had a lifelong friendship with Solander. Two artists were supposed to record the discoveries of the research trip: Sydney C. Parkinson the plants and Alexander Buchan the landscape. From this expedition he was the first to bring the eucalyptus , acacia and mimosa to Europe. The Endeavor traveled first to Brazil, then to other parts of South America. The scientific description of the bougainvillea (named after the French navigator Louis Antoine de Bougainville ) originated in Brazil . The journey then led to Tahiti , where the passage of Venus was to be observed, the actual task of this mission. It was followed by New Zealand and the east coast of Australia, where James Cook anchored in Botany Bay . Here the expedition spent almost seven weeks on land while the ship was being overhauled. During their stay in Australia, Banks, the Swedish botanist Daniel Solander and the Swedish-Finnish draftsman and naturalist Herman Spöring (1733–1771) created their first large collections of Australian flora and described many new species.

Further research trips took Banks to Tahiti, New Zealand, Australia ( Botany Bay , Port Jackson (now part of Sydney )) and Brazil. In 1772 he went on an expedition to Iceland with Solander with the St. Lawrence.

From 1773 he was the unofficial director of the Royal Gardens at Kew , which flourished under his influence. In 1774 he was accepted into the Society of Dilettanti . He was a founding member and was the driving force behind the African Association throughout his life . In 1779 he was elected a foreign member of the Göttingen Academy of Sciences . After his election as President of the Royal Society on March 24, 1781 he was bestowed the hereditary title of Baronet , of Revesby Abbey in the County of Lincoln . In 1795 he was accepted as a Knight Companion in the Bath Order and in 1815 Knight Grand Cross of the Bath Order. In March 1779 he married Dorothea Hugessen (1758-1828). They didn't have any children.

As the longest-serving President of the Royal Society from 1778 to 1820, he was in contact with leading researchers of his time. He initiated the Bounty's breadfruit expedition , led by Lieutenant William Bligh . Bligh served as an officer on the Resolution on Cook's third circumnavigation.

On the mediation of Robert Brown he hired John Lindley as an assistant librarian in 1819 . Lindley completed his writings after his death. Most of the correspondence from Banks' estate is kept in Australia.

Since he had no children, his title of nobility expired on his death.

The Banks Island in the Canadian Northwest Territories , the fifth largest island in Canada, was named in his honor. A New Zealand peninsula, the Banks Peninsula , as well as the district located on it were named after him. In the Botany district of Sydney, a park, a street and an industrial area are named after Banks.

The plant genus Banksia L.f. from the silver tree family (Proteaceae) has been named in his honor. In addition, the genera Bankesia Bruce from the rose family , Banksea J.König from the ginger family (Zingiberaceae), Josephia R.Br. were named in his honor. ex Knight from the silver tree family (Proteaceae), plus the fossil genera Banksicarpus Velen. & Viniklář , Banksieaephyllum Cookson & SLDuigan and Banksites Saporta .