The National Library of Australia (NLA) is the National Library of Australia . It is located in the capital Canberra , more precisely in the Parkes district on the south bank of Lake Burley Griffin . Under the National Library Act , she is responsible for "the maintenance and development of a national collection of library materials, including a comprehensive collection relating to Australia and the Australian people". At the end of the 2018/19 fiscal year, the NLA's collection comprised around 7.72 million media and an additional 17,950 running meters of manuscript material. In addition to the main building, there are also two warehouses in the Hume district. 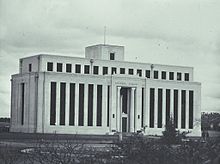 With the establishment of the Australian state in 1901, the Commonwealth Parliamentary Library was established, which served the newly established Australian federal parliament, but also the general public. From the beginning she strove to build a national collection. In 1907 the Joint Parliamentary Library Committee, chaired by Frederick Holder, defined the aim of the library as follows: “The library committee has the ideal of a large public library modeled after the time when parliament is to be established in the federal capital build the world famous Library of Congress in Washington ; such a library that is indeed said to be worthy of the Australian nation; the home of literature, not of a state or an epoch, but of the world and of all times. "

The Parliamentary Library was initially located in Melbourne , like Parliament itself , until both institutions moved in 1927. There the collection was spread across various buildings. In November 1934, construction began on a new central building on Kings Avenue. For financial reasons, the building designed by Edward Henderson in the strictly classical style remained unfinished. Only one of several planned wings could be realized. The National Library Act 1960 passed by Parliament created the legal basis for the separation of the functions of the Parliamentary and National Library, as well as securing the funding of the new institution, which was founded on March 23, 1961.

The current main building of the National Library of Australia at Parkes Place was then built in seven years of planning and construction. Designed by Walter Bunning in the so-called “contemporary classicism” style, it is based on the work of the American architect Edward Stone and the Parthenon . The eight-story building was supposed to have the same number of columns (17 × 8) as the Greek original, but the National Capital Development Commission cut a row of columns to save $ 250,000. Prime Minister Robert Menzies showed great interest in the library's development and funding. He was openly against the idea of ​​a modern building and advocated “something with pillars”. Bunnings neoclassical vision meant that traditional building materials were used. The exterior of the building is clad in light marble , plus granite , bronze , slate and copper . The walls of the podium are made of gray trachyte and the roof of copper. It was opened on August 15, 1968 by Prime Minister John Gorton . The Henderson building on Kings Aveneue was demolished that same year.

The library's Australiana collection has become the nation's premier resource for materials relating to Australian heritage. Australian writers, editors and illustrators are actively sought and well represented, whether their work has been published in Australia or abroad. The collection includes all formats of material: from books, magazines, websites and manuscripts to images, photographs, maps, music, oral history , manuscript papers and ephemera .

Around 94.1% of the library holdings are cataloged and can be found via the online catalog. By June 2019, the NLA had digitized over 5.5 million objects from its collection and, if possible, is presenting them directly on the Internet . The library is a world leader in electronic archiving . In addition, since 1996 it has maintained an online archive of selected Australian websites , the Pandora Archive .

The Australian Copyright Act 1968 requires that a deposit copy of every book published in Australia be deposited in the national library as well as in the central library of the respective Australian state. The library also issues ISSN and ISMN numbers and CIP recordings to Australian editors.

The library collects material produced by, for Australian, or through the Australian experience in all formats. This includes not only works such as books, series, newspapers, maps, posters, music, and printed ephemera, but also online publications and unpublished material such as manuscripts, pictures, and oral stories. A core collection of Australiana is that of John Alexander Ferguson . The NLA has particular collecting focuses in the performing arts , including dance. The library has a sizeable collection of general overseas works, rare antiquarian books, and premier Asian and Pacific collections that complement the Australiana collection. The print collections are also supported by extensive microform collections . In addition, the NLA maintains the National Braille Collection.

The library is home to the largest and most actively developing research resource on Asia in Australia and the largest collections in Asian languages ​​in the Southern Hemisphere , with over half a million volumes in the collection and extensive online and electronic resources. It collects resources about all Asian countries in Western languages ​​as well as resources in the following Asian languages: Burmese , Chinese , Persian , Malay , Japanese , Khmer , Korean , Lao , Manchu , Mongolian , Thai and Vietnamese as well as the languages ​​of East Timor . The library has also acquired a number of important Western and Asian linguistic collections from researchers and book collectors.

The National Library has an extensive collection of pictures and manuscripts. Although it mainly relates to Australia, there are also important stocks from Papua New Guinea , New Zealand and the Pacific . The collection also contains a number of European and Asian manuscript collections; individual pieces have been received by the educated as part of the book collections. The Australian manuscript collections date from the time of maritime exploration and settlement in the 18th century to the present day, with the focus starting in the 1890s. They include a large number of outstanding individual pieces such as the cartulary of Chertsey from the 14th century, the Journal of James Cook on HMS Endeavor , the diaries of Robert O'Hara Burke and William John Wills of the Burke and Willis expedition and the logbooks of Charles Kingsford Smith and Charles Ulm .

The National Library's collection of images focuses on Australian people, places and events, from European exploration of the South Pacific to contemporary events. Works of art and photographs are acquired primarily for their informational value and their importance as historical documents. The media represented in the collection include photographs, drawings, watercolors, oil paintings, lithographs, engravings, etchings, sculptures, and busts.

The NLA is a national leader in developing and managing shared online services with the Australian library community, making it easier for users to find and access information resources at the national level. The main building of the National Library houses various reading rooms and collections. The main reading room with most of the internet access terminals is located on the ground floor. Newspaper and family history services are also offered on the ground floor. The reading room on the first floor is responsible for special collections, and those on the third floor for Asian collections.

The National Library of Australia developed a library database aggregator called Trove under the motto Preserving access to digital information . This is a centralized national service that was built in partnership with major Australian libraries and went online in 2010. The most famous feature of Trove is the digitized collection of Australian newspapers. In 2019, over 26.5 million digitized pages were already accessible via Trove. Many of the NLA's search services have been fully integrated into Trove, which means that some are only accessible through this website. Others like the Pandora Archive and the Australian National Bibliographic Databas use Trove as their primary vehicle for public access. The service is able to find resources about Australia and Australians even in places that are otherwise inaccessible to external search engines. 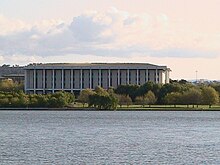 The National Library of Lake Burley Griffin as seen from