The Vietnamese language (Vietnamese, Annamite tiếng Việt , Hán Nôm 㗂 越 ; tiếng Việt Nam , 㗂 越南 ; or Việt ngữ , 越 語 ) is the official language in Vietnam . It is spoken as their mother tongue by around 84 million people , around 80 million of them in Vietnam (88% of the population) and an estimated up to 4 million Vietnamese abroad.

Although Vietnamese is not related to Chinese , the vast majority (around 70%) of its vocabulary consists of words of Chinese origin; In the basic vocabulary , however, their share is significantly smaller, and grammatical functional words are exclusively of native origin. A distinction must be made between the Sino-Vietnamese and the Vietnamese words. The latter are perceived as indigenous, although they are actually of Chinese origin.

Vietnamese is a tonal and monosyllabic language (the smallest unit of meaning consists of only one syllable ). Due to the decades-long Vietnam War and the subsequent isolation of the country into the 1980s, Vietnamese is one of the linguistically less researched languages.

The genetic classification of the Vietnamese language is controversial, it belongs to the Mon-Khmer languages within the Austro-Asian language family . This goes to the linguists Jean Przyluski and A.-G. Haudricourt , who compared Vietnamese with the Mường language (㗂 ?), which is not a tonal language, but is still demonstrably closely related to Vietnamese.

In a well-received article in 1954, Haudricourt explained the tonogenesis of the Vietnamese language, namely that it was originally not a tonal language and that the six tones only emerged later. Only then could the classification as a Mon-Khmer language prevail, because previously the presence of tones in Vietnamese and their lack in other Mon-Khmer languages ​​had been regarded as an obstacle to a combination.

This predecessor language may have been at home in the region around the Red River in what is now North Vietnam and only came to what is now Central Vietnam with the slow expansion of Vietnamese influence southwards, and much later to what is now South Vietnam.

At the same time as this expansion, there was a political dominance of China over Vietnam, which was to last 1000 years. The Chinese made the Chinese language the literary and official language; it thus became the language of the country's ruling class. By the 10th century, a type of Sino-Vietnamese had developed that contained a large number of Chinese vocabulary and was also written with Chinese characters. Numerous words have been adopted into the Vietnamese language, especially from the socio-political and cultural areas.

After the end of Chinese rule over Vietnam, the Vietnamese slang became more important again. This language was also written with Chinese characters, which the Vietnamese scholars gradually adapted to their needs; the result was chữ Nôm (? 喃). This old Vietnamese script reached its heyday in the 16th century; some writers still write important works in chữ Nôm today .

In the 17th century, missionaries from Europe developed a Romanization of the Vietnamese language. At the same time, European languages, especially French , began to influence the Vietnamese language. As a result, the Central Vietnamese language slowly developed. After Vietnam became a French colony in the late 19th century, the French language also became the official and educational language. Many words from French came into the Vietnamese language as loan words, and a significant number of Sino-Vietnamese words took on new meanings inspired by Western thought. The Chinese script remained in use, but the Romanized script continued to spread in the 19th century. In 1910, the French colonial administration officially introduced the Latin script. After Vietnam gained independence in 1945, it became mandatory and enabled large sections of the population to become literate more quickly.

A genetic and linguistic analysis in 2015 revealed a probable origin of the Austro-Asian languages and thus also of Vietnamese in central China , more precisely along the Yangtze River .

Vietnamese is the only official language in Vietnam . In Vietnam it is spoken by the entire population ; the country's ethnic minorities , who make up around 8% of the total population (including Chinese , Thais and Cambodians as well as numerous hill tribes), speak the language either as their mother tongue or as a second language.

In addition, with the emigration of millions of Vietnamese people, the language has spread around the world. Vietnamese is spoken of "overseas Vietnamese" in the USA , Australia , Canada and France . In Germany there are about 100,000 native speakers in France about 200,000, in Poland there are about 5000th

In parts of Cambodia, Laos, and southern China, Vietnamese is one of the dominant languages.

The main differences are in the pronunciation of the tones - the northern dialects tend to distinguish the tones more than the southern dialects; this applies particularly to the hỏi (?) tone and the ngã (我) tone.

The majority of Vietnamese songs are played in the North Vietnamese dialect.

The spelling is also based on the dialect of the capital Hanoi, which is in the north.

This section describes the pronunciation of Vietnamese in the north of the country or in Hanoi.

Structure of syllables and rhymes in Vietnamese

There are 22 consonants - phonemes in Hanoi pronunciation :

Consonants in German and Vietnamese

There is considerable disagreement among linguists about the vocal system of Vietnamese. The simple vowels can also be interpreted as diphthongs and there are different views on the characteristics of length and quality.

The following table shows the spelling of Vietnamese diphthongs: 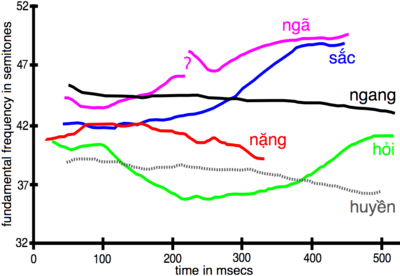 Tone duration and course of the 6 North Vietnamese tones
spoken by a male speaker (not from Hanoi), basic frequency over time. from Nguyễn & Edmondson (1998)

The 6 tones of the Vietnamese language

The height and the course of the pitch when pronouncing a syllable are meaningful. This means that a wrong pronunciation of the tone has a distorting effect. Without the sounds, the Vietnamese language would have an extremely high number of homonyms . The sounds of Vietnamese differ in pitch and course, length and glottalization. In the Vietnamese script, the tones are identified by diacritical marks .

As Haudricourt (1954) recognized, Vietnamese in an older form had no tones. The six tones were probably created during the first millennium under the influence of Chinese as a contact language, depending on whether the syllable was originally voiced or voiced, and whether the syllable originally ended in vowel, -h or -ʔ (glottal stop).

Vietnamese is an isolating language . The words are not inflected , the relationship of a word in a sentence to other words becomes clear only through their position in the sentence. Therefore, the sentence construction subject - predicate - object is generally adhered to. Exceptions, such as bringing the object to the beginning of the sentence for emphasis, are possible.

Since there are no grammatical tenses , the tense is only visible from the context; That is, it emerges from the context or is determined in more detail by other words (e.g. adverbs ).

The occurrence of unit words in the Vietnamese language is significant . As in other Asian languages, it is not possible to connect the numerals and nouns directly, but rather a unit word must be placed in between. These differ according to whether the noun is animate or not, with inanimate nouns properties such as the form are decisive.

Similar to Romance languages , the attribute always comes after the word that describes it in more detail, such as tiếng Việt (" Sprach -Viet" = Vietnamese language, so it can be found in the Wikipedia language bar under T).

Vietnamese is a language in which each word originally consisted of just a single syllable . To this day, the basic vocabulary and all grammatically significant words are monosyllabic. However, throughout history, numerous two-syllable words have entered the language vocabulary. In the case of words with multiple syllables, however, the individual syllables are not written together.

Furthermore, polysyllabic loanwords from Chinese have been incorporated into the Vietnamese language. If they have two syllables, they can be easily recognized by the fact that what is descriptive does not come after what is described, but in front of it. The pronunciation is not similar to standard Chinese , but rather southern Chinese dialects (such as Teochew (Min dialect), Cantonese ). Examples are đại học (大學, high Chinese dàxué , Cantonese daai6 hok6 , Teochew dai6 hag8 , IPA : tai hak ; literally "great teaching", a chapter of the book of rites ; modern meaning: "university") or ngữ pháp (語法, Standard Chinese yǔfǎ , Cantonese jyu5 faat3 , Teochew ghe2 huab4 , IPA : gə huap ; literally "language-law", i.e. "grammar"). There are a large number of synonym pairs , with one word composed of Vietnamese components, while there is a word of Chinese origin with the same meaning. Most of the time, both versions are borrowed from Chinese, with the version perceived as native having undergone a process sometimes referred to as Vietnamization. Obvious examples are năm and niên for year, both of which come from Chinese 年.

Due to the decades of French colonial rule, there are a number of French words in Vietnamese that mainly reflect technical expressions or describe things of everyday life that were introduced into the country by the French. These include ga (from gare , “station”), xi-măng (from ciment , “cement”), bia (啤) (from bière , “beer”), pho mat (from fromage , “cheese”) or bánh (餅) (from pain , “bread”, 餅 bánh, biscuit, borrowed from Chinese, is however identical).

The Vietnamese language was written in three writing systems:

Probably at the time when the Sino-Vietnamese pronunciation was established, i.e. from the 11th century at the earliest, but certainly from the 13th century, Vietnamese scholars began to change the Chinese script.

This began with the standardization of the spelling of Vietnamese words, such as proper names. Later, special characters were introduced to better express words that were common in Vietnamese. A separate Vietnamese script was created, the Chữ Nôm . Since the characters were not determined according to the origin of the word, as this was unknown to the various authors who developed Chữ Nôm, the writing ultimately became illegible for the Chinese. The oldest inscriptions of these Chữ-Nôm signs can be found on bells in temples and in stone inscriptions. Kim Vân Kiều (金 雲 翹) is the most important literary work written in Chữ Nôm. This epic by the writer Nguyễn Du (阮 攸) is still one of the classics of Vietnamese literature and is standard reading material in Vietnamese schools.

From the 16th century the missionary work of Catholic priests from Europe (especially Portugal , Italy , Spain and France ) began. They needed a transcription of the Vietnamese pronunciation into Latin letters in order to learn the language of those they wanted to convince of Christianity. At the same time, they hoped that learning the Latin alphabet would make learning the respective European language easier. The script they developed is called Chữ Quốc Ngữ (script of the national language). The pioneers in developing this font were Christofora Borri , Francisco de Pina and Francisco de Buzomi . The missionaries Gaspar d'Amaral , Antoine de Barbosa and Alexandre de Rhodes subsequently created dictionaries of the Vietnamese language independently of one another. In 1651 the Dictionarium Annamiticum Lusitinum et Latinum was released for printing by Alexandre de Rhodes in Rome.

Chữ quốc ngữ (? 國語) developed through several modernizations and standardizations of spellings to a Latin script with two additional letters for vowels that do not exist in Western languages. In addition, the six tones are represented by diacritics . Chữ quốc ngữ has been the official state and traffic script of Vietnam since 1945.

It is a phonetic script , which means that the pronunciation can be derived very precisely from the spelling.

The tones are denoted by diacritics (see above). Since there are vowels that naturally have a diacritical mark, vowels with two diacritics are not uncommon.

Not every syllable exists in every pitch; some syllables only make sense in one or two of the six possible tones.

Vietnamese in HTML and Unicode

Example (Article 1 of the Universal Declaration of Human Rights )