Proteaceae are mostly evergreen woody plants: trees or shrubs or half-shrubs , rarely herbaceous plants . Especially in the morphology of the leaves one can recognize in some species that it is a family with relatively original characteristics, the leaves often have forked veins ( dichotomous ). The leaves have a variety of shapes: from undivided to finely slit there are all possibilities. Sometimes they are needle-like and pointed and some leaf shapes are more reminiscent of ferns than of seed plants. Stipules are missing.

The small individual flowers are usually grouped together in extensive and conspicuous inflorescences . The flowers are hermaphroditic or functionally male or female. They are seldom monoecious ( monoecious ) or dioecious ( dioecious ) of separate sexes. The relatively simple flowers are radially symmetrical to zygomorphic and usually four-fold. The bloom is structured very differently - divided into sepals and petals or just a circle of bloom. There is only one circle with mostly four (rarely three) stamens , which are widely fused with the bloom. Each flower contains only one upper carpel ; it contains one to numerous ovules . Between the bracts and ovary there is a four-scales or ring-shaped gland for the production of nectar (the so-called discus). In many species there is a secondary pollen presentation . Here the pollen is deposited on the “pollen presenter” (protostigma), which is located on the stylus , and then presented to the pollinators before the anthesis . This means that many species are protandric .

There are follicles , stone fruits or achenes formed. 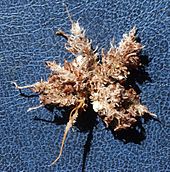 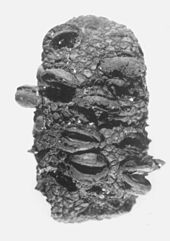 Many representatives of the silver tree family have developed a strategy to extract the few nutrients and minerals from the soil with high efficiency. Especially the species that grow in nutrient-poor soils form very numerous so-called “ proteoid roots ” after rainfall . These are short-lived, short roots in dense clusters. They grow mainly just below the surface and are particularly capable of absorbing the nutrients and minerals washed into the soil by the rain.

Very common in Proteaceae are species that only release their seeds after a fire, these species are strongly adapted to forest fires, the phenomenon is called fire trees or pyrophytes . Examples are the Sil areas ( Grevillea ) and the Banksien ( Banksia ). The advantage for the plants is that after a fire the location is almost free of vegetation and the soil has been well fertilized by the ash.

The seeds survive the fire either:

Some species from areas without regular bush fires release their seeds shortly after maturity without any external influence.

The pollination is often done by birds , but also insects , marsupials and rodents .

The ancestors of the Proteaceae family emerged before the great continent of Gondwana broke up about 150 million years ago. The current Proteaceae area is disjoint and corresponds mainly to the parts of Gondwana. The distribution area of ​​this family extends to South America , middle to southern Africa , southern China to Australia , Japan , southern India . Many of the genera and species from the Proteae tribe belong to the South African Cape flora . 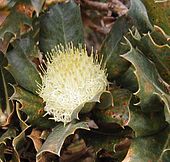 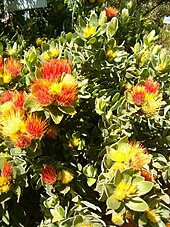 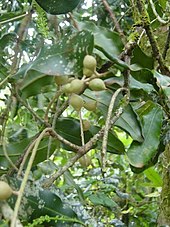 Inflorescences and leaves of the common pinwheel tree ( Stenocarpus sinuatus ). 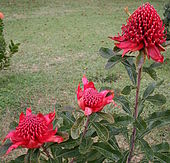 The type genus is Protea , which is named after Proteus , the Greek god of the sea. Proteus is known for its art of continuous change of shape. The individual taxa of the Proteaceae are also very different in their shape, habit and especially leaves .

The Proteaceae family is divided into five subfamilies , which in turn are subdivided into tribe and often also subtribe. The family includes around 77 genera with around 1600 species . Here the subfamilies with their tribe, subtribe and genera according to Peter H. Weston & Nigel P. Barker 2006:

Subfamily Proteoideae Eaton : In this subfamily there are 26 genera with 640 species, with a distribution in Africa south of the Sahara (especially in the Cape flora) and Australia :

The following are not classified in a tribe:

Tribus Conospermae Endl. : It occurs only in Australia including Tasmania.

Tribe Proteae Dum. : It contains two genera only in Africa including Madagascar:

Subfamily Grevilleoideae Engl .: In this subfamily there are 45 genera with 855 species:

The following are not classified in a tribe:

Tribus Macadamieae C. Venkata Rao : It contains only three genera with around 35 species:

Subfamily Bellendenoideae PHWeston : This subfamily is monotypical , so contains only one genus and one species:

Subfamily Persoonideae LASJohnson & BGBriggs : In this subfamily there are five genera with 110 species; their home is mainly Australia , but also New Caledonia and New Zealand :