The Commelina plants (Commelinaceae) are a family in the order of the Commelina-like (Commelinales) within the flowering plants (Magnoliopsida). They are mainly found in the subtropics and tropics . Some species are neophytes in many areas of the world . Many taxa in this family are used as ornamental plants , especially known as houseplants in temperate latitudes .

They are rarely annual (for example all Tinantia species) or mostly evergreen, perennial herbaceous to succulent plants that sometimes become lignified at the base. Species in arid areas form rhizomes or tubers as persistence organs. They grow independently upright, creeping, hanging or climbing (for example Palisota thollonii ) and a few species as epiphytes (for example both Cochliostema species and Belosynapsis vivipara ). The young stems often break easily at the most thickened nodes ( Nodien ). 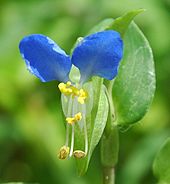 The arranged and alternate spiral or two lines distributed in a basal rosette or the stem leaves are pedunculated or sessile and have a sheath. Often the leaf sheath partially envelops the stem until their ends touch. The leaves are often more or less fleshy or herbaceous. The simple leaf blade is parallelnervig and entire. Around the stoma there are usually four or six, rarely two, side cells arranged very characteristically.

The flowers are seldom single, but mostly in large numbers in unbranched or branched inflorescences , which are composed of cymes . Sometimes large bracts are present.

The mostly hermaphrodite, rarely unisexual flowers are threefold and radial symmetry to strongly zygomorphic . There are some monoecious ( monoecious ) and dioecious ( dioecious ) separate-sex species. The two circles, each with three non-identical bracts, are divided into sepals and petals. The three sepals are usually free or rarely fused at their base. The mostly three, sometimes nailed, petals are often free or sometimes fused with tubes in the central area. Sometimes a petal is colored differently or more or less strongly reduced until only two petals are visible. The petals can be white, blue to purple or rarely yellow (but in all Cartonematoideae). There are two circles with three free stamens each. Either all stamens are fertile or only two to three or rarely only one, then staminodes are present. The stamens are bald or often have conspicuous hairs. The anthers usually open with a longitudinal slit and sometimes have appendages. The mostly sulcate, two-celled pollen grains usually have an aperture or less often two to four. The three carpels are a top permanent ovary fused with one to several to many ascending (1 to 50) ovules per ovary chamber. The simple stylus ends in a small or enlarged scar.

The pollination occurs autogamically or entomophilous . No nectar is produced, but many species have a very special attraction mechanism: Two different types of stamens are formed. In addition to the fertile stamens, there are light yellow, so-called "fodder stamens", which attract the pollinators by producing small pollen that these insects eat as food serve. In some species, special hairs are also formed on the stamens that serve as food for the pollinators.

Usually two- to three-fold, mostly dry, loculicidal capsule fruits are formed; rarely they are fleshy and berry-like ( Pollia ). Sometimes berries ( palisota ) are formed. The fruits contain few seeds. The large seeds are starchy and have a chlorophyll-free embryo .

It is usually one cotyledon , but sometimes there are two. A hypocotyl internode is often present, sometimes long, or absent, for example in cyanotis .

The basic chromosome numbers are different: usually x = 6 to 16, but x = 4 to 29 are possible. Depending on the taxon, ingredients can include, for example, cyanidin , pro- anthocyanidins , alkaloids and, in the case of Cyanotis, saponins .

Tribus Tradescantieae Subtribus Cyanotinae: Cyanotis somalensis is a semi-succulent species from East Africa and can be recognized by its small, longitudinally folded, hairy leaves 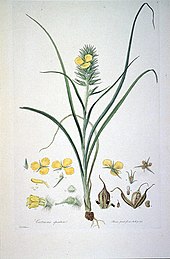 The Commelinaceae family is divided into two subfamilies , each with two tribes and contains around 40 genera with around 652 species (as of July 2009):

The Commelinaceae family is monophyletic according to a lot of molecular genetic data . According to Evans et al. 2003 and Burns et al. 2011 results in the following cladogram :

Many species of the Commelinaceae family are used as ornamental plants in tropical to subtropical parks and gardens. In the temperate latitudes, some species and their varieties are especially used as indoor plants .