The screw tree plants (Pandanaceae), also seldom referred to as pseudo palm plants or piston palm plants , are a family in the order of the screw tree-like (Pandanales) within the monocotyledons . This small family contains only four genera with around 800 to 885 species. Of some species, the leaves are processed, and some species are ornamental plants for parks and gardens, and of one species, varieties are used as house plants.

The species of the family are evergreen , woody plants that grow tree-shaped, shrub-shaped or as lianas ; some types are epiphytes . There is no secondary growth in thickness and therefore one does not speak of trees. In many species aerial or stilt roots are formed. Some species are helophytes and thrive in shallow salt water. If stems are present then they are usually single or sometimes bifurcated. The shoot axes are often curled by the ring-shaped leaf scars.

The alternate and seemingly schraubig (hence the German name), but in fact rarely two, usually three or four lines rarely arranged leaves are sessile and simple. There are open leaf sheaths. The hairless, sometimes floured, leathery leaf blade is linear to lanceolate, often very long and sometimes keeled on the underside and often ends in a spiked tip. Often the leaf blade is serrated on the edge and often also on the midrib; the leaf margin can also be whole. There is parallel vein , but there are also many horizontal secondary leaf veins . Tetracytic stomata are present.

The flowers are mostly unisexual, but hermaphroditic flowers are also found in some species. In many taxa no bracts are recognizable, so they are rudimentary . There are 10 to 100 stamens in male flowers . The smooth ( Pandanus ) or papillary ( Freycinetia ) stamens are free or grown together in groups, often with "stemonophores". The basifixen dust bag consist of two counters with two pollen sacs . The two-celled pollen grains are furrowed or bumpy with an aperture and the pollen surface is often prickly. There are 1 to 80 free to fused carpels and sometimes staminodes in female flowers . Each upper carpel contains one to several anatropic ovules in basal or parietal placentation. There is at most a short stylus.

When fruits are drupes ( Pandanus ) or berries ( Freycinetia ) formed. In some species the fruits are grouped together to form collective fruits, which are very differently structured, depending on the species. The fruits contain one to many tiny seeds. The endosperm can be starchy ( Freycinetia ) or oily ( Pandanus ) and fleshy. The basal embryo is tiny.

There is strength formed (only from Pteridophytentyp). Calcium oxalate crystals are stored as raphides. 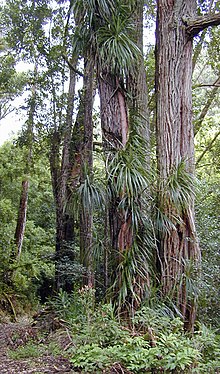 Pandanus heterocarpus on the island of Rodrigues near Mauritius

The species of the family of the Freycinetiaceae Le Maout & Decaisne are assigned to the screw tree plants (Pandanaceae) today.

The family originated in the early to mid- Cretaceous period about 96 million years ago on the Gondwana continent when it broke up. There was a rapid adaptive radiation and this explains the current distribution of the genera. However, some species in Madagascar got there much later through long-distance distribution.

They have a distribution from the tropics to the warm temperate latitudes of the Old World . Their natural distribution areas are in tropical Central and West Africa , in Madagascar and nearby islands, from India to Thailand to China and from the Malay Archipelago to Australia to New Zealand and the Pacific Islands.

The family comprises only four genera with around 900 species:

Some species of the screw tree family are used economically, for example Pandanus utilis, which is native to Madagascar . Flour is made from its fruits, and it is grown for fiber in the West Indies and Central America . An extract for perfume production is obtained from the Pandanus odorifer , which occurs in South Asia, Polynesia and Australia .

The bracts are used by some Freycinetia species and the fiber-rich leaves are used for weaving mats and baskets, binding material or for roofing.

Some species are also used as ornamental plants, in parks and gardens in the tropics and subtropics, as robust houseplants in frosty areas ( Pandanus veitchii, especially its variegated variety).