Segmentation of the earth's surface in 1: 1,000,000 map sheets and the coding for the Soviet General Staff map 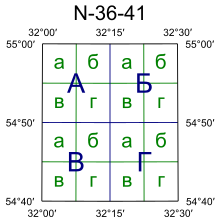 Competencies for creation and distribution

The maps of the General Staff of the Armed Forces of the USSR (Maps of the Soviet General Staff), also General Staff Map, were produced under the auspices of the Central Administration for Geodesy and Cartography at the Council of Ministers of the USSR (ru Ministrow SSSR]) published. This authority planned, organized and directed the topographical-geodetic security within the Soviet Union. This included the creation / updating, production and (for the civilian sector) the provision, distribution and return (sales) of all topographical and geodetic documents and devices.

The Administration of Military Topography (ru. Военно-топографическое управление [Voenno-topografitscheskoje uprawljenije]) in the General Staff of the Armed Forces of the USSR was responsible for topographical and geodetic security within the armed forces. This type of safeguarding of combat operations includes in particular the specific supply (provision, distribution / supply, return) with topographical documents (map material, etc.).

In addition, the Ministry of Defense of the USSR coordinated the creation of the global map series ( world map 1: 2,500,000 ; ru. Карта мира [Karta Mira]) through the special military geography department in the General Staff . To this end, the General Staff and the Staff of the United Armed Forces organized cooperation with the specialist departments at the alliance partners of the Warsaw Treaty Organization (WVO) and with friendly states.

The military cartographic service of the GDR (MKD, Halle / Saale location), for example, also produced topographical documents in Russian, Polish and Czech as part of its supply contract.

From 1976 a world map 1: 2,500,000 was available for military-geographic work, which had been drawn up jointly by seven participating states of the Warsaw Treaty (Bulgaria, GDR, ČSSR, Poland, Romania, Hungary, USSR). The GDR took over the processing of rooms in North, West and Southwest Europe as well as on the South American continent. The publication of the second edition could no longer be completed in 1990/91.

Since during the "Cold War" the military geographic and topographic documents, the entire surveying and mapping system and especially the thematic special maps were subject to very strict secrecy (as classified information ), little is known about the products of the (military) topographic service and the marine hydrographic service known in public and abroad.

The Federal Ministry of Defense (Vienna, 2006) describes and assesses the development of military geography, military topography and sea hydrography using the example of the former USSR alliance partner, the German Democratic Republic (GDR), in a monograph. Using comprehensive documentation, it primarily evaluates the work and achievements of the Military Topographical Service (MTD) of the National People's Army (NVA) and the Sea Hydrographic Service (SHD) of the GDR and provides more detailed explanations using numerous map examples. The evaluation judgment is that in the armies of the participating states of the Warsaw Treaty technically excellent topographical and thematic maps have been developed, which are particularly impressive due to their usability for troops, uniformity of representation and the extent of the processing.

After the collapse of the Soviet Union , the topographic maps are also available to civilians. For numerous remote and sparsely populated regions of the world, the map is the best, and in some cases the only topographic map material that is currently available. 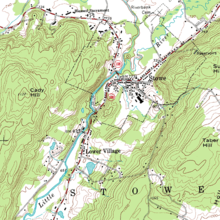 The topography of the landscape is shown in great detail on the maps . In the larger scales, even the smallest settlements are included and also labeled. The cards are labeled in Cyrillic or, for special purposes, in several language versions (e.g. in German and Russian). All maps are provided with contour lines .

The maps contain information on the geographical coordinates and the Gauß-Krüger coordinates on the edge of the sheet . All maps are based on the geodetic date " Pulkowo 1942" and the Krassowski ellipsoid .

In total, the series of scales consists of nine scales. However, there are differences in the sheet cut in the scale series 1: 200,000. The scale 1: 75,000 was only used in Latvia for historical reasons .