Helmut Horten (January 8, 1909 in Bonn - November 30, 1987 in Croglio , Switzerland) came from the Horten merchant family . He began a commercial apprenticeship in the Leonhard Tietz department store and then moved to the Alsberg department store in Duisburg as an employee.

After the National Socialists came to power, the NSDAP organized the boycott of the Jews , and in the process of Aryanization (also known as de-Jewification ) it was made difficult or even impossible for Jews to continue their operations through loan cancellations and other measures. Many Jewish business people therefore wanted to emigrate and sold their harassed businesses at low prices.

In 1936 the head of Commerzbank's Duisburg branch, Wilhelm Reinold , approached the then 27-year-old Helmut Horten with other donors, and together with him they founded Helmut Horten KG as the only personally liable partner . This was initially taken over by the Alsberg brothers' department store in Duisburg from the Jewish owners Strauss and Lauter, who were forced to emigrate. The Jewish employees were fired and the department store advertised that it was now in Aryan ownership . In Wattenscheid the department store of the Jewish businessman Sally Hess was taken over in the same year. In the course of the Aryanization and the expropriation of Jewish owners, the Horten KG expanded further and six branches were taken over by 1939.

After the occupation of the Netherlands, the company acquired one of the largest department stores in the Netherlands, Gebr. Gerzon Modemagazijnen, for $ 100,000 (about 10% of the actual value) plus an exit visa from the Jewish Gerzon family .

At the end of the war, the department stores either came under Russian influence or were destroyed by the bombing except for the house in Wattenscheid.

In 1954, what was then Helmut Horten GmbH took over Emil Köster AG. This increased the number of branches by 19 department stores of the Köster and DeFaKa brands . The Köster brand disappeared as early as 1965 when a new hoarding building replaced the Wiesbaden branch. The DeFaKa locations were converted piece by piece into full-range department stores or replaced by new buildings until the 1970s. The DeFaKa branches were described by hoarding as "department stores of classic character" and had their focus on textile goods. Although the approaching end for the DeFaKa brand was announced in 1967, investments were still made in the stores and, for example, a department of “the men's outfitter” was set up in the Kiel branch.

In the 1960s, the requirements for the Horten “full-range department stores of the most modern type” were set up at Helmut Horten GmbH. In addition to escalators, self-service supermarkets, the “Miss H.” fashion boutique, the men's department “the men's outfitter” and catering by the “copper pike” restaurants were to be set up in these branches. Modern department stores should, if possible, also include their own parking garages and gas stations. By 1967 three petrol stations had already been opened (Duisburg-Hamborn, Neuss, Nuremberg). In addition, almost all of the houses should be immediately recognizable as hoarding thanks to the uniform honeycomb facade. The second brands Merkur and DeFaKa should therefore be dropped in the coming modernization phase.

In the post-war period, numerous new department stores were fitted with the ornamental aluminum tile façade designed by the architect Egon Eiermann (ceramics were also attached to some branches). These " hydrangea tiles " are still visible today on many department store facades and are partially listed.

After the Second World War, the Horten AG operated its branches under different names, so the newly established branch in Neuss was initially called " Merkur ", although the house had already received the hydrangea tiles. Other branches, for example in Essen, were called DeFaKa (German family department store) until the new building in the 1970s . The name "Merkur" later had a purely internal meaning for Horten when a purchasing company was founded together with Kaufring in order to be able to order larger quantities on the market at better conditions. After the purchase by Kaufhof, this community became unnecessary, and Horten sold the 50% in "Merkur Purchasing Company Horten-Kaufring mbH" together with a 25% share package in the Kaufring von Horten to the German company Woolworth.

1974 Horten AG bought the hypermarkets of the Otto Group . Horten turned almost all hypermarkets into normal department stores with the name Horten. The one-storey house in Hamburg-Eidelstedt was named Hanse SB-Warenhaus, with the letters resembling the Horten lettering. Since Otto had only built up his department store line in 1970, the locations were accordingly not the best (except for Hamburg-Poppenbüttel). By the end of the 1980s, almost all the branches taken over had been closed. In 1982 the Recklinghausen branch was converted into self-service. The name Hanse SB was also used here.

Also with Kaufring and Hertie , Horten AG founded the purchasing company "Sono-Centra" in 1990 with the aim of being able to order larger quantities in Asia at more favorable conditions. Each of the three partners held a third of the shares in this company.

Appearance of the hoarding department stores

From the outside, the department stores could be recognized by the characteristic hydrangea tiles . The lettering "Horten" was affixed to the building in a dark blue.

Inside the hoarding department stores, brown walls with dark wooden floors or carpets prevailed until they were converted into Galeria branches. Larger branches were so-called "full-range suppliers", which means that there were all the usual goods (such as toys, car accessories, sporting goods etc.). Many department stores had a grocery store and a restaurant called "bon appetit". Over time, some department stores also got their own hoarding travel agency.

The separation of Helmut Hortens from his department store chain

With the sale of its Horten shares, Horten started a debate about tax evasion in Germany . Helmut Horten moved to Switzerland with his wife Heidi in 1968 and in the same year converted the company from a GmbH to an AG. In the following years he gradually sold all of his shares for 1.13 billion Deutschmarks . According to Swiss law, there was no tax on this and in Germany hoarding was no longer subject to tax, which in 1972 led to the reorganization of German foreign tax law . Therefore, the foreign tax law (or in particular the exit taxation of § 6 AStG) is still referred to as " lex hoarding".

After Helmut Horten's death in 1987, his wife Heidi inherited his fortune.

After the shares were sold, the majority of Horten AG initially came into British hands, and from the late 1980s onwards, WestLB held the majority of the shares. In the early 1990s, two large trading companies wanted to take over Horten. On the one hand, the Kaufring , which at that time did not yet operate its own department stores, but was very interested in entering the stationary market with its own branches, and on the other, Kaufhof . In 1992, Kaufring then took a 5% stake in Horten via West LB, but Kaufhof also increased its shares bit by bit. Eventually, Horten was taken over by Kaufhof; The takeover was completed in 1994. Before that, however, Kaufring had secured ten smaller department stores (1993). At that time, Kaufhof was part of the Metro group.

The development of the “Galeria concept” by Horten AG six years before the takeover by Kaufhof paved the way for today's Kaufhof Group. For the first time in 1988 a Galeria Horten was opened in Münster and in the same year in Heidelberg. The branches have been extensively redesigned. Wide corridors, small signs on the main corridors to mark the departments, were features of the converted branches; in addition, the dreary brown disappeared from the walls and ceilings. Some houses also received a large window element that broke up the monotonous structure of the hydrangea tiles. Even the “bon appetit” restaurants were initially given a design approximating in style; with different expenses for the food, depending on the preparation method. However, only houses over 7000 m² should be included in the Galeria concept; it could therefore not have been used for all branches. The converted houses were able to record significant increases in profit, so that soon more and more branches were allowed to decorate themselves with the addition. Some smaller branches have therefore already been outsourced to Horten; they went under the name Horten-extra. This measure is comparable to the founding of Karstadt-Kompakt, if not as far-reaching. Ten of the small branches were transferred to Kaufring AG before the final takeover by Kaufhof AG in 1993, which they converted into likewise unprofitable “ J.Gg. Rupprecht ”department stores.

Internationalization of the Galeria concept

The Galeria concept developed by Horten AG can now also be found abroad. The Belgian Kaufhof subsidiary “ INNO ” has been operating all branches since 2004 as “Galeria Inno”. As with Horten, the original Inno logo was only supplemented by the Galeria sheet and the lettering in the first version (like the Galeria Horten logo, only with Inno instead of Horten). In addition, the company color changed from blue / red to dark green / green. In Poland there were also Galeria department stores called “Galeria Centrum” there (e.g. in the Ściana Wschodnia in Warsaw), but these had nothing to do with the Galeria concept of hoarding.

Separation of the department store business from Horten AG

On January 1, 1995, the Horten department store business was transferred from Horten AG to Horten Galeria GmbH, based in Cologne. After that, however, Horten AG initially remained as a real estate company; continue to have its headquarters in Düsseldorf. Horten Galeria GmbH was later merged with Kaufhof Warenhaus AG, and Horten AG disappeared in 1998, initially in Divaco AG & Co. KG , in which Metro AG amalgamated several companies that were no longer part of the core business. Ultimately, the Horten AG disappeared from the scene a little later. 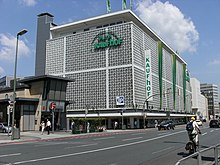 The end of the Horten department store brand

At around the same time as the 125th anniversary of Kaufhof Warenhaus AG, the Horten department store brand came to an end. After the takeover of the majority of shares in Horten AG, the Horten branches that remained in the new Kaufhof Group were either renamed (Galeria) Kaufhof or otherwise, sold or closed. Today only the Carsch-Haus in Düsseldorf bears the Horten logo above its entrances, carved in stone, without any color highlighting. The last normal hoarding department stores until 2004 included Erlangen, Nuremberg, Krefeld and Ludwigshafen. The last Galeria Horten was in Gießen until October 2003.

Development of the "Horten" trademark 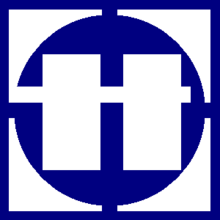 Hoarding "H" logo. From the mid-1960s a. a. To be found on all flags, also on supermarket shopping carts and on the uniforms of the saleswomen called “after-school care”. In the early 1980s it was replaced by the hoarding honeycomb as a logo

Slim prototype logo from the early 1960s. Use of the Wuppertal branch from 1963 (the logo was no longer used afterwards)

The logo was supplemented by an advertising text (slogan)