The title of this article is ambiguous. Further meanings are listed under Billa (disambiguation) .

Former logo of Billa until 2019 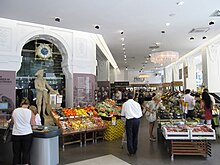 Billa (proper spelling in capital letters) is an Austrian company of food retailers with headquarters in Wiener Neudorf . It was founded in 1953 by Karl Wlaschek and developed into the market leader in the following decades. In 1996, Billa was taken over by the Rewe Group together with its sister company Merkur and continued as a division of Rewe International.

In December 1953, Karl Wlaschek opened in Vienna's Margareten a discount - Perfumery . More locations were gradually added, and by 1960 Wlaschek's company already had 45 branches. The range was expanded to include groceries and in 1961 Billa (for “cheaper shop”) was introduced as a name. The self-service concept proved to be successful, and Billa developed into a rapidly growing company. Wlaschek had taken on many tasks himself, from purchasing to collecting the income, and from 1967 he built up a management team. A year later, the first branch with over 1,000 square meters of retail space was opened. She owned a fresh meat, fruit and vegetable service, which was an innovation in the industry.

In 1969 the Merkur retail chain joined the company. The first branch was established in a former Billa branch. With Merkur, Wlaschek was able to diversify his business decisively and thereby set himself apart from the competition. When in 1978 the Buchhandelsgesellschaft Libro began operations, which was firm BML as a holding company established for Billa, Merkur and Libro. While sales in the early 1970s were one billion schillings , the company had sales of seven billion schillings in the early 1980s. Later three more retail chains were added: Bipa (for “cheap perfumeries”), Mondo and Emma. As a result of further growth, the Billa Group had more branches than Julius Meinl for the first time in 1985 . In 1990 the company rose to become the market leader in retail in Austria.

After the fall of the Iron Curtain, Billa expanded to Poland, later Italy, Hungary, Slovakia and the Czech Republic followed. In 1991, O'Lacys was the first brand to be introduced, and in 1994 the organic line “ Yes! Of course ”. In the following year, 200 consumer branches were added to Billa, as a result of which the retail chain grew to 18,000 employees, 1,500 branches and a turnover of 45 billion schillings. After there was initially speculation about an IPO of the entire group, the sale to the German Rewe Group was announced in 1996. Only the subsidiaries Libro and Billareal were excluded from this. With the sale of Billa, Wlaschek wanted to secure his life's work. The Rewe Group is thereby positioning itself more internationally. Also in 1996, the company became the first retailer in Austria to stop selling poultry products made from battery packs .

In the following years the company continued its expansion, both in Austria and in Eastern Europe. With the founding of ITS Billa Reisen, the company entered tourism in 1998 . At the same time, they experimented with sending goods by post, and in 1999 the first online shop was launched. In stationary retail, Billa expanded the use of ATM cash registers and increasingly focused on sustainable and GMO-free products. At the end of the 1990s, Billa was one of the most important retail chains in Austria alongside Spar . The growing market power also provoked protests, for example in the course of the acquisition of the grocery store from Julius Meinl in 1998.

Billa expanded its offering towards service companies in the 2000s and 2010s. For example, Billa announced that it would also sell electricity and set up a way to send DHL parcels. In addition, they wanted to support customers in banking. In addition, the design of the branches has been comprehensively modernized and the technology renewed so that, among other things, free WiFi is available. With the reorientation, Billa gained more customers and addressed women in particular. The company expanded in both urban and rural areas. At the same time, Billa invested in online trading: Austria's first fulfillment center for groceries was opened in 2017 .

Billa is a sales line of the Rewe Group. Billa AG, a non-listed stock corporation under Austrian law , acts as the parent company . It is 100% owned by Rewe International AG. Billa is led by the two board directors Robert Nagele (spokesman) and Elke Wilgmann. In the 2016 financial year, the company had subsidiaries in Bulgaria, Germany, Croatia, Austria, Russia, Slovakia, the Czech Republic and the Ukraine. They are part of the group's scope of consolidation and are direct or indirect holdings of Billa AG or Rewe International AG.

Billa Classic is a classic local supplier with an average of 8,000 products that provides most of the company's branches. In comparison, the flagship store Billa Corso has a significantly larger range, especially in the delicatessen sector . After the main store in Vienna's Ringstrasse galleries , a second Billa Corso opened in 2010 in the Herrnhuterhaus on the Neuer Markt . With Salzburg, Klagenfurt and Graz, three further locations have now been added. Billa Corso has also been used as a private label for specialties since 2013.

In order to be represented in locations with less sales area, the company agreed a partnership with Jet in 2008 . Since then, Billa Stop & Shop can be found in selected petrol stations. In addition, experimented with small shops in the center of Vienna from 2009. Billa Box mainly offered ready meals , drinks and snacks . In 2013, Billa Box had five locations, but the concept ultimately proved unsuccessful.

The Billa online shop, which was started in 1999, has developed into an important sales channel for the company. The range includes products from all categories, including fruit and vegetables, as well as meat and sausages. The company has also been delivering frozen food since 2014 . In 2015, Billa was the first full-range supplier to expand its delivery area to all of Austria. The minimum order value is currently 40 €. Alternatively, customers can pick up a shopping basket ordered online from selected Billa branches. Mobile payment is offered in cooperation with Blue Code .

Billa branches have also existed in Romania since 1999. In 2017 all branches were taken over by the French retail chain Carrefour .