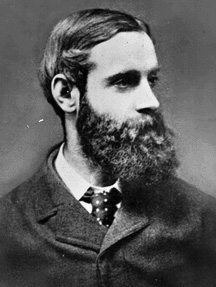 Randolph's father, John Caldecott, was a businessman who was married twice with thirteen children. Randolph was the third child of his first wife, Mary Dinah (née Brookes).

Already in his early childhood Caldecott drew and carved, especially animals and scenes from rural life. He was considered a child prodigy. During his youth, death was very near after an attack of streptococcal rheumatism , better known as rheumatic fever . For the rest of his life he suffered the aftermath of this illness. After graduating from King Henry VIII School in 1861 at the age of fifteen, his father found him an apprenticeship at Whitchurch & Ellesmere Bank in Whitchurch , Shropshire . The rural life appealed to him very much and he often hiked and rode across the country and began to hunt. Many of his drawings deal with these topics. In 1861 he published his first drawing about a fire at the Queen Railway Hotel in Chester, along with an article in the Illustrated London News .

At Salford Bank in Manchester 1868

After six years he moved to the Manchester & Salford Bank headquarters in Manchester in 1867, where he saw greater opportunities. In evening classes he attended the Manchester School of Art . Other drawings were published in newspapers and magazines. He also became a member of the Brasenose Club - a men's club that promoted the arts and science. In 1870 Caldecott met through his friend, the London painter Thomas Armstrong, the editor of the London Society , Henry Blackburn , who published several of his drawings in the monthly magazine.

In 1872, Caldecott left the Manchester bank and moved to London, where he illustrated for a variety of magazines including Punch , Harper's Monthly , and the New York Daily Graphic . In the same year Blackburn offered Caldecott the chance to accompany him to Germany and to illustrate his journey to the Harz Mountains . The resulting book was entitled: The Harz Mountains: A Tour in the Toy Country (1873). In 1880 the two repeated their trip together, this time to France in Brittany . This also resulted in a book: Breton Folk: An Artistic Tour in Brittany .

An overloaded "tram" in Vienna to boarding school. World Exhibition 1873

He entered the Slade School of Art , where he took up painting studies under Edward Poynter . He also attended the sculpting workshop of Jules Dalou , who lived in exile in Chelsea from 1871 to 1876 and then went back to France. In 1873 he made an agreement with Jules Dalou that he would teach him the English language and in return receive lessons in modeling. In London he befriended many artists such as Dante Gabriel Rossetti , George du Maurier , John Everett Millais and Frederic Leighton .

In 1872 he was inducted into the Royal Institute of Painters in Water Colors .

Caldecott managed to be sent as “London artistic correspondent” for the American newspaper “Daily Graphic” to the International Exhibition of 1873 in Vienna.

The Pictorial World was founded in London on March 7th 1874 and Henry Blackburn was the art director of the magazines. It was election time and Blackburn asked Caldecott for a cartoon. William Ewart Gladstone was defeated because of the " Home Rule ", the question of self-government in Ireland.

Caldecott's first illustration for a children's book appeared in Louisa Morgan's Baron Bruno: Or, the Unbelieving Philosopher, and Other Fairy Stories in 1875 .

In 1876 one of Caldecott's paintings was exhibited for the first time at the Royal Academy .

On January 23, 1874, the engraver James D. Cooper appeared with him. Caldecott should consider whether he would like to illustrate the sketch book by Washington Irving (1783-1859). Caldecott was not averse and so he started illustrating. The book was titled: Old Christmas: Selections from the Sketch-Book and was very well received. It describes Irving's nostalgic memories of Christmas customs in England in the 19th century. "Bracebridge Hall" followed later

This book caught the attention of Edmund Evans , a well known printer and engraver who had successfully collaborated with Walter Crane on a series of popular children's books. By the mid-1870s, however, their 12-year collaboration was broken, in part because of Evans' notoriously low match rate and because Crane wanted to pursue other interests. Evans was looking for a suitable replacement.

In 1877 Caldecott was commissioned by Evans to produce some illustrations for two planned children's books that were to appear in time for Christmas: The House that Jack Built (1878) and William Cowper's (1731–1800) tale The Diverting History of John Gilpin (1878) . There was already an edition of Cowper's book that was illustrated by George Cruickshank in 1828 . This proved so successful that Caldecott illustrated more children's books twice a year until his death. He also made several trips during which he made drawings with humorous text.

Caldecott worked for a time as a freelancer for the magazines Punch and The Graphic . His drawings for the Daily Graphic in New York were all reproduced by photo- lithography and printed on a lithographic printing press.

In June 1879 Juliana Horatia Ewing was in London and it was here that she met Randolph Caldecott, whose illustrations for Washington Irving's "Bracebridge Hall" and "Old Christmas" she knew and admired. She asked him - while "Jacknapes" was still simmering in her brain - whether he could make a colored drawing for the story in mind. But when the story was about to go out and Julie Caldecott couldn't send the story to be read - moreover, it took a long time to print in color - she asked Caldecott if he could make a drawing that would fit into one of the scenes. She suggested "a blond boy on a red-haired pony", imagining one of her nephews who was used to following the dogs. This color print appeared with the story in Aunt Judy's Magazine, but when it was printed as a book in 1873 the drawing appeared only in black and white and was much smaller. Caldecott also contributed illustrations to some of her other books, so it is not surprising that after the death of her sister Julia on May 13, 1885 in Bath, Horatia KF Gatty asked him to make a drawing to remember. A touching picture emerged.

In 1879 he moved to Kemsing in Kent near Sevenoaks , where he married Marian Brind a year later. The marriage remained childless. In 1882 the couple moved to Frensham , Surrey . In the same year he was elected a full member of the Royal Institute of Painters in Water Colors. Caldecott's books achieved high sales and became internationally popular.

For health reasons, Caldecott made several trips, such as B. to Monte Carlo and Menton .

Lured by American publishers, Caldecott traveled by ship to New York in 1886 and ventured further down the American Atlantic coast. He died suddenly and unexpectedly before his 40th birthday on February 12, 1886 in St. Augustine, Florida , where he was also buried.

In the USA, the Randolph Caldecott Medal has been awarded annually since 1938 to honor the best illustrated children's books. 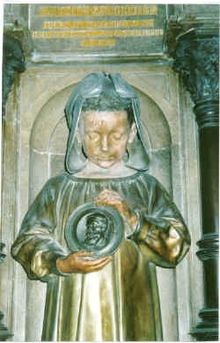 The memorial was designed by Alfred Gilbert RA (1854–1934) and paid for by Randolph's many friends. Randolph's brother Rev. Alfred Caldecott, DD, was a canon of St Paul's, which may have helped secure a place for him in the crypt at that location. The memorial is approximately 6 ft. (1.80 m) high and depicts a life-size girl with a worried expression, holding a medallion with a bas-relief image of Randolf Caldecott. What is unusual about this is that both the child's clothing and the headgear are made of aluminum. The child wears a traditional Breton costume reminiscent of the book "Breton Folk", which Randolph Caldecott made famous through its many illustrations. The inscription reads: "An artist whose sweet and dainty grace has not been in its kind surpassed: whose humor was as quaint as it was inexhaustible."

The books were sold for 1 shilling (5 pence today). It is believed that Caldecott was the first author / illustrator to negotiate a royalty per book sold with his publisher instead of a one-off amount. He received 1 penny per book. The first edition was careful with 10,000 copies. By July 1886, his books were so popular that 800,000 copies had been sold five months after his death.

Sing a Song for Sixpence (1880) was a song with historical significance. Sixty years earlier, a conspiracy, led by Arthur Thistlewood, was planned to kill 24 MPs over dinner on Cato Street. When the conspirators were discovered, one accused the other in hopes of saving his own life - hence "the birds started to sing". Parliament had passed some laws banning public gatherings and taking steps against any writings deemed incendiary, causing a wave of seemingly innocent poems (or acts) with hidden meaning.

One critic noted: A nursery rhyme is expanded by Caldecott through his illustrations to include humor and a depth in meaning not so present in the rhyme itself. The rhyme of "Baby Bunting" is based on just four lines: "Bye, baby bunting / Father's Gone a hunting / Gone to fetch a rabbit-skin / To wrap the baby bunting in." Seen with Caldecott's eyes, these 4 lines turn into a 12-page book, which is told almost exclusively through pictures. In the story of the pictures we see Baby Bunting's father trying in vain to catch a rabbit until his hunting dog leads him to a shop where he can buy a rabbit skin. Although the content of Caldecott's books is humorous and quirky, there is a tendency towards the macabre in his illustrations. For example in "Baby Bunting", when the little girl goes for a walk with her mother in her rabbit skin and meets a group of live rabbits, which look at the child with fascination.

In A Frog He Would a-Wooing Go (1883), the amphibious hero Caldecott humanized with a hat and jacket becomes. Both his friends, the rat and the mouse, are eaten by cats and the frog itself is eaten by a goose in front of the two young children. The she-bear in "The Great Panjandrum Himself" (1885) disappears in a similar way, while the royal children in Sing a "Song for Sixpence" (1880) stare with horror and amazement at their pie, from which blackbirds fly. 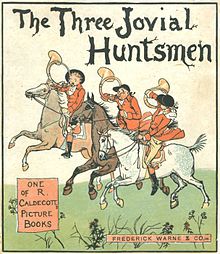 Maurice Sendak said that this was part of the underlying genius of Caldecott's art. “You can't say it's a tragedy, but it hurts sometimes. Like a shadow that flies by quickly. It is what defines a Caldecott book - however frosty the text and the pictures - its unexpected depth. ”Sendak has argued that Caldecott's contribution to children's literature“ ushered in the dawn of the modern picture book by creating a clever, invented a sophisticated juxtaposition of image and word, a counterpoint that has never existed before ”. Where words are left out, the images speak and vice versa. In short, it is the invention of the picture book.

Some scientists have noticed that Caldecott's particular strength lies in the fact that he humanizes animals with clearly human personalities. This aspect has undoubtedly influenced next generation children's book authors, such as: B. Maurice Bernard Sendak (1928–2012), Beatrix Potter (1866–1943) and Margaret Wise Brown (1910–1952).

In 1924 Bertha Mahony and her colleague Elinor Whiney founded The Horn Book Magazine , the first magazine exclusively devoted to children's books. As Bertha announced in the first edition, the main task should be "to blow the horn for fine books for boys and girls" and they chose Randolph Caldecott's famous book "Three Jovial Hutsmen" for their cover “Who blow their hunting horn in recognition of its immense impact in the world of children's book illustration. Even today the hunting horn symbolically blows the fanfare to announce the best children's books of the year.