This article describes the French city. For the lowest point of the lower jaw, see craniometry .

View of the old town of Menton

Menton [ mɑ̃ˈtõ ] (in Occitan [meⁿˈtaⁿ] , which is written in the classical norm Menton , in that of Frédéric Mistral Mentan ; in Italian Mentone ) is a municipality , at the same time a city , in the French department Alpes-Maritimes on the Côte d'Azur in the Provence-Alpes-Côte d'Azur region with almost 30,000 inhabitants. The municipality is on the border with Italy across from Ventimiglia . Menton is the first French place after the Italian border and thus also the first or most easterly French place on the Côte d'Azur.

Protected by the foothills of the Maritime Alps in the hinterland, Menton is characterized by a particularly mild climate.

Thanks to its protected location, Menton is the warmest place on the French Côte d'Azur even in winter. The most pleasant months to travel are May and mid-September to mid-October. The months with the most rain are February and March. In general, the temperatures are a few degrees above the temperatures in Germany. The months June to August can get very hot. However, many events and exhibitions take place in August, the holiday month for the French and Italians. The winters are mild, there is hardly any frost in Menton, and snow falls about every ten years.

In Roman times, the bay of Menton was called Pacis Sinus ("peaceful bay"), but nothing is known about a settlement from this time.

Until 1146 the city was owned by the Counts of Ventimiglia . Then Menton was under the rule of the commune of Genoa or the Genoese Vento family until it came to the Grimaldi of Monaco together with Roquebrune in 1346 .

Monegasque rule lasted until 1848, in the same year the city of Menton and Roquebrune rose against the taxes imposed by Monaco and proclaimed an independent republic. Then the French Emperor Napoléon III attacked. and bought Menton from the Monegasque royal house.

In 1861, the residents of Menton voted to belong to France. Tourism started at the end of the 19th century. At that time, the climate on the Côte d'Azur was recommended by doctors to promote the healing of tuberculosis. That is why this city was a popular winter quarter for the English and Russians in the 19th century. Among other things, the British Queen Victoria stayed here on her winter holidays. You can still admire the large hotels and gardens that were built for the English at the time, as well as an Orthodox church.

In 1872 the city was connected to the railway network via the Marseille – Ventimiglia line. During the First World War , numerous wounded soldiers were staying in Menton to recover.

The Irish poet William Butler Yeats died in Menton on January 28, 1939 . During the Second World War Menton was quickly occupied by Italians with the surrender of France, and in 1943, after the surrender of Italy, by the Germans, from whom it was taken away in 1944 during heavy fighting. Menton was in ruins and it wasn't until the mid-1960s that the city was rebuilt. Since then, tourism in Menton has developed strongly. With the growing mobility of the affluent population of northern Italy, Menton gradually came back under Italian influence. Since the end of border controls and the introduction of the euro, many Italian citizens have found a new home here.

Description: The coat of arms is split into blue and silver. In front everything in gold, the Archangel Michael is standing with his right leg on a prone lying devil, holding the trident in his right hand and holding a sword ready for stabbing in his right hand and a pair of scales in his left . In the back a green tree, growing out of a green mountain, bearing eight golden lemons . The blue sign foot is through wave cut and the blue shield main with three silver five-pointed bar setting made stars just separated.

The economy of Menton is characterized by tourism and service offers. Many Menton residents work in Monaco, twelve kilometers away, and Nice, which is 25 kilometers away . The construction industry has been firmly in Italian hands since the internal European borders disappeared.

The climatically favorable location made lemon cultivation the most important branch of business in the 19th century . Today the traditional cultivation is of little economic importance. The lemon, to which the Fête du Citron (Lemon Festival ) has been dedicated since 1934 (late February - early March), is the symbol of the city. More than 1000 tons of citrus fruits are needed for the preparation of the moving van and the decoration of the Parc Biovès, which today come mostly from Spain because of the huge amount required. Lemon jam from Menton is a popular souvenir from tourists.

On the beach in Menton

The annual lemon festival has been celebrated since 1930.

An international chamber music festival is held in August.

Another type of Provencal language is spoken in Menton , which is called "Mentonasc" and represents the transition to the Ligurian language .

Sailing competitions are held in Menton. In addition, every year in July or August there is a kart race near the new port.

The old town with its pastel-colored house facades has a strong Italian flair. The city has numerous gardens and parks, especially in the suburb of Garavan, with some rare subtropical plants that thrive particularly well in Menton's favorable microclimate. The Promenade du Soleil, the waterfront in Menton, with a beautiful beach is less touristy than z. B. Nice and Cannes . 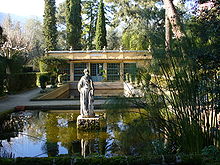 Municipalities in the Arrondissement of Nice