Scapa Flow is a bay that results from the location of the islands of Mainland , Burray , South Ronaldsay , Flotta and Hoy in the southern part of Orkney ( Scotland , United Kingdom ) . This creates a kind of closed "inner lake" of around 10 km × 15 km with entrances and exits. The ferry connections between Houton on Mainland and Lyness on Hoy and to the island of Flotta run through Scapa Flow. 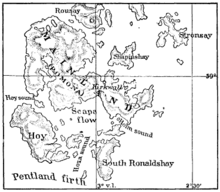 Since the bay is protected, it has been used as a natural harbor more often in history . Already the Vikings gathered their ships here in the 13th century and gave them the name Skalpafloi . The port also played an essential role in Napoléon Bonaparte's time. The British operated with their fleet from there trading relations with the Baltic States . Even today some relics from this time remind of it, B. The Martello Towers on Longhope in the southeast of Hoy, built in 1813-1815 to protect against a possible Napoleon invasion . The British Navy established the main base of their fleet here both in World War I and in World War II . In both world wars, German submarines invaded the bay.

During the First World War on November 23, 1914, the German submarine SM U 18 under the command of Lieutenant Heinz von Hennig was able to penetrate the bay through the Hoxa Sound , the main entrance in the south. It had hitched itself to an incoming freighter and so overcame the barriers. Because the British had evacuated the base at that time, U 18 did not find a worthwhile destination. While retreating, the boat was discovered and rammed by a minesweeper ; the crew was taken prisoner.

On May 31, 1916, the Grand Fleet ran under the command of Admiral John Jellicoe from Scapa Flow to the Battle of the Skagerrak . On June 5, 1916, the British Minister of War, Lord Horatio Herbert Kitchener , wanted to go to Arkhangelsk on board the armored cruiser HMS Hampshire to conduct important negotiations with Russia. The Hampshire left Scapa Flow through the Hoy Sound. A little later she ran west of Mainland on a sea ​​mine and sank within 15 minutes. There were only twelve survivors, Lord Kitchener and more than 600 crew members drowned.

On October 18, 1918, UB 116 attempted under Oberleutnant zur See Hans-Joachim Emsmann with a volunteer crew to penetrate Scapa Flow. But the Hoxa Sound was not as expected free of nets and mines. The screw noises of the German submarine were discovered by underwater listening devices; around 11:30 p.m. searchlights spotted his periscope . An entire mine barrier was triggered by remote ignition and UB 116 was destroyed.

After the armistice , 74 ships of the German deep sea fleet were interned in Scapa Flow. There Rear Admiral Ludwig von Reuter gave the order for the fleet to self- sink on June 21, 1919 . He suspected that the German government would not accept the Versailles Peace Treaty and would therefore be at war again the next day. The German fleet should not fall into the hands of the British. With a few exceptions, all German ships sank. Today seven ships are still lying on the seabed and serve as a popular destination for diving trips.

During the Second World War , the German submarine U 47, under the command of Lieutenant Günther Prien , managed to penetrate the Bay of Scapa Flow through Kirk Sound on October 14, 1939 . He was able to sink the British battleship HMS Royal Oak with a crew of 833 and then leave the port again. Prien and Scapa Flow subsequently became famous through Nazi propaganda . After this incident, all eastern entrances, which had previously only been blocked by block ships, were blocked by solid barriers. These so-called Churchill Barriers were built by Italian prisoners of war . The islands of South Ronaldsay , Burray, Glimps Holm and Lamb Holm are navigable from the Mainland. On October 17, 1939, the I. Group of Kampfgeschwader 30 flew an attack with their Junkers Ju 88 in which the Iron Duke was hit by bombs and had to be put on the ground. 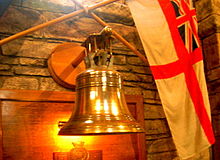 Memorial to the Royal Oak in Magnus Cathedral, Kirkwall 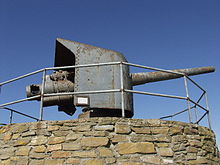 The fleet base remained in operation until 1956. In 1977 the Orkneys Council acquired the abandoned Lyness base . It was expanded into a visitor center in the following years. In April 1990 the Scapa Flow Visitor Center was opened. Various photos, models and relics are exhibited in the former pump house. In front of the house are two 15 cm guns from the cruisers SMS Karlsruhe and SMS Bremse .

Since the first tests of atomic bombs , the environment has been contaminated with small amounts of radioactive nuclides and the steel produced since then has been low in radioactivity. In order to be able to measure very low activities , measuring cells made of so-called low-background steel are required . This is steel that was made before the first nuclear weapons tests. An important source of this steel are the sunk ships of the German navy.