This article covers the concept of geography. For other meanings, see Bay (disambiguation) .

Bay on the Banks Peninsula on the east coast of New Zealand , south of Christchurch

A bay is a geographical object enclosed on three sides by higher terrain on a local or regional scale. Usually the term is used for terrain below a body of water , so that the bay expresses itself in the form of an approximately arc-like receding of the shoreline. On dry land, this is also used to describe areas that are surrounded by a mountain front that recedes almost like an arch. In the case of water, the bay is the counterpart to the headland .

A bay lying in a body of water is a section of a lake or sea that protrudes into the shore or coastal area as a “bulge” . On flat coasts , small bays are often separated from the open sea by spits . On the southern coast of the Baltic Sea, such cut-off bays are also called lagoons . Sea bays whose opening to the open sea is less than 24 nautical miles wide (Art. 10 UNCLOS ) count as inland waters under international law . Under a minimum width of 3.5 nautical miles and a certain minimum depth, bulges in the sea may not be referred to legally under international law as a bay, but as a fjord or fjord .

In larger bays there can be islands , peninsulas or a Wadden Sea . The bottom is mostly flat, but it can also be shaped as a small basin .

In a comparison of the physical geography (left) and geology (right) of Germany, the three large lowland bays of Cologne Bight, Westphalian Bight and Leipzig Bight stand out as an extension of the Quaternary-dominated North German Plain (Central European Depression), which extends into the low mountain range threshold (dominated by the Paleozoic Basement and Mesozoic table top mountains) protrude.

Bays on land areas are approximately arch-shaped extensions of lowlands (then also referred to as lowland bays ) or at least areas with less relief that protrude into an adjacent mountain range or an area with more relief. As a rule, these are marginal subsidence areas of the corresponding plateaus, which can often be demarcated from the neighboring high areas in geological maps by their structure from younger layers (e.g. Paleozoic basement vs. Mesozoic table top mountains or Mesozoic table top mountains vs. Quaternary ) . 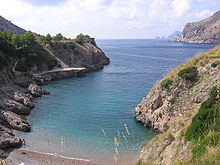 A caletta on the Gulf of Naples