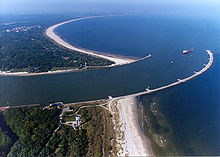 The Pomeranian Bay ( Zatoka Pomorska in Polish , Pòmòrskô Hôwinga in Kashubian , in the GDR: Oder Bay ) is a bay in the southwest of the Baltic Sea on the coasts of Germany and Poland .

In the south it is separated from the Stettiner Haff and the Oder estuary by the islands of Usedom and Wollin . The connection to the lagoon is made by the three waterways Dziwna (Eng. Dievenow ), Świna (Eng. Swine ) and Peene . In the west, the Pomeranian Bay is bounded by the island of Rügen .

The maximum depth is 20 meters and the salinity is around 8 per thousand. The Pomeranian Bay is crossed by an artificially deepened waterway, which also allows larger seagoing vessels to call at the ports of Szczecin and Swinoujscie .

The main ports on the bay are:

Since the definition of the Oder-Neisse line as the state border between Germany (or the GDR ) and Poland, the German-Polish state border runs through the Pomeranian Bay.

After incidents involving naval ships between 1986 and 1988 (see Volksmarine ), the Görlitz Treaty of 1950 was expanded by signing a treaty on May 22, 1989 between the German Democratic Republic and the People's Republic of Poland on the delimitation of the sea areas in the Oder Bay . This was confirmed by the German-Polish Border Treaty in 1990.

In 1995, the Polish Council of Ministers passed a resolution according to which the sea access (north approach) to the two ports should be regarded as Polish territory. In the light of the international treaty of 1990, this was a unilateral dispute without a basis relevant to international law.

Nevertheless, at the end of August 2006 there were slight upheavals in the relationship between the two states when Poland's Minister for Maritime Economics, Rafał Wiechecki, intervened in the emphatic form of a diplomatic note against alleged border violations by warships of the German Navy during a sea maneuver in the Pomeranian Bay.

On the German side of the bay, a 200,938 hectare area was declared a Pomeranian Bay nature reserve by ordinance of the Federal Minister for the Environment, Nature Conservation and Nuclear Safety of September 15, 2005 ( Federal Law Gazette I p. 2778 ) with effect from September 24, 2005 .

On the German side of the Pomeranian Bay are the three emperor baths of Usedom ( Ahlbeck , Bansin and Heringsdorf ) and on the Polish side the seaside resorts of Świnoujście and Międzyzdroje ( Misdroy ).

The InterCity line from the Baltic Sea resort of Binz via Berlin and Erfurt to Düsseldorf is called “Pomeranian Bay”.