This article describes the physical geography of Galicia , a former crown land of the Austro-Hungarian Danube Monarchy .

The territory of Galicia (within the borders of the Crown Land in 1914) today covers: 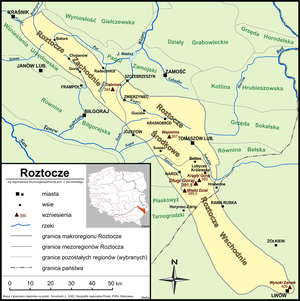 Galicia is traversed by many rivers and their tributaries in the upper reaches , some of which grow into large rivers in the further course outside the country. The northern edge of the Beskids and Forest Carpathians is the headwaters for the Vistula , San , Dniester , Pruth and Sereth , the part of the Podolian plateau in Galicia for the Western and Southern Bug . The headwaters of the Styr can be found in the northeast near Brody .

Apart from the sea ​​eyes in the Carpathian Mountains , there are no lakes in Galicia. However, there were extensive fish ponds , which in the middle of the 18th century covered an area of ​​approximately 550 square kilometers.

The dominant feature of the Galician landscape is the western part of the Carpathian Mountains , the Beskids . Soft sandstones , clay slate and marl are involved in the geological structure of these mountains .

The western Beskids reach up to Dunajec and have their highest peak in Babia Góra with 1726 m. The Eastern Beskids are divided into a lower and a higher plateau by the upper reaches of the San. The western part of the East Beskids is less forested, but rich in spas and health resorts.

A special position in the Carpathian Mountains is occupied by the 60 km long High Tatras , which are considerably higher than the rest of the mountain range. The geologically older Tatras are largely made of granite , which has withstood erosion better. The “ Gerlachspitze ” , which is constantly covered in snow, reaches 2663 m. During the Ice Ages , the Tatra Mountains were also heavily glaciated ; Evidence of this are the many sea ​​eyes - small, very deep waters without any drainage. At the foot of the steep north face of the Tatras lies the Podhale landscape , a barely 600 m high area with the famous spa and winter sports resort of Zakopane as its center.

The mountainous area on the northern slope of the Carpathian Mountains is made up of the same rock as the Carpathian Mountains themselves, but repeated sea formations in this area have led to diverse deposits, so that rich mineral resources such as salt, oil , natural gas and asphalt ( Boryslaw and Krosno ). Between the San and the Dniester the pre-Carpathian mountainous region reaches its greatest extent and extends as far as Lemberg . Numerous gravel and rubble deposits mark ancient river courses. During the Ice Age, the Dniester drew some of its water from today's headwaters of the Vistula. As a relic of this old catchment area you can find the rare phenomenon of the bifurcation with the Wisznia brook , the brook divides and leads its water in one arm to the Vistula, which flows into the Baltic Sea , with the other arm to the Dniester, which in the Black Sea drains.

The pre-Carpathian mountainous region extends in the north approximately as far as the Kraków – Lemberg railway line , where it descends in an approximately 100 m high slope to the pre-Carpathian lowlands . Its western part, the Vistula plain , extends from Kraków to Przemyśl and is widest in the Vistula-San triangle. Sandy deposits from the Ice Age have made this part of Galicia a barren, e.g. Partly made with pine forests covered landscape.

The Dniester plain is limited to the narrow river valley, which becomes a large swamp area about 60 km southwest of Lviv . However, further to the east, the Dniester cuts deeper and deeper and finally flows into canyon-like gorges with steep walls up to 200 m high. The deep gorges of the Dniester and its left tributaries are no longer characteristic of the Subcarpathian Mountains, but already belong to the Podolian Plate , which protrudes over the former Russian border into Galicia. This 300 to 400 m high, loess- covered table land is an excellent growing area for wheat and maize .

The Pokutien , located south of it between the Dniester and Prut, is an extension of the Bessarabic Plate. The karst landscape is characterized by numerous sinkholes and underground watercourses with many (gypsum) stalactite caves . Coming from the north, from Lublin , the ridge of the Roztocze juts out into the country as far as Lemberg. To the east of it, as far as the Podolian plateau, the foothills of the Volhynian lowlands extend .

With the exception of Podolia , the maritime climate typical of the temperate Central European zone predominates in Galicia . Western oceanic winds dominate. The mean temperature of Lviv is in degrees Celsius:

Podolia, however, is under the influence of the continental climate coming from Russia . The winter is much colder here, the summer drier.