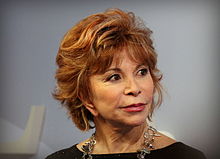 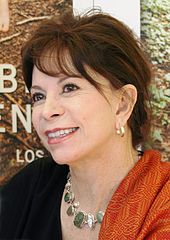 Isabel Allende Llona [ isaˈβel aˈʝende ] (born August 2, 1942 in Lima , Peru ) is a Chilean - American writer and journalist . Her works have so far been translated into 27 different languages ​​and she has sold over 51 million copies.

Isabel Allende's father, Tomás Allende, was a Chilean diplomat in Lima. Her mother Francisca Llona, ​​called "Doña Panchita", is the daughter of Agustín Llona Cuevas and Isabel Barros Moreira. She married for the second time when her daughter was eleven years old: Ramón Huidobro, for Isabel "Tío Ramón" (Uncle Ramon). Allende's father is the cousin of Salvador Allende (1908–1973), who had been Chilean president from 1970 until he was killed in the bloody coup in 1973 that brought dictator Pinochet to power. So Isabel Allende is 2nd degree niece of Salvador Allende and the 2nd degree cousin of his daughter, the politician of the same name Isabel Allende .

In 1945 her parents separated and the mother returned to Santiago de Chile with her now three children. Isabel Allende spent most of her childhood with her siblings with her mother and grandfather.

Allende's mother remarried a Chilean diplomat, Ramón Huidobro, in 1953, so that her daughter went to school in Latin American, European and Arab capitals and got to know the world at a young age. First they moved to La Paz in Bolivia, where Allende attended an American private school. From 1956 to 1958 they lived in Beirut in Lebanon, where Allende attended a private English school. Then she returned to Santiago de Chile, where she finished her school years at another private school and met her first husband, the civil engineer Miguel Frías, whom she married in 1962.

From 1959 to 1965 she worked as a well-known television journalist for the information service of the Food and Agriculture Organization of the United Nations (FAO). She hosted a weekly television program about the World Campaign against Hunger.

After Allende's first child Paula was born in 1963, the family traveled all over Europe and temporarily lived in Brussels and Geneva . In 1966 the family returned to Chile, where Allende gave birth to their son Nicolás.

In the meantime, Allende has developed into a committed journalist and women's rights activist; together with other women's rights activists, she founded the magazine Paula , which until then was the only feminist magazine in Chile. In it she wrote for the Popular Front government . She was also responsible for the humorous column The Impertinence , publisher of the children's magazine Mampato in Santiago de Chile and wrote in 1973 for the film magazine Maga-Cine-Ellas . Furthermore, she worked for channels 7 and 13 of Chilean television and moderated programs that enjoyed great popularity, including Conversando con Isabel Allende (conversation with Isabel Allende) as well as interviews, reports and discussions. She published two children's stories, La abuela Panchita and Lauchas y Lauchones , also a collection of short stories, Civilice a su troglodita .

Allende's life changed dramatically in 1973 with the military coup of Augusto Pinochet , in which Chile's President Salvador Allende was killed, who was a cousin of Isabel Allende's father (incorrectly he is often called her uncle ). In the same year, her piece El embajador was premiered in Santiago. In 1975, two years after the coup, she went into exile in Venezuela with her husband and two children . There she lived for the next 13 years and worked for the newspaper El Nacional in Caracas and as a teacher at a school.

In 1981 her grandfather died at the age of 99. She started writing him a letter. From this the manuscript developed for her first novel Das Geisterhaus , which made extensive reference to the political situation in Chile after the Pinochet dictatorship. This book became a worldwide success. The Danish director Bille August filmed it in 1993 under the same title .

The Allende / Frías couple separated for two months as early as 1978, and in 1987 the first marriage was divorced. In 1988, while visiting California , she met her second husband, Willie C. Gordon , a former San Francisco attorney and novelist who had three children and married on July 17 of the same year. Isabel Allende has lived in San Rafael ever since . In 2003, she received US citizenship. In 2015, she separated from Gordon. Since January 2018 she lives with the lawyer Roger Cukras.

Allende's 1994 novel Paula commemorates her childhood in Santiago and her years in exile. She wrote it in the form of a letter to her daughter, who was in a coma in a Madrid hospital because of wrong medication and who died in 1992. She suffered from porphyria .

In addition to novels, Isabel Allende worked as a journalist, wrote plays and taught literature at various universities. Through her journalistic work, she campaigned primarily for women's emancipation and gender equality and became known as a socially critical and feminist author.

Allende knows how to convey the culture, history and suffering of her homeland in an impressive way in her novels. Her own biography - especially that of her family - plays a major role in many works. She claims to speak out on behalf of those who were condemned to silence under the Pinochet regime in Chile.

Literary critics had celebrated The Haunted House , but were not at all impressed by their latest novels. Elena Poniatowska described Allende as a "commercial phenomenon". In his review of Maya's diary , the influential Chilean critic Camilo Marks criticized “inconsistencies”, “exaggerations”, “simplifications”, “clichés” and “generalities”, but at the end agreed with a sentence by the protagonist Maya: “You can do that Melodrama don't do without, because the bottom line is it's more interesting than normal. ”The Frankfurter Allgemeine Zeitung saw Maya's diary “ in the depths of the doctor's novel ”, full of“ set-like imitation ”with an“ attempted drastic ”and felt a“ musty, morally sour smell ”.

The Süddeutsche Zeitung called Allende "the queen of kitsch". Although the Frankfurter Allgemeine Zeitung concedes that the first "home-bred" novels "were nevertheless counted for upscale entertainment," holds Allende meantime, however, for "increasingly verpilchert " sees in the novel The Japanese lovers "only Groschenromanödnis" and expects this "to Genre of Schmalz Literature ”- even though Allende himself attested that her title character had an“ exquisite inner quality ”.

She has been a member of the American Academy of Arts and Letters since 2004 .

The haunted house  | Of love and shadow | Eva Luna | The stories of Eva Luna | The Infinite Plan | Paula  | Aphrodite. A celebration of the senses | Fortuna's daughter  | Portrait in sepia  | The city of the wild gods  | My invented country | In the realm of the golden dragon  | Under the spell of masks  | Zorro | Inés of my heart | The seal of the days | The island under the sea