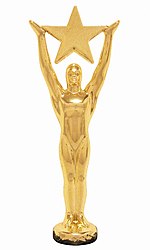 The statuette of the Young Artist Awards

The Young Artist Awards ( acronym : YAA ; until 1999 known as Youth In Film Awards ) are a film and television award for young actors and actresses given annually in the USA by the Young Artist Foundation , a non-profit organization founded in 1979 . In addition to the film award itself, the Foundation also provides grants for promising young actors who would otherwise not be able to meet the necessary financial requirements. It was also the first organization to specifically host an award ceremony for artists under the age of 18 in the fields of film , television , theater, and music .

The first award ceremony took place in November 1979 at the Sheraton Universal Hotel in Hollywood and honored the young artists of the film years 1978 and 1979 . The last awards to date, at the 34th ceremony , were given on May 5, 2013 at Sportsmen's Lodge, a hotel in Studio City , Los Angeles , for artists of the 2012 film year .

The purpose of the Young Artists Award is to draw attention to young actors who would otherwise hardly be in the public eye. As of 2011, prizes will be awarded in a total of 44 categories. The prize was first awarded in 1979 (for films from 1978–1979). In 2010, German-speaking young actors received an award for the first time. Were awarded Leonie Benesch and Leonard Proxauf for her performance in the drama The White Ribbon - A German children's story . The award ceremony takes place every spring in Studio City , California . Similar to the Oscars , the Young Artist Award is moderated by other young artists .

The Young Artist Awards are mainly given in the two categories of film, television and theater. The different categories that emerge are partly subdivided again according to genre and the age of the actors.