The following parts of this article appear since 2014 is out of date to be : About www.cinemaxx.com the page or .net are (November 2018) no more company information accessible. and the numbers are therefore not verifiable.
Please help to research and insert the missing information .

The CinemaxX Holdings GmbH is a German theater company and subsidiary of Vue Entertainment .

The CinemaxX Holdings GmbH was as CinemaxX AG founded in 1998th The company operates 29 CinemaxX branded cinema centers in Germany and three more in neighboring Denmark (as of July 2012). It was the first cinema company to be listed on the Frankfurt Stock Exchange. As part of the takeover by Vue Beteiligungs GmbH , a stock exchange delisting was carried out on April 25, 2014. The company's founder and long-term chairman of the board was Hans-Joachim Flebbe , the Hanoverian cinema king . In some cities, such as Hanover, one sometimes speaks of the Flebbe cinemas .

After Flebbe withdrew to the supervisory board, the previous second member of the board for "Human Resources, Finance and IT", Christian Gisy, headed the group as sole board member until mid-2008. On December 11, 2008, Thilo Rieg was appointed second member of the board. On January 21, 2009, Flebbe resigned from the Supervisory Board, which was cut in half from twelve to six members. On June 1, 2012, CinemaxX AG parted ways with the previous second director Thilo Rieg by mutual agreement. On July 4, 2012, the Supervisory Board appointed Christoph Ahmadi to the Management Board. The company has been led by Carsten Horn since February 2015.

The largest shareholder was the film dealer Herbert Kloiber , whose Tele München Group owned around 69 percent of the largest German film theater group as of August 12, 2009 and increased its stake to 72.5% through a capital increase in March 2010. On July 10, 2012 it was announced that the British cinema operator Vue Entertainment would like to take over CinemaxX AG for around 174 million euros. After taking over 95 percent of the shares, an application was made in October 2012 for the squeeze-out of the minority shareholders, which was successfully completed on February 6, 2014.

In the course of the takeover, CinemaxX AG was converted into CinemaxX Holdings GmbH .

A Cinemaxx store opened in Darmstadt in the spring of 2000, which was taken over by the Kinopolis Group in the same year , but still bore the Cinemaxx logo until December 2013. 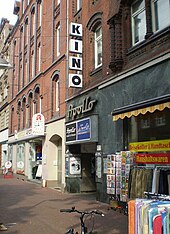 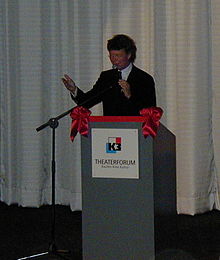 Hans-Joachim Flebbe on November 15, 2000 at the opening of the Cinemaxx Heilbronn

In 1973, Cinemaxx company founder Hans-Joachim Flebbe entered the cinema industry. As a student, he asked at the box office of the Apollo cinema in Hanover whether film proposals would be accepted. His programming brought back sold-out performances to the theater, which was previously in crisis.

In 1977 Flebbe opened his first own cinema in Hanover on Raschplatz . Just one year later, the cinema on Raschplatz received an award for an “excellent annual program” from the Federal Ministry of the Interior . In the 1980s, the company took over numerous other cinemas in Germany, including the Holi in Hamburg and the Lupe cinemas in Braunschweig and Berlin.

Entry into the multiplex business

In 1989, Hans-Joachim Flebbe founded the Cinemaxx company together with media entrepreneurs Rolf Deyhle and Bodo Scriba . The first Cinemaxx opened in Hanover on March 8, 1991 . On December 11th of the same year the house in Essen followed , which with its 16 halls and a total of 5300 seats remained the largest multiplex cinema in Germany until December 2011 . As early as 1992, the Cinemaxx Hannover was the economically most successful cinema in Germany, followed by the Cinemaxx Essen. On the Brussels Exhibition Cinema EXPO Flebbe was named "Pioneer of the Year 1992".

In 1993 the Maxx in Munich and in 1995 the Cinemaxx cinemas in Kiel and Halle were opened. Other new openings in 1996 were the stores in Magdeburg and Göttingen.

On October 3, 1996, the "Filmfestspielhaus" Cinemaxx Hamburg-Dammtor was added, located southeast of the station of the same name. With 969 seats - which was generously "virtually expanded" to 1001 seats for advertising - the largest new hall in Germany after the cinema industry in the 1970s and 1980s in the opposite direction to convert large cinemas into cinema centers, some of which were tiny Rooms ("box cinemas"). Over the years, several big premieres have taken place here in the presence of many stars, including Contact with Jodie Foster , Eyes Wide Shut with Tom Cruise and Nicole Kidman , Postman with Kevin Costner and the 2004 German premieres of Catwoman and Der Polarexpress .

In 1997 Cinemaxx built five more multiplexes in Germany, including the Cinemaxx Berlin-Colosseum. In 1998 Cinemaxxe followed in Bremen , Regensburg , Mülheim an der Ruhr , Berlin-Hohenschönhausen , Bielefeld and the film festival theater Cinemaxx Berlin- Potsdamer Platz , which is also used annually for the Berlinale . A further twelve cinema complexes were added in 1999 and 2000. The last Cinemaxx cinemas opened in Germany were those in Heilbronn , Wolfsburg , Dresden and Braunschweig (2000), the second Cinemaxx cinemas in Hanover (December 14, 2000), Stuttgart , Delmenhorst (2001) and Halle-Neustadt (2002).

Takeover of the Ufa cinemas

In 2000, CinemaxX AG took over the operational management of the Ufa cinemas through an equity stake and an agency agreement . This merger resulted in 623 screens at 54 locations with around 30 million cinema-goers (1999), Germany's largest cinema group at that time. However, the cooperation only lasted a few months, since after the multiplex construction boom and the number of visitors declined, many cities were oversupplied and the Cinemaxx and Ufa theaters were also in direct competition at some locations. In 2003, the competitor Cinestar took over the Ufa cinemas and replaced Cinemaxx as the industry leader.

In summer 2009 it was announced that Cinemaxx would install technology for showing 3D films in 60 halls across Germany by the end of the year . The company invested over five million euros in this. Technology from Sony and Real-D is used under the name MaxXimum 3D . The maximum resolution should be 4K (2K for 3D films).

On August 1, 2013, the Cinemaxx, which opened in 1991 as the first Cinemaxx cinema ever, was closed in Hanover's Nikolaistraße. The CinemaxX AG could not agree with Hans-Joachim Flebbe, the property bought in 2012 for an extension of the lease itself. A year later, the former Cinemaxx opened after renovations to “Germany's largest premium cinema” with increased comfort and again under Flebbe's direction under the name Astor Grand Cinema , now in the city in competition with the existing Cinemaxx cinema.

In October 2018, parent company Vue announced that it would also take over competitor Cinestar. The market leader is thus expanding its lead over the No. 2, the Cineplex group.

CinemaxX AG has also opened cinemas abroad. After the first opening of a Cinemaxx in Ankara ( Turkey ) in 1998, further cinemas were opened in Europe , in Emmenbrücke in Switzerland (2000), in Odense , Copenhagen and Aarhus (all three in Denmark ) as well as in Barcelona and other parts of Spain .

With the exception of the Danish cinemas, the foreign holdings have now all been sold again. 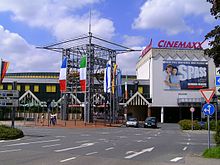 Cinemaxx next to the RheinRuhrZentrum

In addition to the premieres already mentioned - especially in Hamburg and Berlin - CinemaxX AG has other special events in its program. The Fantasy Film Festival takes place every year in the Cinemaxx cinemas in various cities . For example, the Hamburg Film Festival is held at Cinemaxx Hamburg . For a while, parts of the Hamburg Lesbian and Gay Film Festival also took place there. Further events were created through a cooperation with ProSieben . In many cinemas of the Cinemaxx Group, an extensive supporting program including a live broadcast of the award is offered every year for the Oscar award. The Cinemaxx at Potsdamer Platz in Berlin, on the other hand, is the official festival cinema of the Berlinale , and the international Berlin International Community Church celebrates various services here every Sunday with several hundred visitors. The Cinemaxx Heilbronn housed the municipal cinema of the city of Heilbronn; due to chronically low audience numbers, this cooperation was terminated by the operator in summer 2012. In some cities, since the 2006 World Cup, games from the World Cup have been shown live and free of charge on the big screen. Some Cinemaxx cinemas also show current editions of the ARD crime series Tatort live, and some operas and other music and theater performances from major international theaters are broadcast live in Cinemaxx.

After a massive decline in visitor numbers since the mid-1990s, the Cinemaxx Group is looking for new ways of addressing the public. In March 2006, a guest company called Cinegamez converted a cinema into a computer games room in the largest, less busy Cinemaxx in Essen . Despite public attention for the experiment and in part supra-regional reporting, the number of visitors remained low overall. There were also difficulties with the public order office, which rated the facility as an amusement arcade, which would have resulted in a ban on admission for young people and high entertainment taxes. Cinegamez was closed again in July 2006. In December 2006 the first luxury cinema in Germany was opened in the same hall. 292 cinema seats in rows were replaced by 104 individual leather seats with tables. A bar is served on the square. The facility is intended to attract a special audience with high demands with increased admission prices.