The district was located in the northeast of Berlin and bordered the former districts of Weißensee , Prenzlauer Berg , Lichtenberg and Marzahn as well as the district of Barnim . The shape of the border resembled a knight's head , which is often used as an allusion to the past as a manor .

The village of Hohenschönhausen had existed since around 1230; the first documentary mention took place in the years 1352 and 1356. At first, the village was not very different from the surrounding villages of Malchow , Wartenberg and Falkenberg , but the closer location to Berlin encouraged rapid growth in the late 19th and early 20th century.

In 1920, Hohenschönhausen became part of the 18th Berlin district of Weißensee through the Greater Berlin Act . With around 5300 inhabitants, it was the second largest district in the district after the Weißensee, which gave it its name. With Weißensee, the later district area fell into the Soviet sector after the war and thus shared the history of the GDR .

Until the end of the 1970s, Hohenschönhausen was able to maintain its village character, although the development bore its fruit and left an urban appearance. The village center, however, still had its original structure with several courtyards and cottages .

While the construction was still in full swing, the Politburo of the Central Committee of the SED proposed in January 1985 the formation of an independent Hohenschönhausen district . On April 11 of the same year, the Berlin city council passed the relevant resolution. On September 1, 1985, the districts of Hohenschönhausen , Wartenberg , Falkenberg and the eastern part of Malchow were spun off from the Weissensee district and combined as an independent district of Hohenschönhausen. On January 1, 1986, the district of Weißensee was assigned the Pankow districts of Heinersdorf , Karow and Blankenburg , as it would otherwise have consisted of only one district . The district had a population of 67,045 at the end of the year.

The further development concentrated for the time being on the new building area. In addition to the approximately 30,000 apartments, several shops, restaurants, schools, leisure facilities, an optimal connection with public transport to the Berlin city center and, not least on the initiative of the Hohenschönhauser themselves, also green areas were built. The center of the district was the Prerower Platz with the trading house , which later had to give way to the Linden Center .

The prefabricated housing estate between Alt-Hohenschönhausen and Wartenberg

In the first few years the district was characterized by rapid population growth, which was mainly promoted by the influx of young families. At the time of the political change , Hohenschönhausen, with around 120,000 inhabitants, made up 9.2 percent of the total population of East Berlin .

After German reunification , the population initially increased until 1994, when it reached its historical high of 119,686 inhabitants. However, within ten years it shrank by over 10,000 to an estimated 105,000 today. The decline is mainly due to the departure of young families who lived in the district in the first few years of its existence, whereas older people in particular do not leave the district. The result is that the average age is now almost 40 years compared to a value at the turn of the millennium with an average age of around 25 years.

When it was founded in 1985, Hohenschönhausen was one of the youngest districts in East Berlin . The number of pupils and thus also the number of schools in the district was correspondingly high. In 1992 there were 28 primary schools alone and 13 secondary schools. The district assembly assumed this year that the number of schoolchildren would rise continuously up to the year 2000, precisely because of the young population structure. As a result, the Berlin Senate approved the construction of four new schools, which were built between 1993 and 1998 on Wartiner Strasse ( grammar school ), Darßer Strasse ( comprehensive school ), Prendener Strasse (comprehensive school) and on Ahrensfelder Chaussee (grammar school).

However, the predicted rush to the schools did not materialize; On the one hand, the families moved to other districts or left Berlin entirely, and on the other hand, the birth rate fell drastically compared to the values ​​from before 1989. While around 2,500 births were counted in 1987, the number fell to 537 in 1993, and in the following years it settled at around 800 per year. This population decline was now noticeable in the fact that there was no student surplus at the schools, but rather vacancies. As a solution, it was considered to merge individual schools and demolish the school buildings that are no longer needed. This process is still going on today. 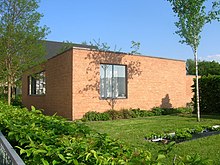 Hohenschönhausen has only a few sights well-known beyond the city limits. The village center along the main street has the oldest buildings with the Taborkirche , Hohenschönhausen Castle and the old town hall.

The Berlin-Hohenschönhausen memorial is located on Genslerstrasse south of the village center , and until 1989 the central remand prison of the MfS was housed here.

House Lemke in the villa district on Orankesee is of architectural importance , which was created in 1932 as the last design by Ludwig Mies van der Rohe before his emigration to the USA. Today there is an exhibition of modern art in the brick building, which has been renovated in accordance with the listed buildings. Next to the house was Erich Mielke's guest house and his son's former home.

The village Malchow takes place in the walking tour through Mark Brandenburg by Theodor Fontane mention.

The Tierheim Berlin , which opened in 2002, is often used as a backdrop for feature films because of its futuristic architecture.

Road traffic is mainly based on the historically grown streets, especially the main street , Konrad-Wolf-Straße , Falkenberger Chaussee and the streets connecting them. The network of public transport, especially the Berlin tram, is also geared towards this. The central points, and thus also those with the greatest load in rush hour traffic, are the section of Wartenberger Straße between Malchower Weg and Hauptstraße and the intersection at Prerower Platz.