Alfredo James "Al" Pacino (born April 25, 1940 in New York ) is an American actor , film director and film producer . For many critics and viewers, he is regarded as one of the outstanding character actors in contemporary American film and theater. He has appeared in numerous classic films since the 1970s.

In the course of his career he has received the Oscar , the Golden Globe Award , the Tony Award and the National Medal of Arts , among others . His best-known roles are that of Michael Corleone in The Godfather Trilogy, directed by Francis Ford Coppola , and as gangster Tony Montana in Scarface .

Al Pacino, born in Manhattan , is the son of Salvatore Pacino, born in the Sicilian city ​​of Corleone , and Rose Gerard, the daughter of an Italian immigrant and an Italian-American mother, who was born in New York. His parents divorced when he was two years old. After the divorce, Al and his mother moved to the Bronx , and Pacino grew up in New York's South Bronx with his Sicilian grandparents, who immigrated from his father's hometown .

His father Salvatore, who moved to Covina , worked as an insurance agent and owned a restaurant, "Pacino's Lounge". The Pacino's was in economically difficult times in the early 1990s closed; today it bears the name Citrus Grill. Salvatore Pacino died on January 1, 2005 at the age of 82.

Al Pacino is the stepson of the actress and makeup artist Katherin Kovin-Pacino and has four sisters: Josette, a teacher, the twins Roberta and Paula, and Desiree, who his father adopted in his fourth marriage.

At the age of 17 Pacino was expelled from school and from then on went to the Manhattan School of Performing Arts . He also worked in smaller theaters as an usher and ticket tearer.

Pacino was interested in acting as a child. He honed his talent at two renowned New York drama schools , in Herbert Berghof's HB Studio and later with Lee Strasberg in The Actors Studio . There he starred in several successful plays such as his debut play The Connection and The Indian Wants the Bronx , for which he was awarded an Obie Award. 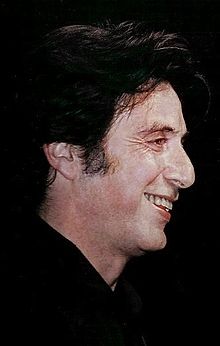 Pacino was discovered by the later film producer Martin Bregman during an off-Broadway appearance. In 1969 he worked in his first Hollywood production Me, Natalie . In 1971 he received a role alongside Kitty Winn in the film Panic in Needle Park, which paved the way for him to play the role of Michael Corleone in Francis Ford Coppola's The Godfather (1972) and which earned him his first Oscar nomination in 1973 .

After dog days it got quieter around Pacino. It wasn't until the 1980s that he got back into conversation with films like Brian De Palmas Scarface (1983) and Sea of ​​Love - Melodie des Todes (1989). After another collaboration with Coppola in The Godfather III (1990), the thriller Heat (1995) followed with fellow actor Robert De Niro . He turned down the male lead in the film Pretty Woman .

His portrayal of the AIDS- sick gay hater Roy Cohn in the miniseries Engel in Amerika (2003) earned him numerous awards and was highly praised by critics.

Pacino is known for filling his roles to the extreme. While his game in the 1970s - especially in The Godfather - was mostly minimalist and reserved, it changed radically with his comeback in the 1980s: Pacino's exalted portrayals in films like Scarface, On behalf of the devil , On every damn Sunday or and scent of a Woman was often by critics as overacting referred. For a large part of the audience, however, it is precisely this way that distinguishes him as one of the greatest character actors of the present. Many of his films, including Glengarry Glen Ross , which initially flopped, are now among the best in their genre.

In addition to his career as a film actor, he continues to work regularly in various theaters - both as an actor and as a director and producer. For his roles in the stage productions of David Rabe's The Basic Training Of Pavlo Hummel and Does A Tiger Wear A Necktie? from Don Petersen each received a Tony Award .

As a long-time member of David Wheeler's Experimental Theater Company in Boston, he was in Richard III. and Bertolt Brechts The resilient rise of Arturo Ui on stage. In New York and London Pacino played in David Mamet's American Buffalo , in New York he was the title character in Richard III. and played the Mark Antony in Julius Caesar . He also appeared in Oscar Wilde's Salome at the Square Theater in New York and appeared in the world premiere of Ira Levin's play Chinese Coffee . In the theater season 2010/2011 Pacino played in the Shakespeare in the Park production The Merchant of Venice to Shylock . With the production, Heather Lind , who appeared as Shylock's daughter Jessica , won a Theater World Award for an outstanding Broadway debut.

Pacino's first independent project was Looking for Richard in 1996 , a documentary and artistic film study about the character of Shakespeare's Richard III. , which he directed, produced, scripted and starred.

Pacino was also the producer, lead actor and co-writer of the independent short film The Local Stigmatic , a film adaptation of the Heathcote Williams play of the same name , which was shown at both the New York Museum of Modern Art and the Public Theater . 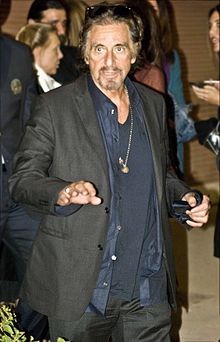 Al Pacino was never married. He has three children, a daughter with Jan Tarrant and twins (daughter and son, * 2001) with Beverly D'Angelo . He was in a relationship with Marthe Keller until the 1980s , with whom he lived for seven years.

Al Pacino has been dubbed by various German speakers over the decades. After he was usually spoken of by Lutz Mackensy in the first decade of his career (including Der Godfather I and II, Serpico, Hundstage ), Frank Glaubrecht took over the dubbing of the actor with Scarface (1983) . Glaubrecht has been the sole speaker since 1995 ( Heat, City Hall, Insomnia, etc.) and can now be described as Pacino's standard voice .