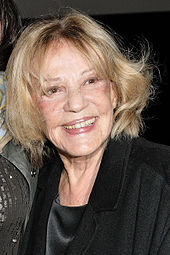 Jeanne Moreau (born January 23, 1928 in Paris ; † July 31, 2017 there ) was a French actress , film director and singer. She worked in over 120 film productions, was one of the most popular film stars of the Nouvelle Vague in the 1950s and 1960s and was considered one of the leading character actresses in France. Moreau was included in the category of belles laides , i.e. H. literally translated as 'ugly beauties', which convince not through superficial charms, but through the combination of sensuality and depth of character. She had one of her most famous roles in 1962 in the melancholy love triangle Jules and Jim . The timbre of her voice and her provocative and at the same time elegant gait were unmistakable.

The daughter of a British dancer and a French restaurateur studied at the Paris Conservatory from 1946 and continued her education from 1948 to 1952 at the Comédie-Française , where she got to know the high school of classical theater. Moreau soon proved herself as a sensitive, differentiated character actress, for example in the classic Le Cid by Pierre Corneille and in Prince Friedrich von Homburg by Heinrich von Kleist (both in 1951, alongside Gérard Philipe ). In 1952 she moved to the experimental Théâtre National Populaire by Jean Vilar , who also founded the renowned Avignon Festival , at which Moreau also performed. From the following year she was engaged on various stages and also played on Broadway . Moreau, who gained a reputation for being one of the best actresses of her generation in the 1950s, has been honored with numerous theater awards. Her acclaimed roles also include the heroines in George Bernard Shaw's Pygmalion and Jean Cocteau's The Infernal Machine (both in productions by Jean Marais , 1954).

In 1948, Moreau made her film debut. After minor roles such as in Jacques Becker's When It Gets Night in Paris (alongside Jean Gabin , 1953), she had her first major success with Louis Male's Elevator to the Scaffold (1957). With the controversial film Die Liebenden (1958), also directed by Louis Malle, she achieved her breakthrough to star. This was followed by numerous leading roles in French and international productions, including a. in films by Michelangelo Antonioni ( The Night ) , Orson Welles ( The Trial ) , Luis Buñuel ( Diary of a Chambermaid ) , François Truffaut ( The Bride Wore Black ) , Roger Vadim ( Dangerous Liaisons ) , Tony Richardson ( Mademoiselle ) and Peter Brook ( Moderato Cantabile) . She based her great, lasting fame mainly with the role of Catherine in the cult film Jules and Jim by François Truffaut (1962). She also made her directorial debut in 1976 with the film Lumière . The German directors Rainer Werner Fassbinder and Wim Wenders also engaged Moreau for their films Querelle (1982) and Bis ans Ende der Welt (1991).

She also returned to the stage again and again. In 1973 she shone in the Paris production of Der Ritt über den Bodensee by Peter Handke . With the one-person play Die Erzählung der Magd Zerline, based on a novella by Hermann Broch (staged by Klaus Michael Grüber ), she celebrated an almost triumphant success for several years in Paris and in numerous guest performances, including abroad.

Jeanne Moreau was married twice. Her first marriage (1949–1951) to the actor Jean-Louis Richard (1927–2012) was the result of her son Jérôme, who is now a successful painter. From 1977 to 1980, Moreau was married to director William Friedkin . An affair with the director Tony Richardson in 1967 led to his divorce from his wife Vanessa Redgrave . From 1966 onwards, Moreau was in a relationship with the fashion designer Pierre Cardin , whose creations she wore from then on.

Jeanne Moreau was also popular as a singer in France and was awarded the Grand Prix du Disque in 1964. Since 2000 she was also a member of the Académie des Beaux-Arts .

On the morning of July 31, 2017, Jeanne Moreau was found dead by her cleaning lady in the apartment on Square du Roule in Paris. She was buried on the Cimetière de Montmartre (Division 27).