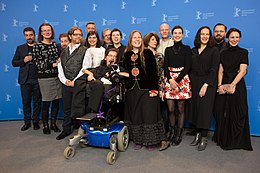 Cast & Crew at the Photo Call of the Berlinale

Touch Me Not (Engl., Don't touch me ) is a semi-documentary experimental film by Adina Pintilie from 2018 . The European co-production, the Romanian director's feature film debut , explores the varieties and limits of human sexuality .

The film, which received controversial criticism, premiered on February 22, 2018 in the competition at the 68th Berlin International Film Festival , where it was awarded the Golden Bear . The cinema release in Germany was November 1, 2018.

The semi-documentary film accompanies Laura, Tómas and Christian, who embark on a personal research project on the subject of intimacy with the director Adina Pintilie . Pintilie interviews the three over a screen in the form of therapy sessions, sometimes sits with them in front of the camera or swaps places with them.

The single Laura is 50 years old and is fighting against her asexuality . She then meets with different people to explore intimacy. She orders a Bulgarian call boy and watches him undress, shower and masturbate on her bed in her apartment . When he's gone, she puts her head on the spot where he was lying. Further meetings follow with the trans woman Hanna, who puts on a peep show for Laura , and with the sex therapist Seani Love, with whom she tries to allow contact and at the same time to give a valve to her pent-up anger. Laura visits an elderly man in the hospital several times and observes members of a touch therapy group.

Tómas and Christian take part in touch therapy in the hospital, in which they explore their bodies and intimacy with mutual touch. Tómas lost his hair at the age of 13. He suppressed his feelings for a long time. With the help of Christian, he becomes aware of this fact in the course of the therapy.

Christian is severely disabled and sits in a wheelchair. He sees himself as an attractive man. He wishes to take the active part in sex and sometimes he feels "like a brain to be carried around". He does the therapy together with his partner Grit.

Tómas begins to pursue his former lover Irmena, who works in a boutique. He follows her twice to a sex club, where the visitors sometimes indulge in SM games. The visitors also include Hanna, Christian and Grit. Laura begins to chase Tomas as well. Soon after, he notices her and speaks to her out of curiosity. Laura takes Tomas into her apartment. She wants him to see her naked. Tómas gets involved. Later they both lie naked in bed together and touch each other.

At the beginning and towards the end of the film, Adina Pintilie addresses an unnamed you from the off . She reports, among other things, of a dream in which she has sex with a man and suddenly she feels the presence of her mother. At the end of her experiment, she comes to the conclusion that the boundaries between intimacy, trust and pleasure have become increasingly blurred. The film ends with Laura, naked, dancing to wild music.

The director Adina Pintilie with the Golden Bear

Touch Me Not competed in the competition at the Berlinale 2018 , where the film with the Golden Bear won the festival's main prize. In addition, Pintilie's directorial work received the GWFF award for the best debut film. Her compatriot Călin Peter Netzer belonged to the three-person jury . Touch Me Not was also nominated for the Teddy Award .

Touch Me Not received 1.5 out of 4 possible stars in the international reviews of the British trade magazine Screen International and thus took third from last place of all Berlinale competition films. The award of the film with the main prize at the Berlinale was considered a big surprise by the German-speaking media. The German jury president Tom Tykwer had missed "wild and bulky films" in Germany in an interview before the festival began. “We have found out that we don't just want to appreciate what cinema can do, but also what it can still go to,” said Tykwer on behalf of the jury before the award ceremony.

The Tagesspiegel described the film as "the most radical, most controversial films of the competition", while the German wave Pintilie directing as "spectacular contribution also to #MeToo praised debate" about power abuse and sexual violence in the entertainment industry. Hanns-Georg Rodek ( Die Welt ) described the award as a “shock decision” and compared it with the controversial award from Reinhard Hauff's film Stammheim at the 1986 Berlinale . The Rolling Stone tried to summarize the negative reviews, and described Touch Me Not with "cinema as therapy hour"; According to critics, it is a "distant film that reproduces sex as a brittle act without eroticism".

Commons : Touch Me Not  - collection of pictures, videos and audio files