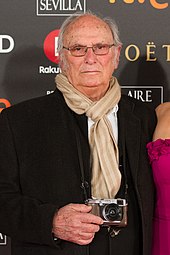 Carlos Saura (born January 4, 1932 in Huesca , Aragón ) is a Spanish film director . His films were initially shaped by neorealism , later the influence showed through the mythical style of Luis Buñuel .

Saura's father was employed in the Treasury, his mother was a pianist , and his brother Antonio Saura later became a well-known artist. During the Spanish Civil War , the Republican family moved first from Madrid to Valencia , and later to Barcelona . After the war, Saura was separated from his family for a while and stayed with relatives who sympathized with Franco . These experiences were formative for his later filmmaking. In an interview in 1975 he confessed: "I have never been able to understand why overnight the good guys were the bad guys and the bad guys the good guys."

Saura first studied engineering and earned his living as a photographer at dance events. But he also made artistic photographic works, which he exhibited with the help of his brother Antonio. In 1952 Saura was a student at the Instituto de Investigaciones y Experiencias Cinematográficas (IIEC), the Spanish state film school, where he studied directing. In 1957 he received his diploma for La tarde del domingo (1957). The film doesn't have a happy ending, which is typical for Saura.

Immediately after graduating, he became a lecturer at the IIEC, initially for the scenario / screenplay department, and later for directing. In 1959 he directed his first full-length feature film Los golfos (German: The Street Boys ). During the screening of the film at the Cannes Film Festival in 1960, Saura met his colleague Luis Buñuel , with whom he had a close friendship and the stylistic closeness of their films. The Spanish film censorship severely restricted the distribution of Los golfos . A cut version was not premiered until 1962. Saura made it his business to criticize the authoritarian Franco regime in his films. The state censorship forced him to a subliminal and not directly tangible criticism, which soon made him the figurehead of anti-French art. He was supported by his friend and longtime producer Elías Querejeta . At that time, Saura's films were better known at international film festivals than in Spain itself.

The Spanish bourgeoisie served Carlos Saura as a reflection of Spanish society. In La Caza (1965, German: Die Jagd ) he showed the bourgeois behavior of a hunting party. In La prima Angélica (1973, German: Cousin Angélica ), a middle-class family became a mirror of the frozen Spanish society. Again and again he had to wrestle with the censors over individual scenes full of symbolism, for example when in La prima Angélica the splinted arm of a Falangist reminds of a Hitler salute. Even after the censorship was in place, the Spanish screenings of this film were attacked by Falangist thugs. Carlos Saura commented on his 1972 film Ana y los lobos (German: Anna and the Wolves ): “I made this film because my mother always said when I wanted to talk about political, sexual or religious problems at home: You don't talk about that. The Spanish censors then said the same to me: Everything you want - except sex, politics and religion! "

Saura's cinema from this phase was often referred to as "memory cinema". It was partly autobiographical . In the film La prima Angélica, for example, film sequences are mounted that go back to Saura's perception as a child during the war, such as the scene of a girl with broken glass on her face. La Madriguera (1968, German: Cave of Memories ) shows the virulence of unprocessed, sometimes traumatic childhood experiences in a later partner relationship. Saura herself said in an interview: "My films are never realistic, rather a kind of escape, in the sense, as Luis Buñuel said: The purest is the imagination." One of the most important artistic points of reference in Saura's films was Geraldine Chaplin , who used to Saura's partner was during their work together. In a total of nine of his films from Peppermint Frappé (1967, German: Pfefferminz Frappe ) to Mamá cumple cien años (1979, German: Mama turns 100 ), she worked as an actress, mostly in the female lead. In Cría cuervos (1975, German: Breed ravens ... ) she appeared in a dual role as mother and adult daughter. The film became Saura's greatest success to date and, with over a million viewers, reached a large Spanish audience for the first time.

After Franco's death and the disappearance of censorship, the subject of Saura's films opened up. His work ranged from the time-critical study of criminal youths Deprisa, deprisa (1981, German: Los, Tempo! ) To the surreal imagery of the historical artist portrait Goya en Burdeo (1999, German: Goya ). Above all, his dance films , in which Saura's experience as a dance photographer came into play, became internationally known . With Bodas de sangre (1981, German: Blood Wedding , based on the play of the same name by Federico García Lorca ), Carmen (1983, based on the opera of the same name by Georges Bizet ) and El amor brujo (1986, German: love magic , based on the ballet of the same name by Manuel de Falla ), he presented his first trilogy dedicated to flamenco in the 1980s . Another trilogy explored modern urban music styles with Flamenco (1995), Tango (1998) and Fados (2007).

He was also honored in his homeland after the democratization of Spain . In 1980 he was awarded the Spanish National Film Prize “in recognition of his work for the reputation of our cinema abroad”. For ¡Ay, Carmela! (1990, German: Ay Carmela! - Song of Freedom ) In 1991 he received the Spanish Goya film award in the most important categories. In 1992 Saura produced the official film for the Summer Olympics in Barcelona with Maratón .

In 2000 Saura found her way back to the subject of the Spanish Civil War, but this time not behind the camera, but in his first novel ¡Esa Luz! (German: This light! ) by creating a literary film in the reader's mind. Carlos Saura sees himself in the tradition of three great directors: “Buñuel, Bergman and Fellini ”.