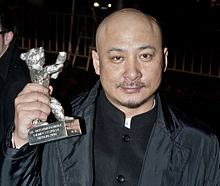 Wang originally wanted to be a painter as a child, then worked as a dancer before enrolling in acting at the Beijing Film School in 1987 . After completing his studies, he worked for the Chinese film studio Xi'an from 1991 and wrote film scenarios on the side. His debut film Yue Shi , made in 1999 , won several awards and was shown at the Berlinale in 2002. His second work Jing Zhe was also shown at the 2004 Berlinale. However, both films were not contest entries. His film Tuya's Wedding (Tuya de hunshi) then ran in competition in 2007 and received the Golden Bear at the 57th Berlin International Film Festival .

Three years later he received another invitation for Tuan Yuan (English-language festival title: Apart Together ) to compete at the 60th Berlin Film Festival in 2010. The drama, which is about a Chinese who fled to Taiwan and meets his lover again after decades, opened it up Film festival. Wang and his co-writer Jin Na (金娜) received the Silver Bear for best screenplay for this film.

In 2012, the historical film Bai lu yuan brought Wang the third invitation to the Berlinale competition . The cameraman Lutz Reitemeier was awarded a Silver Bear for outstanding artistic achievement.

Wang has worked with Reitemeier since his film Jing Zhe . The two met in Berlin in 2002.

He was arrested in mid-September 2014, allegedly accompanied by a prostitute. This is seen by observers as a tougher course by the government.