The Golden Glove is a German - French film drama by Fatih Akin about the murderer Fritz Honka from the Hamburg neighborhood of the 1970s. The film is based on a novel of the same name by Heinz Strunk and celebrated its premiere on February 9, 2019 at the Berlin International Film Festival , where it was shown in the main competition. The cinema release in Germany was on February 21, 2019.

Hamburg-St. Pauli , 1970: The unskilled worker Fritz Honka mostly spends his evenings in the “ Zum Goldenen Handschuh ” neighborhood bar . With his deformed face, his glasses with checkout racks , his strong squint and his saxon, "Fiete" is considered harmless and shy there. He lets his innkeeper address older, lonely women and invites them to drink alcoholic beverages. One day when he takes a woman into his small attic apartment with numerous pin-up pictures for sex , he kills her. In order not to arouse suspicion in the house, Honka dismembered the corpse and places some parts in the area. In his later crimes, he deposited the dismembered body parts behind the paneling below the sloping roof. He tries to cover up the smell of putrefaction with miracle trees . In relation to his guests, he always blames the cooking skills of the Greek guest worker family living below him for the penetrating stench.

Four years later, Honka takes Gerda, an elderly woman from Vienna, home with her from the pub. When he does not get an erection due to his massive alcoholism, he penetrates her with a wooden spoon. The next day after returning home from work, Gerda still has not left his apartment. He beats her out of anger, but lets her stay with him after discovering that she has cleaned up the apartment. Honka forces Gerda to humiliating sexual intercourse and draws up a contract to keep her as a slave. She is also supposed to bring her 30-year-old daughter Rosi to him. At the same time, Honka likes the fact that Gerda calls him the “boss”. In addition to her and his drinking buddies, the only person he can relate to is his brother Siggi, who has also been inclined to alcohol since a separation. Gerda leaves Honka when, after the numerous humiliations one day, she is taken in the Golden Glove by Gisela, a major of the Salvation Army, who promises her a better life. Angry, he takes the older Anna and Inge home with him. While Honka tries to force Inge to have sex, she escapes. He then kills Anna, who is still in his apartment.

When Honka is hit by a car, he plans a fresh start without alcohol. He becomes a night watchman in an office complex and meets the younger cleaning lady Helga Denningsen and her husband Erich. Thanks to Helga, with whom he falls in love, Honka starts drinking again. An attempt at rape fails because of her resistance. One of Honka's last victims becomes a former forced prostitute and a concentration camp inmate. He abuses her when he can't get an erection. She then takes revenge on him by putting mustard on his penis while he sleeps. When she tries to steal money from Honka, he chokes her unconscious and kills her with several liquor bottles. The attempt to stalk the attractive student Petra fails when a fire breaks out in his house. Maggots had previously penetrated through the ceiling to the Greek neighbors, who then fled the apartment and left the stove on. The fire brigade found body parts while the fire was being extinguished and Fritz Honka was arrested by the police on site, despite his attempt to escape. 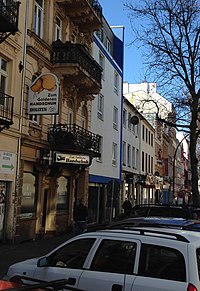 The entrance to the pub "Zum Goldenen Handschuh" on St. Pauli 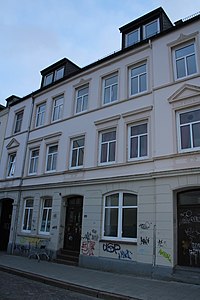 The house Fritz Honka in Zeißstraße 74

The film is based on the novel The Golden Glove by Heinz Strunk . In it he describes the deeds of the serial killer Fritz Honka , who found his victims in the district around Hamburg's Reeperbahn and there, among other things, in the pub "Zum Goldenen Handschuh". At the end of September 2016, Strunk was awarded the Wilhelm Raabe Literature Prize for his novel . It was directed by Fatih Akin , who also adapted Strunk's novel for the film. The film is Akin's first foray into the horror genre. Nurhan Şekerci-Porst is the producer , with whom Akin has already realized Out of Nowhere .

Akin says he liked the book that Strunk managed to give both the victims and Fritz Honka dignity: “Honka is not a serial killer for me like Hannibal Lecter from The Silence of the Lambs . He murders in the USA and is only a fictional character anyway. Honka was a real person from my neighborhood. "He was a fear figure of his childhood and he always needs personal access to a substance, Akin continues.

The crime writer Simone Buchholz thinks that Honka made a similar impression on St. Pauli as Jack the Ripper in London. As soon as the first rumors surfaced that Fatih Akin would take care of the material, St. Pauli was quite excited, especially because Akin grew up in Altona and is therefore a boy from the neighborhood, explains Buchholz.

The main role of Fritz Honka was cast with the actor Jonas Dassler . During the filming, Dassler wore a contact lens that was made in London and instead of the iris showed a painted glass body with which Honka's strong squint was to be represented. In this way, a figure in the tradition of Victor Hugo's The Hunchback of Notre-Dame was created, according to Fatih Akin. Dassler says about his portrayal of Honka: “The guiding principle for me was that there was someone who was actually looking for a normality, for a bourgeoisie. And unfortunately the way to get there also went through these murders. That there was a frustration about oneself that broke out. ” Lars Nagel , Uwe Rohde , Dirk Böhling and Philipp Baltus can also be seen in other roles, as well as Ohnsorg legend Herma Koehn , Tristan Göbel (the main actor from Akin's“ Tschick ”) and Greta Sophie Schmidt .

On July 2, 2018, filming began on St. Pauli, where recordings were made around the “Zum Goldenen Handschuh” pub that can only be seen from the outside. The pub was also recreated on a 1: 1 scale. The film sets were set up in the halls of the former Überseezentrum in Hamburg-Mitte. Honka's apartment was also reconstructed here. For their designs, production designer Tamo Kunz and art director Seth Turner were also able to use police photos and props from the police museum that were created after Honka's arrest. In the credits you can see photos of crime scene sketches, clothing of the victims and the "fox tail", Honka's alleged instrument. After every murder committed by Honka, Kunz tightened the walls a little. In August 2018, among other things, the St Joseph Church was shot . Originally 31 days of shooting were scheduled, which were then extended to 33. Rainer Klausmann acted as cameraman .

Two first trailers of different lengths were presented in mid-January 2019. The film celebrated its premiere on February 9, 2019 as part of the Berlin International Film Festival , where it was shown in the main competition. There the film was shown with audio description . It was released in German cinemas on February 21, 2019. In September 2019 it was shown at the Fantastic Fest in Austin.

In Germany, the film was not approved for young people by the FSK . Gaby Sikorski from the Kino Arbeitsgemeinschaft Kino explains that although the film largely dispenses with splatter effects or violent scenes on display , and most of it happens outside of the camera's direct field of vision, it still gets bloody: “When we look at it, dislike predominates and disgust instead of fear. "

Jonas Dassler , here at the Berlinale in 2019, plays Fritz Honka in the film

The Golden Glove received 1.9 out of four possible stars in the international reviews of the British trade magazine Screen International and thus, together with the Scandinavian contribution Stealing Horses (Ut og stjæle hester) by Hans Petter Moland, took 12th place among all 16 Berlinale competition films. Emin Alpers A Story of Three Sisters and Nadav Lapid's Synonymes (3.0 each) topped the ranking.

Fabian Wallmeier from the RBB writes that in his attempt to give both Fritz Honka's victims and the murderer himself at least one last piece of dignity, Fatih Akin crashed. Where Heinz Strunk reports clearly and sensitively, Akin penetrates to the max: "The world he brings to the screen is a joke, an absurd grotesque that does not shy away from any display." year old Jonas Dassler created a grotesque mixture of Nosferatu , David Lynch's Der Elefantenmensch and Horst Schlämmer with a lot of mask spatula . Wallmeier sums up that the film is miles away from the sensitive and sober novel, and Akin shows no sense of nuances, but rather feasts on disgust and misery.

Frank Junghänel from the Berliner Zeitung explains Akin was chosen as the form of a kind of theater aesthetics, and Honka's flophouse appearing as a stage on which a bestial roof intimate play occurred.

Variety's Guy Lodge refers in his review to the biopic Extremely Wicked, Shockingly Evil and Vile about Ted Bundy , which also raised the question of where the line lies between the pure portrayal and the celebration of a serial killer. The Golden Glove is neither psychologically informative as a study of violent masculinity, nor is the film particularly informative as a report on a depraved life. The viewer has to grapple the whole time with the uncertainty of which unhappy woman will be dismembered next and at the same time impose an empathy with a psychopath who hardly seems worth such a complex investment. On a positive note, Lodge notes that you can practically smell the human flesh that is rotting on the canvas.

Deborah Young from The Hollywood Reporter also notices Rainer Klausmann's grainy pictures, the battered attic apartment and the work of production designer Tamo Kunz , who created such an extraordinarily detailed film set here that you can literally smell it. Overall, however, the film moves uncertainly between a horror film and German, black humor, which is reminiscent of Rainer Werner Fassbinder , if he had only a little sympathy for those who suffer, so Young.

Brigitte Häring on SRF analyzes: “The film is also disgusting on a second level. He takes Honka's demeanor and is terrifyingly misogynistic. All Honka's victims remain nameless and contourless. Women are only reduced to being stubborn drinkers, ugly prostitutes. They remain clichés. ”She also points out that Akin invented the figure of a“ picture-perfect, very young woman ”as a fantasy object for Honka, although the latter stated in the process that he was attracted to older women. Häring sees "the real victims even more devalued, namely (...) by the screenwriter and director Fatih Akin."

Alice Schwarzer also problematizes Akin's identification with the perpetrator: "As a motive for the selection of his material, Akin stated in an interview with Spiegel that he was“ closer to the losers ”. He was not referring to Ruth Schult. Not even Gertrud Breuer or Anna Beuschel Neither did Frieda Roblick, who survived the concentration camp but not Honka. Akin was referring to the sadistic female murderer. " And she suggests: "When does a writer actually write a book about these four women - or one of them? And when does a director make a film about her life?

For the soundtrack, mainly sentimental hits from the early 1970s were used, which are played by the jukebox in the bar scenes . These are among others:

The song “We are young, we are free” by Stein Ingebrigtsen was used for the credits .

Sensin - it's you! | Turked | Short and painless | In July | I think of Germany ... - We forgot to return | Solino | Against the wall | European visions | Crossing The Bridge - The Sound of Istanbul | On the other hand | Germany 09 | Soul Kitchen | New York, I Love You | Garbage in the Garden of Eden | The Cut | Tschick | Out of nowhere | The golden glove