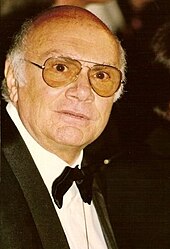 Francesco Rosi at the Cannes International Film Festival in the 1990s

Francesco Rosi (born November 15, 1922 in Naples , † January 10, 2015 in Rome ) was an Italian film director and screenwriter . Between the 1950s and 1990s he made 20 feature and documentary films. At the beginning of the 1960s, Rosi acquired himself through his neorealist works Who shot Salvatore G.? and hands over the city the reputation of a specialist in Mafia films before he broke with his film style in the late 1970s and the poetic literary film Christ came only until Eboli presented it. In his career, Rosi has received more than 30 international film and festival awards, including the Palme d'Or at the Cannes Film Festival , the Golden Lion of the Venice Film Festival and a British Academy Film Award .

Rosi grew up in a middle-class family and was introduced to the cinema at a young age by his father, who worked for a shipping company and was himself a hobby photographer. Although he with a film studies at the Roman Centro Sperimentale di Cinematografia had flirted (CSC), he enrolled at the request of his father at the University of Law a. The Second World War interrupted Rosi's education. He was drafted and served in Tuscany . Back in his hometown of Naples, he continued his studies, but from 1944 devoted himself to work as a journalist for Radio Naples. Two years later, in 1946, the Italian held a position as assistant director at the Quirino Theater in Rome and worked as a writer and actor in the revue E lui dice .

While Rosi was preparing to study film at the CSC , he received a post as assistant director to Luchino Visconti and worked on his production Die Erde quebbe (1948), which is now one of the most important works of Italian neorealism . Rosi then gained further experience as an assistant director at Visconti ( Bellissima , 1951; Sehnsucht , 1954), Luciano Emmer ( A Sunday in August , 1950; Parigi è semper Parigi , 1951; Bigamy is no pleasure , 1956), Michelangelo Antonioni ( Children of Our Time , 1953) and Mario Monicelli ( Verboten , 1956), worked as a screenwriter and devoted himself to his first directorial work together with Goffredo Alessandrini ( Anita Garibaldi , 1952) and the actor Vittorio Gassman ( Kean , 1956). He made his first own feature film, The Challenge , in 1958, in which the Spanish actor José Suárez appears as an ambitious cigarette smuggler who, with the help of the mafia, wants to usurp the Neapolitan fruit and vegetable markets. The film in which Rosi, like Visconti and Monicelli, relied on amateur actors, brought him first success on the part of the critics and he gained a reputation as a specialist in Mafia films with a socially critical background, which he shot through Who shot Salvatore G.? (1962) underlined. This marks his international breakthrough and brought him the directing awards of the Sindacato Nazionale Giornalisti Cinematografici Italiani (SNGCI) and the Berlin Film Festival . Rosi received the Golden Lion of the Venice Film Festival for Hands over the City (1963), which deals with corrupt land and building speculation in a major Italian city, and the main prize in Cannes for The Mattei Case (1972), a study about the controversial Italian industrialist Enrico Mattei , who died in a mysterious plane crash in 1962.

From the mid-1970s, Rosi turned to poetic cinema and the literary film Christ came only to Eboli (1979) about Benito Mussolini's Italy , the Oscar- nominated family drama Three Brothers with Philippe Noiret , Michele Placido and Vittorio Mezzogiorno in the title roles and the film adaptation of the opera Carmen with Julia Migenes and Plácido Domingo , for which Rosi was again acclaimed by international critics and with which David di Donatello was recognized as the best Italian director. A failure, however, was the international production Chronicle of a Death Announced (1987) after Gabriel García Márquez with Rupert Everett and Ornella Muti in the lead roles, before he returned to the Mafia film with Palermo Forget . Rosi's last directorial work is the adaptation of Atempause (1997) based on Primo Levi's autobiography, which documents the journey home of an Auschwitz survivor (played by John Turturro ) to Italy. In the same year he was on the international jury of the Venice Film Festival, while in 2002 the German Eckhart Schmidt dedicated the portrait of Francesco Rosi - Moments of Truth to him.

Together with his wife Giancarla, Rosi had a daughter, Carolina Rosi , who is an actress. The director and screenwriter was honored with an honorary award for his cinematic work at the David di Donatello awards ceremony in 2006, after having received the directing award five times in the past. At the 2008 Berlin Film Festival , Rosi was honored with the Honorary Golden Bear and a cinematic homage. In 2012 he was honored with the Golden Lion for life's work at the 69th edition of the Venice International Film Festival . This honor went hand in hand with a showing of Rosi's film The Mattei Case , which was restored by Martin Scorsese's Film Foundation .