The title of this article is ambiguous. Further meanings are listed under Pippi Longstocking (disambiguation) .

Pippi Longstocking (with full name Pippilotta Viktualia Rollgardina peppermint Efraim's daughter Longstocking , original Swedish name : Pippilotta Viktualia Rullgardina Krusmynta Efraimsdotter Långstrump ) is the central figure of a three-volume Swedish children's book series based on it by Astrid Lindgren and various adaptations. In a television series , peppermint is replaced by chocolate in her name .

Pippi is a confident nine-year-old girl with freckles, whose red hair is braided into two protruding braids . It combines many qualities that children long for. She has her own horse and monkey, lives alone in her own house and is very brave. Pippi is also the strongest girl in the world. When the two of them meet, she competes with her father in various tests of strength and, for example, lifts up her horse at a party, on which her friends Tommy and Annika are sitting. Another time she defeats a wrestler in the circus. Since Pippi lives alone without parents, she can do whatever she wants. Because she has a suitcase full of gold pieces, she is also completely independent materially.

Pippi likes to tell extraordinary incidents that she wants to have experienced on her travels with her father and with which she often explains her inappropriate behavior. So in Egypt all people should walk backwards and in back India even on their hands. However, as she sometimes admits, these bizarre stories stem from her vivid imagination. Pippi often gets into conflict with adults - for example, she resists two policemen who want to take her to a children's home - and regularly causes chaos: during an invitation to a coffee party, she sprinkles sugar on the floor, walks barefoot over it and dips her face into the cake . But she always remains friendly, uses her superhuman strength only in emergencies and very carefully against others and shows a mature, child-untypical sense of responsibility.

The book appeared after “Britt-Mari eases her heart” (Britt-Mari lättar sitt hjärta, 1944) as the second published work by Lindgren, at the same time as “Kerstin and I” (Kerstin och jag) in 1945. It was translated into 77 languages ​​and ( by 2015) distributed in 66 million copies. From the late 1960s, the Pippi Longstocking books were filmed with Inger Nilsson , the films were dubbed in several languages. 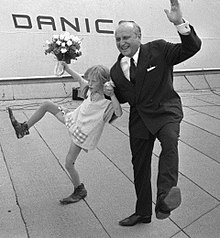 Inger Nilsson with the shipowner Sten A. Olsson in front of the Stena Danica , 1969

Astrid Lindgren wrote in her childhood autobiography , The Vanished Land , that her then seven-year-old daughter Karin invented the name of the character Pippi Longstocking in the winter of 1941. The girl, who often came up with names, lay in bed with pneumonia and asked her mother: “Tell me something about Pippi Longstocking.” Astrid Lindgren, who originally had no intention of becoming a writer, wrote the story down in March 1944 when she had to lie down herself due to a sprained foot. For Karin's tenth birthday on May 21, 1944, she gave her the manuscript.

She sent the copy of the manuscript to the Swedish publisher Bonnier , which refused to publish it. After she won second prize in a competition organized by the Rabén & Sjögren publishing house in 1944 with her book Britt-Mari eases her heart ( Britt-Mari lättar sitt hjärta ) , she revised the text by Pippi Longstocking and thus won another publisher's competition in 1945 . He accepted the book on September 13, 1945 for publication, which took place on November 26, and later published many other works by Lindgren. The first Pippi drawing was created by the author herself. Ingrid Vang Nyman created the illustrations . The first German Pippi Longstocking book was later illustrated by Walter Scharnweber .

The manuscript of the original text was published in 2007 on the occasion of the author's hundredth birthday under the title Ur-Pippi . 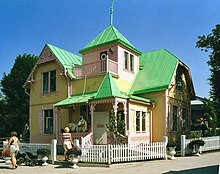 Pippi Longstocking lives with her monkey (in the film: squirrel monkeys ) Mr. Nilsson and her dapple gray (in the film is the horse Little Uncle , Swedish nickname lilla gubben , which roughly means "little guy") in the Villa Villekulla (Swedish: Villa Villekulla ) on the outskirts of a small, nameless town. According to her account, her mother is dead and her father is king on a South Sea island . The two children Thomas (in the original and more recent translations Tommy) and Annika Settergren, who accompany Pippi on her adventures, live in their neighborhood.

The book has eleven chapters; each contains one or two independent adventures. The events are taken from the world of children, but end in an unusual way because of Pippi's unconventional nature and her enormous strength.

Pippi Longstocking goes on board

As in the first book, the nine chapters are very independent and only loosely related. The world becomes more exotic through the visit of the father, because he really became king on a South Sea island.

After Pippi has found her father again, she wants to go on a long journey with him. But for that she would have to leave Tommy and Annika. Your best friends are deeply saddened by the imminent breakup. Pippi decides to stay with them and disembark again. Then the three children can experience new adventures again.

In the first four of the eleven chapters of the book, Pippi continues to make the adult world unsafe in her city until she receives a letter from her father. He asks her to come to him on the island of Taka-Tuka-Land (Swedish: Kurreurreduttö ). There she has a lot of fun together with Tommy, Annika and the children there. Only a shark and two pirates cause trouble. In the last chapter she is back in the Villa Kunterbunt and fulfills a dream, Tommy and Annika: The magic pill Krummelus (Swedish: Krumelur ) against growing up.

Apart from the three original books, Lindgren wrote the text for three picture books about Pippi, which were also illustrated by Ingrid Vang Nyman . There are also a large number of picture books, the text of which only consists of chapter excerpts from the novels.

The Swedish audio book version was spoken by Lindgren himself.

The film adaptation by Olle Hellbom with actress Inger Nilsson in the leading role implements the novel consistently. These films had such a lasting impact on the image of Pippi that some changes were wrongly attributed to the original. The name of the horse ( little uncle ) and the genus of Mr. Nilsson ( squirrel monkey ) are particularly striking here. In addition, Pippi has the first name Schokominza instead of peppermint.

The film adaptation of Pippi in Taka-Tuka-Land breaks away from the literature and tells its own story. The trip to the South Seas and the confrontation with the pirates are emphasized here, whereas the book, like the first two volumes, strings several episodes together.

There are other edits to the template; none of them could match the success of these films. Astrid Lindgren agreed to the production of an animated series in the 1990s.

"Pippi" in West and East Germany

In 1949 Friedrich Oetinger traveled to Stockholm with special permission from the British military government to speak to Lindgren about the rights to the children's book Pippi Longstocking. He then published the book in West Germany, although at that time it was still quite controversial even in Sweden and had previously been rejected by five other German publishers. Since Oetinger later also published all other Lindgren books, the publishing house pioneered Scandinavian children's literature in the Federal Republic of Germany . The German editions of her works are still published by Friedrich Oetinger Verlag today .

Only four Lindgren books were published in the GDR , all of them by Kinderbuchverlag Berlin : 1960 Mio, mein Mio , 1971 Lillebror and Karlsson vom Dach , 1975 Pippi Longstocking and 1988 Ronja the robber's daughter . These printed matter were very simple in terms of equipment, sometimes only paperback and always with their own illustration. As far as is known, there was only one edition. After 1989 the Pippi books - as well as the other titles by Lindgren - were also available in the east, which was initially met with great demand.

Like most of her other stories, the stories are based in part on Astrid Lindgren's own experiences or the stories she heard as a child. The game “Don't touch the ground” that Pippi plays with Tommy and Annika one day is a game from Lindgren's own childhood.

The lemonade tree, in which Pippi, Tommy and Annika find lemonade, is based on a tree from Astrid Lindgren's childhood, an old elm on Näs, which Lindgren and her siblings called "owl tree".

Pippi's freckles and red hair came from a friend of Lindgren's daughter Karin. In addition, a young girl lived in Furusund during the summer, where the Ericsson family's summer house was located. This one had a horse that was tied to the porch like Pippi's little uncle .

Pippi Longstocking is considered a literary role model for the women's movement and feminism , as it shows, contrary to traditional role models, a girl who breaks with her socially prescribed gender role and is "strong, daring, uninhibited, funny, rebellious and unimpressed by authorities". The book "encouraged generations of girls to have fun and to believe in their own abilities."

Due to the rebellious and non-conformist behavior of Pippi and her dealings with authorities, she is sometimes ascribed anarchist traits, and accordingly she is also a point of reference for anarchist currents. “A snotty brat in a rag look with scarlet braids who lives in a dilapidated villa and ignores all authorities! Pippi is an autonomous and anarchist long before the year 1968 got any meaning; She is also referred to as the inventor of punk - 40 years before the Sex Pistols . "

Since the 1970s there have been accusations of racism because of the depiction of blacks in children's books, including against Pippi Longstocking. The fact that black children throw themselves at Pippi's feet during a visit to Africa was interpreted as a colonial manner - although Pippi immediately stopped this kind of worship by throwing herself on the floor and declaring the whole thing to be a game. In 2009 the text of the German edition was revised and the terms “ Neger ” and “ Gypsy ” were removed. Pippi's father was renamed South Sea King by the Negro king of the original 1945 edition . In a survey by the Institute for Allensbach for the Frankfurter Allgemeine Zeitung in May 2019 75% of respondents were in favor of retaining the original version cannibal king . In the GDR the term had already been replaced by the king of the Takatukans . Astrid Lindgren had forbidden such processing during her lifetime.

After Pippi Longstocking has already served as a motif on many postage stamps, she has been featured next to Astrid Lindgren on the Swedish 20 kroner banknote since October 2015.

On June 13, 2001, a surcharge stamp of the Deutsche Post from the series For the Young appeared at the value of 100 + 50 Pfennigs / 0.51 + 0.26 € with a picture of Pippi Longstocking. With the Inception 5 December 2019 which gave German Post AG in the series childhood heroes a postage stamp in the denomination out of 80 euro cents with the image of Pippi with her horse. The design comes from the graphic designer Jennifer Dengler from Bonn.