The squirrel monkeys or squirrel monkeys ( Saimiri ) are a genus of primate from the Capuchin family . These relatively small primates are native to Central and South America and live in large groups.

Squirrel monkeys reach a head body length of 26 to 36 centimeters, in addition there is a 35 to 43 centimeter long tail. The weight is 700 to 1100 grams, with the males being significantly larger and heavier than the females. These primates get their name from the mask-like face drawing with the black snout. Their fur is dense and short, their back is green, brownish or gray, depending on the species, and their belly is white or light gray. The forearms, lower legs and paws are often orange-yellow in color. The cap on the top of the head is gray-green or black and in some species can also be sex-dimorphic in color.

The hind legs are long, the tibia and fibula often grown together at the lower end. The fingers are very short, the thumb cannot be opposed . The tail is still graspable in young animals, but no longer in adult animals.

The back of the head is elongated, the eye sockets are so close together that there is a hole in the bony wall between the eye sockets, the interorbital window. The area around the muzzle is hairless, the nostrils are on the outside of the nose. The molars have sharp cusps, an adaptation to the food, which is partly made up of insects. 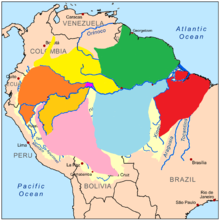 The distribution areas of the squirrel monkey in the Amazon basin.

Squirrel monkeys are mainly native to the Amazon basin in central South America. Their distribution area extends from southern Colombia and French Guiana to Bolivia and central Brazil . There is also an isolated population in Central America, the Central American squirrel monkey . Their habitat are various forest forms, but they are often found in temporarily flooded river forests and secondary forests .

Squirrel monkeys are diurnal tree dwellers who tend to be in the lower tree regions. They usually move on all fours and use the tail for balance, they are very quick and dexterous. They owe their English name to squirrel monkeys to these nimble movements . H. "Squirrel Monkey".

They live in groups of 12 to over 100 animals. Groups are made up of numerous males and females as well as the common young animals. They have an unusual social structure for monkeys: The group is built around the females, who develop a fixed hierarchy. The males are often only on the edge of the group. The group members communicate by whistling and chuckling. The grazing areas are relatively long, the areas of individual groups can overlap.

Squirrel monkeys mainly feed on insects and fruits, the proportion of which can vary depending on the season. Hunting insects takes up most of the day (up to 50% of the day), eating the fruit only around 10%. They also eat other parts of the plant such as nectar, flowers, buds and leaves as well as eggs and small vertebrates.

Reproduction is seasonal and the breeding period is relatively short. During this time, the males become significantly more aggressive and gain up to 20% in weight. Often, very few males father most of the pups in the group, usually the ones that have put on the most weight. The gestation period is around 150 to 170 days, the births are often synchronized within a group and take place within a few days.

Young animals are relatively heavy at 100 grams. The mother and other females from the group look after the young animals, but the fathers hardly care. After a few months the young will be weaned.

They are sexually mature at around 3 (females) and 5 (males) years. They can live to be over 30 years old in captivity.

The zoo has contributed to the worldwide popularity of the squirrel monkey. Numerous squirrel monkeys were caught and used as pets or in animal experiments up until the 1970s . These practices have declined significantly, although squirrel monkeys are still hunted for their meat in some places. In addition, they are affected by the ongoing deforestation. The Central American and the dark squirrel monkey, both of which are listed by the IUCN as endangered ( vulnerable ), deserve special attention .

The monkey , which is a companion to Pippi Longstocking in Astrid Lindgren's books , was replaced by a squirrel monkey in the films.

The squirrel monkeys, together with the capuchin monkeys, make up the family of capuchin-like (Cebidae). The marmosets used to be included in this group, for example in Groves' depiction of the primates in Mammal Species of the World from 2005.

The division of the genus Saimiri into species and subspecies is subject to constant change due to recent studies and findings in the fields of animal geography and phylogenetics. In the past, according to Hershkovitz, they were grouped into two species groups: In the sciureus group, which is named after the common squirrel monkey ( Saimiri sciureus ), the white portion above the eye was described as being raised (" Gothic type"). This feature was contrasted with the white portion above the eyes in the Bolivian squirrel monkey , whose face mask was considered to be rounded (" Romanesque type"). The group of species with similar characteristics was called the boliviensis group. However, this subdivision had to be abandoned because the sciureus group could not be represented monophyletically . Long regarded as a subspecies of the common squirrel monkey, the Collins squirrel monkey is closely related to the Central American squirrel monkey ( Saimiri oerstedii ), which originally belonged to the boliviensis group.

An early relative of the ancestors of all today's squirrel monkeys is the genus Neosaimiri , which is around 12 to 13 million years old and is fossilized from Colombia .

The strong fragmentation in squirrel monkeys into eight species is not supported by all scientists. Ruiz-García and colleagues criticize the fragmentation and instead suggest the following species classification:

Alternatively, the common squirrel monkey could be divided into three subspecies