The title of this article is ambiguous. Further meanings are listed under Bonnier (disambiguation) . 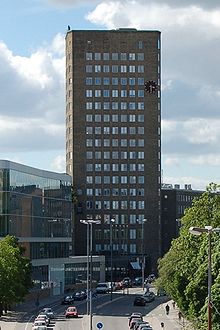 Bonnier high-rise in Stockholm, on the left the Bonniers Konsthall , which opened in 2006

The Bonnier AB is an international media company based in Stockholm . The focus of the company is on book and magazine publishers . The group also has interests in television channels (e.g. TV4 ) and film companies (e.g. Svensk Filmindustri ). A total of 175 companies in 17 countries belong to the group (as of 2010).

Gerhard Bonnier was born as Gutkind Hirschel in Dresden in 1778 and emigrated to Copenhagen in 1802 . There he changed his name to Bonnier and from 1804 was first a bookseller, then a publisher.

His son Adolf worked as a bookseller in Gothenburg from 1827 . Two years later he moved to Stockholm. There he opened a publishing house and published the first book in 1832, the Swedish translation by Christoph von Schmids Heinrich von Eichenfels .

His younger son Albert Bonnier also moved to Stockholm and worked with his brother from 1839 to 1865. He also founded a Förlagsbyrå in 1837 , which traded as Albert Bonniers Förlag from 1858, whose first product was the satirical pamphlet Bevis att Napoleon aldrig har existerat by Jean-Baptiste Pérès . This was the Swedish translation of the German edition. In 1856 he acquired Hörbergska boktryckeriet , a printing company in Riddarholmen . In 1865 the company and the publishing house moved to Mäster Samuelsgatan No. 19 (at that time the street was still called Ålandsgatan). From 1877 to 1887 Albert Bonnier was president of Svenska bokförläggareföreningen , which he had already joined in 1844 shortly after it was founded. Albert's son Karl Otto Bonnier (1856–1941) was a partner in the company from 1886, and in 1900 he took it over entirely. He moved, among others , August Strindberg , Verner von Heidenstam , Gustaf Fröding , Selma Lagerlöf and Hjalmar Söderberg . He made Bonniers Sweden's leading literary publisher.

Gerhard Bonnier's youngest son, David Felix Bonnier (1822–1881) took over the family bookstore in Gothenburg in 1842 and founded his own publishing house a year later. From 1859 he published the daily newspaper Göteborgs-Posten . However, this now belongs to the Stampen Group .

The media company is still family-owned and managed in the form of a stock corporation. Jonas Bonnier (* 1963) has been the chairman of the board since January 2008 .

The Bonnier skyscraper in downtown Stockholm was built to designs by the architects Ivar Tengbom and his son Anders Tengbom and inaugurated in 1946. In addition, the Bonniers Konsthall for contemporary art was opened in Stockholm in autumn 2006 .

The websites belong to the Bonnier Digital division , whose CEO is Casten Almqvist (* 1962).

Publications of the Bonnier group

Today around 150 companies belong to the Bonnier Group, in Sweden the daily newspapers Dagens Nyheter , Expressen and Sydsvenskan . In Germany, the Bonnier Group is one of the four major book publishing groups (next Weltbild publishing group , Verlagsgruppe Georg von Holtzbrinck and Random House / Bertelsmann ). The National Geographic Magazine is published by Bonnier for all Scandinavian countries.

The Bonnier publishing house published various dictionaries. One of the first ever Swedish-language was the four-volume Konversations- och universallexikon. Allmän ordbok för alla samhällsklasser , published from 1856 to 1866. It was followed by the Bonniers Konversationslexikon from 1922 to 1929 . The work was in 12 volumes and the main editors were Yngve Lorents and Gotthard Johansson . A new edition appeared between 1937 and 1949, this time in 14 volumes under the direction of Axel Elvin . It formed the basis for Bonnier's Lexicon, which appeared from 1961 to 1967 with around 110,000 lemmas in 15 volumes . Uno Dalén was responsible for this .

In 1993, Bonnier bought German publishers for the first time - these were arsEdition , Carlsen and Piper . Together with the later acquired publishers Malik , Pendo , Econ , List , Ullstein , Thienemann and the Munich publishing group , they now belong to Bonnier Media Germany , based in Munich.

In addition, the Bonnier group holds thirty percent of Bisnode , a large European provider of business information . Bisnode was created in 2005 from the merger of Bonnier Business Information, to which Hoppenstedt and Dun & Bradstreet belong, and Infodata .

Since February 2015, Bonnier has also been active in the press sector in Germany with the takeover of 51% of BF Blogform Social Media by the international subsidiary Bonnier Business Press . Blogform's best-known brand is Deutsche Wirtschafts Nachrichten (DWN).