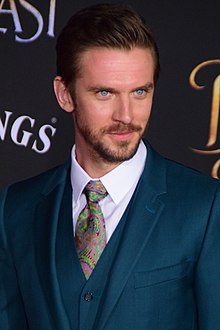 Dan Stevens at the premiere of Beauty and the Beast

Stevens, born in Surrey , was a scholarship holder at the prestigious Tonbridge School and later at Cambridge University . In Cambridge he was a member of the Cambridge Footlights theater company and studied English literature at Emmanuel College . He has worked with theater directors such as Sir Peter Hall and Samuel West in the UK and USA . In 2005 he was nominated for the Ian Charleson Award for his role as Orlando in As You Like It .

In 2006 he played the lead role of Nick Guest in the BBC adaptation of Alan Hollinghursts with the Booker Prize winning novel The Line of Beauty ( "The Line of Beauty"). In the same year he was the Simon Bliss in Hay Fever by Noel Coward in the Haymarket Theater on the stage, along with Peter Bowles and Judi Dench and directed by Peter Hall . Also for the BBC , he played Lord Holmwood in the 2006 film version of Dracula with Marc Warren , Sophia Myles and David Suchet and a year later the role of Basil Brookes in the television film Maxwell . In 2008, Stevens played Edward Ferrars in the BBC television series Sense and Sensibility and appeared in Bill Kenwright's new production of Noël Coward's play The Vortex .

New Year 2009 he was on British television on ITV1 in Marple: Nemesis and also in early 2009 as Hildegard Knef's second husband David Cameron in the biography Hilde in German cinemas. From June to September 2009 he appeared again in London's West End and played the role of Septimus Hodge in the new production of Tom Stoppard's Arcadia ("Arcadia") at the Duke of York's Theater. In the same year he made the movie The Knowledge of Others . From 2010 to 2012, Stevens played in the ITV television series Downton Abbey Matthew Crawley, the cousin and heir of the Earl of Grantham. After the great success of the series, he was seen in a supporting role in the movie Vamps - Dating with Bite in 2012 alongside Alicia Silverstone .

Stevens has voiced a number of audiobooks, including Snakehead by Anthony Horowitz , The Dragon's Eye by Dugald Steer, and The Outcast by Sadie Jones . He has also read scenes from works of world literature for the series The Carte Noire Readers . B. Charles Dickens ' Great Expectations and Jonathan Coe ’s The Rotters' Club .