Croydon is a redirect to this article. Further meanings are listed under Croydon (disambiguation) . 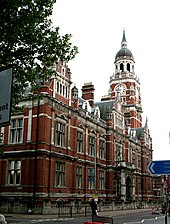 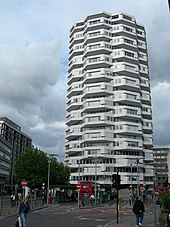 The 24-sided tower known as the NLA Tower 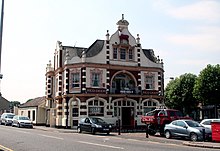 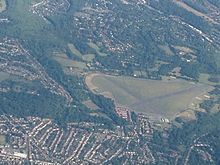 2013 aerial view of the Kenley Aerodrome ; the place was from 1917 to 1974 part of the Royal Air Force Station Kenley (RAF Kenley) in the Kenley district

The London Borough of Croydon [ kɹɔɪdn ] is a borough of London .

The London Borough of Croydon is located in the south of London , is the most populous of all boroughs and has grown into a major business center. When the Greater London administrative region was founded in 1965, the district emerged from the County Borough of Croydon and the Coulsdon and Purley Urban District in the county of Surrey .

Croydon has traditionally been a major industrial location and in some ways has also played a pioneering role in the development of London's transport system.

Croydon became a center of production during the Middle Ages. Here charcoal burners , tanneries and breweries were active. In the early 20th century, Croydon was an important industrial area for metal working. Gillett & Johnston was a bell foundry and tower clock manufacturer for over 100 years . The company Trojan Limited built from about 1920 cars.

In 1803 the Surrey Iron Railway was opened to Wandsworth , the first (horse-drawn) public railway line in the world. In the 19th century, Croydon was connected to the Brighton Main Line of the Southern Railway with East Croydon and South Croydon stations . On October 24, 1947, a rear-end collision between two suburban trains occurred in the southern entrance of the South Croydon station after the illegal intervention of an interlocking employee in fog. 32 people died, 142 were also injured. This was the worst accident that ever happened on the Southern Railway.

From 1920 to 1959, Croydon Airport , the main airport of London, was in the urban area , which was replaced by London Heathrow Airport and London Gatwick Airport . The Croydon Tramlink tram system opened in 2000 , 48 years after the last tram line in London closed. The Borough of Croydon has around 120 parks and public spaces that cover around 17.5 km².

The following personalities are associated with Croydon in one way or another. The high proportion of musicians and actors is explained by the fact that the BRIT School for Performing Arts & Technology is located in Croydon.