The kagu ( Rhynochetos jubatus ) is a duck-sized, flightless bird that is endemic to the island of New Caledonia . Remotely similar in shape to a pigeon, but with a much longer beak and long legs compared to pigeons, it represents a family of its own that was traditionally assigned to the crane birds (Gruiformes), but is now placed in the order Eurypygiformes together with the sun rail .

The kagu is about the size of a duck (length 55 cm) and has an average weight of 900 grams. It has pale gray plumage. The wings of the hand are banded in black and white; this striking pattern is only visible when the animals spread their wings. Unlike many other flightless birds, the wings are not reduced in size; however, the flight muscles are stunted. Nevertheless, the wings are often used: To keep the balance when climbing, they are spread, and they are used in courtship and territorial fights. Then the noticeable dark gray-white banding of the flight feathers is visible. It is also possible to glide from elevated waiting areas to the ground or glide downhill to escape predators.

On the top of the head, Kagus wear long feathers that reach over the back and are usually barely recognizable. In the state of excitement, the head can be raised. A specialty of the Kagus are powder down , special feathers that constantly grow back and the tips of which disintegrate into a fine dust that is used for personal hygiene. The powder downs are a parallel to the herons and gave rise to speculation about a relationship between the two taxa .

The eyes are large and dark red. The legs are orange-red; they are relatively long and strong. Most of the time the Kagu moves leisurely, but it can also run quickly on the run. The beak is also red, narrow, pointed and about 6 cm long; it is suitable for poking around in the ground. The nostrils can be closed with flaps to prevent particles from entering; these flaps are a unique feature in the bird world.

There is no externally visible gender dimorphism . However, the calls from males and females are different. In both the sounds resemble the barking of a young dog; in the female, however, the individual call components are shorter and are presented more quickly than in the male.

Kagus live exclusively on the island of New Caledonia . A majority of the birds now live in the protected Parc de la Rivière Bleue, whereas in the past kagus were probably evenly distributed over the island and went to the beaches themselves. Today Kagus mostly hide in forests, but also live in shrubbery bush. They avoid forests with too dense undergrowth as well as completely open land. In the mountains they occur up to an altitude of 1400 m.

The kagu is a diurnal bird that lives solitary outside of the breeding season. A couple and their offspring live in an area of around 20 hectares. This area is aggressively defended against conspecifics. Wings and beaks are used in territorial fights; however, serious injuries as a result of these fights have never been observed in the wild, but have been observed in captivity, where the inferior birds cannot evade. In a state of excitement, the head is straightened and the wings spread out so that the black and white banding becomes visible. Outside of the breeding season, the partners stay in the area, but have separate action spaces that can, however, overlap.

The kagu usually goes to a branch to sleep. Because of its inability to fly, these must be low branches that can be reached by climbing from the ground. The Kagu only sleeps protected on the ground in colder altitudes. 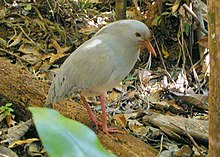 As a pure carnivore, the kagu feeds on lizards, worms, snails, insects, spiders and millipedes. It is noteworthy that he does not disdain those millipedes, which are inedible for other birds because of their poisonous secretions. To search for food, the kagu digs through the leaves and the ground with its beak. Regularly be Gewölle regurgitated containing indigestible parts such as snail shells or exoskeleton.

Kagus live in monogamy . The couples bind for life. The breeding season falls between June and August, although some stragglers breed well into December. Only one young is raised per year, which is a common breeding rate for island endemics.

Only piled leaves serve as a nest. The only egg is 4.5 × 6.2 cm. Both parents incubate alternately for about 35 days. Unlike the adult birds, the young kagus in gray-brown camouflage colors are perfectly adapted to the forest floor. They stay in the nest for three days before they begin to roam. They are fed by their parents for a total of 14 weeks. After that they are independent, but often stay in their parents' territory and are tolerated there as long as they do not mate. Some Kagus stay in their birth territory until they are six years old.

Life expectancy in captivity is 30 years and more, in the wild it has been proven to be 15 years. 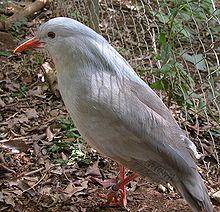 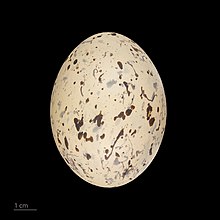 For the local Kanaks , kagus (indigenous kavou or kagou ) were of great importance. Kagu feathers were part of the chief jewelry and the calls of the kagus were imitated during ceremonies. The kagus were chased and eaten too. The Europeans ate kagus too, albeit to a far lesser extent.

Today the kagu is something like the unofficial "national bird" of New Caledonia. It adorns the logos of numerous companies, especially those in the tourism industry, and souvenirs with Kagu motifs are sold for tourists.

The IUCN lists the Kagu in the status endangered (endangered). While the hunting by the Kanaks could not harm the population of the birds in the past, the problems began with the landing of James Cook on the island in 1774. He brought dogs with him, some of which he gave to the locals. These now hunted kagus with the help of dogs, while other dogs feral and uncontrollably tore kagus. Pigs, rats and cats were also introduced to New Caledonia by the Europeans, and these are especially dangerous for young birds and eggs. Another problem is ongoing deforestation ; today only 20% of New Caledonia's original forests exist.

300 Kagus live in the Parc de la Rivière Bleue, 490 elsewhere. The number of individuals in the park continues to increase while outside it decreases. The total population remains stable overall. Nouméa Zoo has had a breeding program since the 1970s ; the resulting birds are repeatedly released into the wild.

From 1997 a few zoological institutions outside New Caledonia, including the World Bird Park Walsrode , Kagu pairs were made available for the breeding program. Since then, the number of animals in human care has increased significantly through successful breeding.

In addition to the recent Kagu, a fossil species Rhynochetos orarius has been described, which also lived on New Caledonia 2000 to 4000 years ago. Since it is very similar to the Kagu, its status as a separate species is controversial. No older Kagu fossils are known.

When it was discovered, the kagu was initially assigned to the herons . It was not until the late 19th century that the decision was made to belong to the crane birds, mainly because of the internal anatomy. However, the closer relationship among the crane birds was controversial. The South American sun rail ( Eurypygas helias ) as the closest relative is being discussed . A sister group relationship between Sonnenralle and Kagu has since been confirmed in further studies.

Recently, the kagu and the sun rail were placed in the new order Eurypygiformes , which was also recognized by the International Ornithological Congress and the American Ornithologists' Union.

However, it is unclear who the closest living relatives of this taxon are. They could perhaps be the last remnants of what was once a much larger clade of birds, including the extinct families Aptornithidae and Messelornithidae , which were spread across Gondwana and separated by the drifting apart of the continents

Some features are unique in the entire bird kingdom. These include the outer valves over the nostrils and the unusual composition of the blood , which contains far fewer red blood cells with an extremely high percentage of hemoglobin per red cell than the blood of all other birds analyzed on it.