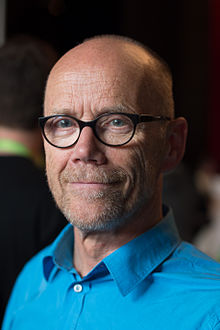 Erik Spiekermann (born May 30, 1947 in Stadthagen ) is a German designer , typographer , type designer and author. Some of his writings, especially FF Meta and ITC Officina , are considered modern classics by experts. Spiekermann is honorary professor at the Bremen University of the Arts . 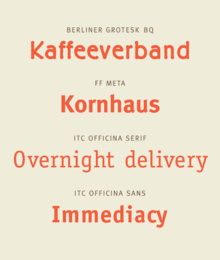 Erik Spiekermann studied art history in Berlin and financed his studies, which he broke off prematurely, by running a cellar print shop and playing bass in bars. He then moved to London with his wife and children, where, in addition to teaching and a. at the London College of Printing and worked as a consultant for large design companies. It was there that he created his first font designs for H. Berthold AG (LoType, Berliner Grotesk).

In 1979 Spiekermann founded the MetaDesign design agency in Berlin with Florian Fischer and Dieter Heil and worked primarily for companies in the graphic industry - including H. Berthold AG, Scangraphic, Linotype , Adobe and Apple .

In 1989 Spiekermann - together with his wife Joan - founded Fontshop AG in Berlin , one of the first mail order companies for computer fonts . In 1990 - again together with his wife and also with Neville Brody - the independent font manufacturer (foundry) FSI FontShop International was founded . In its FontFont library, which is of great importance today as a digital font library, Spiekermann published his fonts with immediate effect , including modern classics such as FF Meta , FF Meta Serif, FF Info or FF Unit. Spiekermann always supported and encouraged other font designers, such as B. Albert-Jan Pool , whom he inspired to design the successful FF DIN , or Ole Schäfer , who made him z. B. supported the expansion of his ITC Officina and FF Info fonts .

In 1990 Uli Mayer-Johanssen and Hans Ch. Krüger joined the management of his agency, and the name was changed to MetaDesign plus . In 1992 an office was opened in San Francisco, one in London in 1995 and one in Zurich in 2000. MetaDesign Berlin oversaw projects such as the passenger information system for the Berliner Verkehrsbetriebe , for whose corporate design the FF Transit was developed from the Frutiger, which is optimized for the special purpose . Projects were and are the graphic image of the city of Berlin, the control system of the Düsseldorf airport and the lead agency for the corporate design of Volkswagen and Audi . With the London office he won the 1998 competition for the design of the image of the city of Glasgow as the UK City of Architecture & Design in 1999 .

Due to differences in content, Spiekermann left MetaDesign in the summer of 2000. Shortly afterwards, he redesigned The Economist in London and founded the branding and design agency United Designers Network with offices in Berlin, London and San Francisco. Since 2007 the agency has operated as SpiekermannPartners and at the beginning of 2009 as EdenSpiekermann .

Spiekermann is honorary professor at the Hochschule für Künste Bremen , past president of the International Society of Typographic Designers and a member of the executive committee of the International Institute for Information Design and the German Design Council and the Association Typographique Internationale (ATypI). He is the author of several specialist books on type and typography as well as numerous articles and essays. He has also been a member of the advisory board of the non-profit online platform youvo.org since the beginning of 2017 .

"I have a very emotional, if not libidinal, relationship with letters."