The company H. Berthold AG was founded in 1858 by Hermann Berthold as the "Institute for Galvanotype" and in 1896 converted into a stock corporation. In the beginning, the company manufactured brass lines and carried out electroforming work for letterpress printing. The type foundry was added later and the company became the world's largest type foundry in the 1920s . H. Berthold AG later produced devices for photo typesetting , but font production has always remained a core component of the company. In 1993 H. Berthold AG had to file for bankruptcy due to excessive indebtedness and was liquidated by a decision of the Berlin bankruptcy court.

In 1858 Hermann Berthold founded an institute for galvanotyping at Wilhelmstrasse 1 in Berlin , which dealt with the steeling of copper plates and electroforming work for letterpress printing. From 1861, Berthold worked with G. Zechendorf for three years and incorporated a type foundry , a brass line factory and a stereotype workshop into the company . The company was called "Zechendorf & Berthold" at that time. After separating from Zechendorf, Berthold concentrated on brass lines, electroplating and tool manufacture. In 1868 the factory moved to a new building behind the house at Belle-Alliance-Straße 88 (today Mehringdamm 43) . During this time he invented, among other things, the wedge lever lock on the angle hook . The company expanded its brass line production and was the first to produce lines in eighths of a petit thickness . From 1878, Berthold introduced the German standard system for font height with the typometer . From then on, the printing companies used written material in the same amount and Berthold was able to supply a uniform market. The founder Hermann Berthold handed over the management of his company to his successor Alfred Selberg on March 14, 1888.

Development of the joint stock company

Selberg managed the company until 1891. His successor was Balthasar Kohler, who had been with the company since 1880 and converted it into a limited partnership called “H. Berthold Messinglinienfabrik and Type Foundry ". In 1894, the neighboring plot of land at Belle-Alliance-Strasse 87 (now Mehringdamm 45) was purchased in Berlin and an extension was built one year later. On March 11, 1896, the company was converted into a stock corporation - Hermann Berthold AG. Balthasar Kohler became its director.

The Berthold company operated a steady policy of expanding and buying up. Numerous type foundries at home and abroad were taken over. In Germany, branches were established and businesses expanded. It started with the purchase of the Gustav Reinhold type foundry in 1893, through whose business relationships abroad contacts were made to Denmark, Sweden and Finland. Reinhold also became a partner in the company and a member of the board of directors. Four years later, the Bauer & Co. type foundry in Stuttgart was acquired and a brass line factory was attached to it.

Further acquisitions were made in 1900 with the Georg Russ & Co. foundry in St. Petersburg , a foundry in Moscow in 1901 and the Rust & Co. foundry in Vienna in 1905. Oskar Jolles replaced Reinhold on the board. In Germany, the main branch in Berlin was enlarged several times with new buildings, most recently in 1910 when the third new building was occupied. With the establishment of a branch in Leipzig- Paunsdorf in 1918, the company became the world's largest type foundry at the time. The number of available fonts increased, because when the foundries were bought, their font range was also taken over.

In 1911, the company's “final rehearsal” was published, an 850-page volume of type samples in octave format. It contained typeface samples of all available typefaces in a systematic order.

During the First World War , Berthold also had to experience restrictions. Rising raw material prices and problems with the energy supply restricted production. The contact to branches abroad was partially lost. By 1916, however, eighteen new fonts had been created. In 1917 Erwin Graumann from the bought foundry Gursch became the new director of Berthold.

In 1926, Berthold acquired the Viennese type foundry Poppelbaum together with the D. Stempel AG type foundry. The companies expanded their cooperation by purchasing 50% of the shares in Berthold's Vienna subsidiary, while in return Berthold took over half of the shares in Erste Ungarische Schriftgießerei AG from Stempel.

After further changes in the board of directors (Oskar Jolles died in 1929, Erwin Graumann, who joined in 1918 three years later), Carl Graumann, Otto Krause and Curt Thier took over management of the company in 1932. In 1938 Berthold AG was one of the very few stock corporations that still had two Jewish supervisory board members: Heinz Pinner from Ullstein-Verlag and Bernhard Merzbach from the bank of the same name. During the Second World War , sales could be kept stable until 1944. After the Budapest branch was lost, the main building in Berlin was bombed in 1945, causing the entire warehouse to burn down. In the same year, the locations in Berlin and Stuttgart started again to produce brass lines and manual typesetting.

Entry into the photo typesetting technique 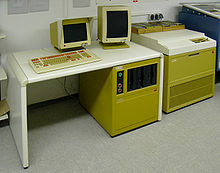 After the death of Krause and Graumann in 1953 and 1956, Curt Thier became director of Berthold AG. In the years that followed, the company focused more on the new photo technology. In 1951 the company took a share in Hoh & Hahne Hohlux GmbH, of which Berthold was a co-founder. This company manufactured reproduction machines. The development of our own photo typesetting machines began with the Diatype . Their prototype was presented at Drupa in 1960 . Berthold manufactured other generations of photo typesetting machines, initially mechanical ones with writing templates (e.g. the Diatronic , 1967), later also electronically controlled (e.g. the ads, 1977). The production of brass lines and writing material for metal typesetting was discontinued on October 31, 1978. A large part of the company's own fonts was also converted for the new typesetting process.

H. Berthold AG was mainly known as a provider of fonts. At the time of the phototypesetting, however, it was actually more of a machine factory; the majority of the turnover was achieved with the sale of photo typesetting machines.

A decline in demand for these products brought the company into financial difficulties towards the end of the 20th century. Ultimately, H. Berthold AG had to file for bankruptcy in 1993 due to over-indebtedness and was liquidated by a decision of the Berlin bankruptcy court.

For this reason, there was no legal successor to the company, which led to various companies claiming this status for themselves and selling the licensed fonts of Berthold AG. The fonts were offered at bargain prices primarily through the eBay auction house .