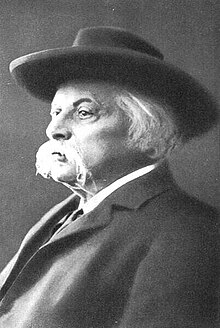 Karl Goldmark (born May 18, 1830 in Keszthely , Kingdom of Hungary in the Austrian Empire , † January 2, 1915 in Vienna ) was a Hungarian-Austrian composer , music teacher and violinist . His first name is often written Carl according to the spelling that was valid until 1901/1902; Károly is common in his native Hungary .

Goldmark was the son of a Chasan , a Jewish cantor. When he was four years old, his family moved to the Siebengemeinde Deutschkreutz in Burgenland , which at that time belonged to the Hungarian part of the Habsburg Empire . The family lived there in poor conditions. Goldmark's older brother Joseph Goldmark joined the 1848 revolution and had to emigrate to the USA. The pianist and composer Rubin Goldmark is the son of his brother Leo Goldmark, who also emigrated to the USA.

At the beginning of the 1860s Goldmark was the violist of a young string quartet. Johannes Brahms gave this quartet a rehearsal of his string quartet in F minor, which was later reworked several times. During this time, a friendship (not always without problems) developed between Brahms and Goldmark, which was expressed in numerous excursions to Baden or Klosterneuburg, for example, and in a joint trip to Italy. Goldmark was also one of the regular guests of the Johann Strauss family .

In 1863 Goldmark received a scholarship for music which was awarded to him by the three commission members of the Imperial and Royal Ministry for Cultus and Education , Eduard Hanslick , Heinrich Esser and Johann von Herbeck .

As a self-taught , he managed 1865 with the Sakuntala - Overture the first breakthrough, performed in Vienna in the 4th Philharmonic concert of the season 1865 / 1866. The critic Eduard Hanslick , who criticized the performance overall benevolent but took as many later criticisms of his " Abundance of dissonances “offense. On the premiere of Goldmark's overture in the spring , Eduard Hanslick asked whether “the dissonance king will win over himself to say goodbye to his cutting chords for the sake of May”, and in Goldmark's Sappho-Overture he branded its “jungle of dissonances”.

Gustav Mahler , who later had three Goldmark operas on his conducting list, Heimchen am Herd (1896), The Prisoners of War (1899) and the new production of The Queen of Saba (1901), and Goldmark met each other with a certain reserve. This was partly attributed to the fact that Mahler had always resented Goldmark for receiving the " Beethoven Prize " of the Gesellschaft der Musikfreunde in 1878 and 1881 as a member of the jury commission (consisting of Hanslick, Brahms, Hans Richter and Goldmark) in Vienna not to him, but to Robert Fuchs and Victor von Herzfeld .

Plaque at the house of death

Goldmark last lived in the Pratercottage in Vienna's 2nd district, Josef-Gall-Gasse 5, where a plaque on the house where he died commemorates him. Goldmark's grave is located in the Vienna Central Cemetery ( Old Jewish Cemetery, Gate 1 ). In 1925, the Goldmarkplatz in Vienna- Hietzing (13th district) was named in his honor ( during the Nazi era it was called Walter-Flex- Platz).

At the end of the 19th century, in his later years, Goldmark was a very popular composer who was showered with superlatives. Jean Sibelius , a temporary student of Goldmark from 1890, wrote in 1892 that he had an extraordinary reputation in Vienna and that in many places people would be envied for being his student. Julius Korngold , successor to Eduard Hanslick, spoke of the "Goldmark cult". Karl Kraus certified him to be the greatest living music dramatist since Richard Wagner's death. After Brahms' death he was seen as the last exponent of the disappearing late romantic age, although the Hungarian music world has given him greater attention as a “ national composer ” to this day.

His best-known work is the opera The Queen of Sheba , premiered in 1875 , with which he became famous overnight. At that time, their opulent sound was seen as the counterpart to Hans Makart's monumental paintings.

Hanslick, who feuded everything in the vicinity of Richard Wagner , believed that all Goldmark operas were too close to Richard Wagner. Many other critics also stigmatized Goldmark as a Wagner pig. Hugo Wolf was the most ruthless in his criticism of Goldmark . The opera The Queen of Sheba was still present at the Vienna State Opera until 1936 , when the National Socialists' verdict finally brought the reception to an end. After 1945 there was practically no room for Vienna's Goldmark music business.

His musical models were Felix Mendelssohn Bartholdy , Robert Schumann and later Richard Wagner . His only encounter with Wagner is documented in 1860. Around 1900 he was a member of Gustav Mahler and Ludwig Bösendorfer on the committee for the purchase of a new organ for the Vienna Musikvereinssaal . In his later years he received numerous honors and an honorary doctorate from the University of Budapest .

In addition to symphonies , other orchestral works , chamber music , choral works and songs , he composed a number of operas .

Goldmark's early string quartet in B flat major, op. 8, has recently been attracting a certain amount of attention and was recorded on CD by the Lajtha Quartet ( Hungaroton , 1993) and the Klenke Quartet (Classic, 1998).

Works for violin or cello and piano

In 1980, in Deutschkreutz in Burgenland , the house in which Goldmark spent the years 1834 to 1844 was bought by the municipality and the Goldmark Museum was built there.