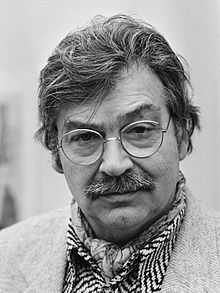 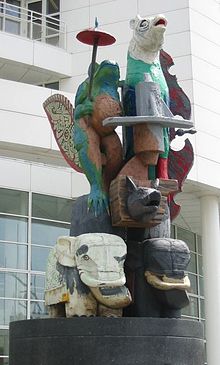 Statue in The Hague

Karel Appel (actually Christiaan Karel Appel ; born April 25, 1921 in Amsterdam ; † May 3, 2006 in Zurich ) was a Dutch painter , graphic artist and sculptor . He was a co-founder of the artist group CoBrA .

Appel spent his youth in a working-class Amsterdam neighborhood, where his father ran a hairdressing business. At the father's request, he received training as a hairdresser. After disputes about his career aspirations as a painter, he left home and studied from 1940 to 1944 at the Reich Academy of Fine Arts in Amsterdam . In 1948 he founded the Nederlands Experimentele Groep with Corneille and Constant , whom he had met during their studies . In the same year he founded the artist group CoBrA with other artists.

In 1946 Appel had his first solo exhibition in Het Beerenhui s in Groningen and shortly afterwards took part in the Jonge Schilders (Young Painters) exhibition at the Stedelijk Museum in Amsterdam. During this period he was heavily influenced by the art of Picasso , Matisse and Dubuffet . He created the mural Inquiring Children in the canteen of the townhouse in Amsterdam. The outrage of the staff and the population about the picture, which is reminiscent of children's drawings, led to the painting being veiled for ten years. In 1950 Appel moved to Paris . The international breakthrough followed in 1953 when his works were shown at the São Paulo Biennale . There he was awarded the Grand Prize for Painting. In 1951 he created a fresco for the Stedelijk Museum in Amsterdam, and in 1959 he created a mural for the UNESCO building in Paris. Appel was a participant in documenta II (1959) and also in documenta III (1964) in Kassel .

He tried again and again to combine his painting with other arts. In 1962, Appel worked with Bert Schiebeek on the theater production Een groot dier ("A large animal"). In 1970 he recorded some pieces of music with Merrill Sanders and Chet Baker . In 1987 he designed together with the dancer and choreographer Min Tanaka under the title Peut-on danser le paysage? a dance project for the Paris Opera , which has since made guest appearances at the Brooklyn Academy of Music in New York and at the Nederlandse Opera in Amsterdam. In 1991 he worked with Allen Ginsberg and Gregory Corso on the "Poetry-Painting Series", a combination of poetry and painting. From 1994 he and Tanaka developed several sets for Dutch opera houses. At the Nederlandse Opera in 1994 he also created the equipment for the world premiere of the opera Noach by Guus Janssen and Friso Haverkamp in a production by Pierre Audi . For the Salzburg Festival 2006 Appel designed the set for Mozart's Die Zauberflöte (directed by Pierre Audi, conductor Riccardo Muti ).

By 1990 the artist owned studios in New York , Connecticut , Monaco and Tuscany . He often stayed in New York, but also lived in Florence and commuted between the United States and Europe.

In 1999, Appel set up a Karel Appel Foundation (Karel Appel Foundation), to which he transferred all rights from works that had been created or still to be created. This decision was confirmed again in 2005 in a will drawn up in Zurich. In the last years of his life he often stayed in Zurich. He died there on May 3, 2006. Appel was buried in the Père Lachaise cemetery in Paris.

Appel left an extensive body of work consisting of around 10,000 sculptures , sculptures, drawings and paintings . The artist is best known for his paintings, and his entire work has only recently attracted attention. In addition to the CoBrA , Appel was also clearly influenced by Picasso , Surrealism and Art brut .

The period of the avant-garde artist group CoBrA, which existed from 1948 to 1951, clearly shaped Appel's style. The influence can be found in his paintings in a primitive, rough representation, in a garish color scheme and a childishly naive style of painting. His motifs were greatly simplified, initially also graphically stylized portraits of landscapes, animals and people. After the CoBrA phase, the images lose their figuration and the character of the aggressive and brutal increases. He approaches American abstract expressionism, but tries to differentiate himself from it with a change of style. “Abstract painting is a fashion, a product of style. I always use shapes based on speaking objects. You should look at something as a whole and not get lost in the details, ”said Appel in an interview at the time. From the 1970s onwards, his work became more energetic and raw until he reverted to figurative representations in the 1980s. His pictures become gloomy and dark, the garish colors almost completely disappear, only to return in his late phase, at the end of the 1980s.

He used the assemblage technique for his sculptures . He collaged various materials, objects and patterns, which he also worked on with acrylic paints in the later phase .

Works by Karel Appel include a. to visit in the Cobra Museum .