This article describes the fruit; for the band see grapefruit (band) . 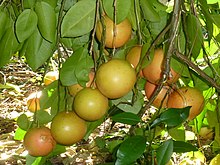 Fruits on the tree

The grapefruit ( Citrus × paradisi ), seldom also called Adam's apple or paradise apple , is the fruit of the grapefruit tree , a citrus plant that is a subtropical tree from the diamond family (Rutaceae). It is a cross that emerged from the orange ( Citrus × sinensis ) and grapefruit ( Citrus maxima ). In colloquial language (especially in northern Germany) it is therefore often referred to as grapefruit . The name grapefruit is a combination of the English words grape for grape and fruit for fruit. It refers to the vine-like shape in which the fruits grow on the tree. Other names are pumpkin orange and melon orange .

The evergreen tree is usually around five to six feet tall, but can grow up to 15 feet tall. The young shoots are angular and rarely slightly hairy.

The leaves are dark green, long (up to 15 cm) and thin. The shape is oval, the tip is blunt, the base of the leaf is rounded. The petiole is strongly broadened, the leaf blade is clearly separated from the petiole (unifoliates leaf).

The fragrant flowers are individually in the leaf axils or in little-flowered inflorescences. They consist of five fused sepals and five free, white colored petals . The ovary is oval and clearly from the pen sold. The 20 to 25 stamens are fused with the stamens to form several groups.

The round fruit, a berry , has a yellow skin, red-fleshed species can have a reddish tinge on the skin. The fruit is about 10-15 cm in diameter and has bitter flesh that is divided into segments. The individual segments have grown together and cannot be easily divided. The color of the flesh varies depending on the variety from a light yellow to a deep ruby ​​red. The central axis is usually completely filled with tissue. The seeds are smooth, white inside, they contain several embryos. Commercial varieties are mostly seedless.

The bitter taste of grapefruit is due to the glycoside naringin , which is also contained in grapefruit and pomelos .

In 2018, around 9.4 million tons of grapefruit (including pomelos ) were produced worldwide . Europe produced 86,971 t in the same period, the largest producers being Spain, Cyprus and France.

The ten largest producers in the world together generated 87.4% of the total harvest in 2018.

The different types of grapefruit are divided into two main groups:

The white grapefruits, which have yellow pulp, and the red, the American Ruby variety, which was patented in 1929 with its pink pulp. Based on this, further red meat selections, mostly in Texas, were selected. The selections Rio Red, Star Ruby and Flame have the highest market shares and the deepest red pulp color. There are varieties with numerous seeds , but also selections almost entirely without seeds.

The variety Oroblanco , a cross between Citrus maxima 'Siamese Sweet' and Citrus paradisi 'Marsh' is commercially available as Sweetie offered

The fruit sold under the trade name Sweetie with the correct variety name Oroblanco ( es : white gold ) is a cross between Citrus maxima 'Siamese Sweet' and Citrus × paradisi Marsh H4 and was created in California in 1958 .

There is also minneola , a cross between mandarin and grapefruit.

It is believed that the grapefruit originated from a spontaneous cross between the grapefruit and the orange in Barbados around 1750 . In 1823 it came to Florida, where it has been grown commercially since 1875. Today it is grown in almost all subtropical countries in the world. The main producers are the USA with plantations in Florida and Texas . The main suppliers for Europe are Israel , Cyprus and Spain .

Relationships of the grapefruit

In 1989, during investigations on a blood pressure drug, a significant reduction in the effectiveness of grapefruit consumption was discovered by chance. It is now known that some ingredients in grapefruit interact with certain medicinal products . These interactions can be serious.

In particular, the substances naringenin , 6 ', 7'-dihydroxybergamottin and bergamottin contained in grapefruit , which inhibit cytochrome P450 1A2 in the liver, or naringin , which inhibits CYP3A4 , delay the metabolism and thus the (hepatic) Degradation of various substances (which increases their bioavailability many times over). This also significantly influences the effect and duration of action of various drugs and medicines, such as those of cyclosporine A , dextromethorphan , estradiol , felodipine , ivabradine , caffeine , midazolam , nifedipine , simvastatin , tacrolimus , terfenadine , verapamil , sertraline .

Naringin, the glycoside of naringenin, is responsible for another important interaction in grapefruit. Naringin inhibits the function of the anion - transport peptide OATP1A2 in the intestine. Medicinal substances, which are mainly absorbed from the intestine into the body via this transporter, only reach the blood in a greatly reduced amount of around 50%, which means that the desired concentration is not achieved. So far, a reduced bioavailability has been demonstrated for various substances, including atenolol , celiprolol , ciclosporin , ciprofloxacin , etoposide , fexofenadine , itraconazole , levofloxacin , quetiapine , talinolol .

It is therefore useful to find out about possible interactions with grapefruit products while taking medication.

Grapefruits, like other citrus fruits, also contain antioxidant substances, so-called radical scavengers, and the fiber pectin . In 2006 it was published that grapefruit not only helps you lose weight, but can also prevent diabetes mellitus . The effect is based on the fact that the sugar metabolism works better after eating grapefruit and therefore the blood sugar level is lower and thus less insulin has to be produced.