The Senegal is a 1086 km long power in West Africa . It is already mentioned by Pliny the Elder as botus (from the Phoenician-Hebrew "behemoth" to be translated as hippopotamus river) and by Claudius Ptolemy as Nias . The word Zenaga for the name of a language and an ethnic group that is native to southwestern Mauritania between the Atlantic coast and lower Senegal is a possible etymological origin for the name Senegal .

The river is created by the confluence of the Bafing and Bakoyé near the city of Bafoulabé in southwest Mali . On its way to the northwest it reaches the rain-poor Sahel zone and receives its last important tributary, the Falémé, from the left and south . From its confluence, Senegal forms the border between the countries Senegal and Mauritania and flows into the Atlantic at Saint-Louis .

Together with the Bafing, Senegal is 1,430 kilometers long.

A ten to 20 kilometer wide alluvial plain stretches on the left bank of Senegal, which is criss-crossed by impassable wetlands and watercourses. The Senegal stream has several successively here side arms formed initially by the Dioulol , followed by Diamel and from Doué . In Richard Toll flows from the south an important tributary that the Ferlo on the Lac de Guiers connects with Senegal.

An island of considerable size has formed in the alluvial plain between the main stream and the Doué tributary , the island of Morfil . In the so-called delta of the Senegal lower reaches, above and below the Diama dam , the island of Biffeche can be found.

A river island of particular historical importance is the Île de Saint-Louis near the mouth . It supports the historic city center of Saint-Louis and was the starting point for the development of the French colonial empire of French West Africa . It has been declared a UNESCO World Heritage Site.

While the lower reaches of Senegal can meander freely through alluvial plains, on the Atlantic coast a chain of coastal dunes created by wind and waves prevents it from uniting with the sea and forces it a kilometer north of the Île Saint-Louis , to follow the side of the dunes facing away from the sea to the south, until the fresh water finally finds the strength to pour over sandbanks into the sea. This estuary had shifted further and further south as a result of steady landings on the chain of dunes and finally formed a headland around 34 kilometers long, which was declared a national park south of the city of Saint-Louis as the bird paradise Langue de Barbarie .

The barrier effect and the length of the coastal dunes can be seen very well from a satellite photo taken during a flood on November 4, 1999, which shows how the entire city of Saint-Louis is surrounded by water. When a similarly threatening flood threatened the city in October 2003, local authorities ordered a 4-meter-wide puncture to be digged through the approximately 300-meter-wide headland about 6 kilometers south of the Île Saint-Louis and 25 kilometers from the mouth on October 3rd . In fact, this measure had the effect of a dike breach , which quickly expanded uncontrollably. After three days it was already 200 meters wide, six months later the opening was 800 meters wide and became the new estuary, while the old silted up and the former river bed became a lagoon . Incidentally, the piercing through the headland seems to have happened at about the point where it ended according to a nautical chart from 1747. 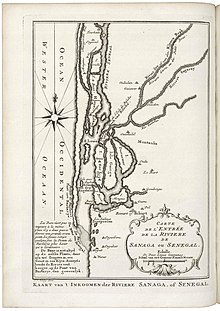 Nautical chart of the Senegal estuary 1747

Since then, currents, wind and waves have developed their own dynamics. Previously protected fishing villages were now exposed to the open sea and were devoured by it, not least because the sea level was rising and the gap in the coastal dunes widened to 5 kilometers, while the lagoon in the south was silted up at the same time. It was also shown that the estuary again tends to migrate south. The headland between the sea and the river has been proven by satellite photos to have gained around 5000 meters in length since 2003. For the national park and its bird life, these changes mean, apart from the fact that large parts of the sea had been devoured, a complete transformation of the living conditions.

The flow rate of Senegal, which fluctuates strongly over the course of the year, was measured in m³ / s over 71 years between 1903 and 1974 in Dagana about 207 kilometers from the mouth.

The climatic conditions in the catchment area of ​​Senegal

Senegal's catchment area extends over four countries: Senegal, Mauritania, Mali and Guinea . The information about the size is very different. They range from 289,000 km² to 483,000 km². However, the greatest differences in the information are due to the part in Mauritania where there is only little rainfall. Because the north is in the Sahel zone and in a desert climate, Senegal gets most of its runoff from the south. It receives a lot of water from the mountainous region of Fouta Djallon, especially through its source river Bafing .

The Diama dam , built in 1981, connects the Senegalese town of the same name with the village of Keur Massène in Mauritania. It lies in the fertile Chemama flood plain, halfway between Saint-Louis and the Mauritanian river port of Rosso . Before the construction, sea water penetrated up to 150 kilometers upstream. After the dam was completed, this was prevented and the river biotope was changed . The dammed lake is used as a drinking water reservoir , from which the Senegalese capital Dakar is also supplied. The now missing flooding with salt water leads to a steady improvement of the agriculturally usable area on the Senegal shore. For decades, the salty, depleted earth was unusable for use as arable land.

The Pont Faidherbe in Saint Louis

Some important traffic routes cross the river in the form of bridges and ferries . In Saint Louis, just before it flows into the Atlantic Ocean, there is the Pont Faidherbe , a steel truss bridge, in the city center . A non-asphalt road is connected to the Mauritanian side via the Diama Dam upstream. The most important crossing between the states of Mauritania and Senegal and along national roads is the Rosso ferry in the town of the same name. The closest bridge upstream is hundreds of kilometers further in Mali: the Kayes Bridge , which was built on the site of a ford .