It is located in the center of the state on the Upper Guinea threshold . The mountainous area has an area of ​​about 47,000 km² and is up to 1,538 m above sea level. The landscape, which is largely untouched due to the slow modernization, is determined by the mountains of Fouta Djallon with its numerous table mountains. It is characterized by the vegetation of the tropical dry forest . The locals use the land for growing crops, grain and corn. Animal breeding is limited to goats and cattle.

The Fouta Djallon region and the capital Labé are as good as not developed for tourism. The main reason for this is the poor infrastructure that is standard in all of Guinea. Electricity and running water are rare in the region. 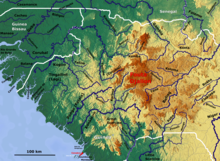 Map of the Fouta Djallon with the main rivers

The mountains of Fouta Djallon are the " water tower of West Africa". The rivers Senegal ( Bafing ) and Gambia have their source here and drain to the north. To the west it is the Rio Corubal via Guinea-Bissau and the Konkoure to the southwest. To the south, over Sierra Leone , it is the Little Scarcies and to the east the tributaries of the Niger , like the Tinkisso, flow . Senegal in particular benefits from the high rainfall in the mountainous region, as it hardly gets any additional water as it continues into the Sahel zone outside of the rainy season.

The name Fouta Djallon comes from the Dialonke , the original inhabitants of the area. From around 1700 to 1934 there existed the empire of the same name, founded by the Fulbe of Fouta Djallon , which was conquered by Karamoko Alfa and Ibrahima Sori in a jihad. Timbo, which is 42 kilometers northeast of Mamou, was the seat of the emir, which was occupied by the French in 1896.