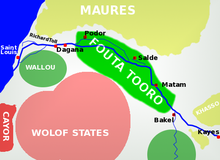 The Fouta Toro (other spelling Fouta Tooro and Futa Toro ; formerly also known as Mussukeba Sane ) is the land mainly on the left, southern side of the lower reaches of the Senegal River . The area extends from Bakel to Dagana just before Richard Toll .

In the 18th and 19th centuries the Fouta Toro was the heartland of the Tukulor , a population group that belongs to the Fulbe peoples. The Fouta Toro empire was founded in 1776 when the Islamic Almaami Abd-el-Kadr Toorodi defeated the animist empire Denanke , and was bordered by the Waalo empires in the west, the Jolof empire in the southwest, and Bondu in the southeast. At that time there were numerous tamarind forests in the flat area and millet and peanuts were grown by the local population . The empire was divided into four districts: Dimar , Toro , the actual Futa and Damga . The first capital was Thilogne .

Fouta Toro was subjected to France from 1860 onwards . The actual Futa, which had a republican form of government under an elective religious leader ( Almami , derived from Imam ), was able to maintain its independence for longer. France combined the areas with Dagana, Podor , Saldé and Matam to form the Saint-Louis district.

With the independence of Senegal and Mauritania , the Senegal River became the border between the two countries. The villages on the right bank of Senegal are now in Mauritania, those on the left bank in Senegal.